The Kiso River (木曽川, Kiso-gawa) is a river in the Chubu region of Japan roughly 229 km (142 mi) long, flowing through the prefectures of Nagano, Gifu, Aichi, and Mie before emptying into Ise Bay a short distance away from the city of Nagoya. [1] It is the main river of the Kiso Three Rivers (along with Ibi and Nagara rivers) and forms a major part of the Nōbi Plain. The valley around the upper portion of the river forms the Kiso Valley.

Parts of the Kiso River are sometimes referred to as the Japan Rhine because of its similarities to the Rhine in Europe.

The Kiso River embankment (木曽川堤, Kiso-gawa tsutsumi) was built in the Edo period and extends for a 47-kilometer length between the cities of Inuyama and Yatomi to protect against flooding. After a portion of this embankment was rebuilt after having collapsed due to record floods in May 1884, local volunteers brought in 1800 saplings of sakura trees at the request of the governor of Aichi Prefecture, replacing Japanese red pine trees which had formerly lined the embankment. These cherry blossoms included many unusual varieties including some wild cherry tree species, and specifically excluded the Somei Yoshino variety that had become extremely popular all over Japan. A seven-kilometer portion of this embankment between the cities of Ichinomiya and Kōnan has been designated as both a National Place of Scenic Beauty and Natural Monument since 1927. [2] The number of cherry trees gradually decreased due to natural attrition to less than 400 by 2001, but the city of Ichinomiya undertook a large-scale replanting campaign to bring the embankment back to its former appearance.

Other portions of the Kiso River in Inuyama, and Kakamigahara, Kani, and Sakahogi in Gifu Prefecture were designated collectively as a National Place of Scenic Beauty in 1934. [3]

Shinano Province or Shinshū (信州) is an old province of Japan that is now Nagano Prefecture. 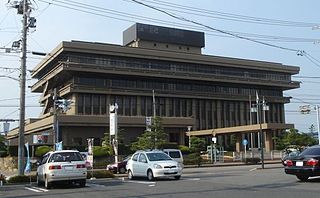 Ichinomiya is a city located in Aichi Prefecture, Japan. The city is sometimes called Owarichinomiya to avoid confusion with other municipalities of the same name, including Ichinomiya, Ichinomiya in Chiba Prefecture. As of 1 October 2019, the city had an estimated population of 379,654 in 161,434 households, and a population density of 3,336 persons per km². The total area of the city was 113.82 square kilometres (43.95 sq mi). 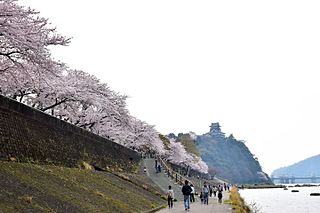 Inuyama is a city in Aichi Prefecture, Japan. As of 1 October 2019, the city had an estimated population of 73,420 in 31,276 households, and a population density of 980 persons per km². The total area of the city is 74.90 square kilometres (28.92 sq mi). The name of the city literally transliterates to "Dog Mountain". The name appears in historical records from 1336 AD, but its origin is unknown. 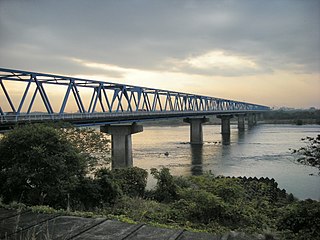 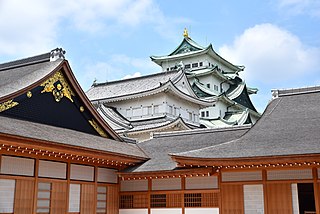 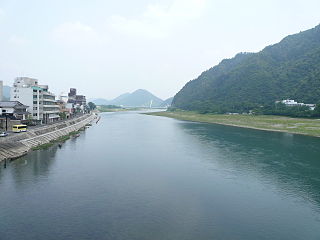 The Nagara River has its source in the city of Gujō, Gifu Prefecture, and its mouth in the city of Kuwana, Mie Prefecture, Japan. Along with the Kiso River and Ibi River, the Nagara River is one of the Kiso Three Rivers of the Nōbi Plain. Previously, the river was named Sunomata River. With a length of 166 km (103 mi), it drains an area of 1,985 square kilometres (766 sq mi) in the Chūbu region and empties into Ise Bay. The government of Japan classifies it as a Class 1 river. 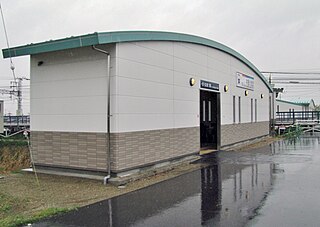 Kisogawa-zutsumi Station is a railway station in the city of Ichinomiya, Aichi Prefecture, Japan, operated by Meitetsu. 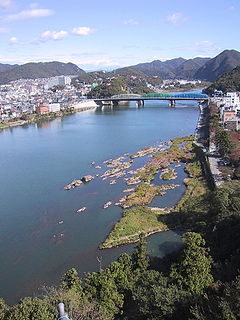 The Kiso Three Rivers refers to the three major rivers that make up the alluvial plain area of the Nōbi Plain of Japan. The three rivers are the Kiso River, the Ibi River and the Nagara River. Given their location, they are sometimes referred to as the Nōbi Three Rivers.

The Battle of Gifu Castle was a battle in August 1600 that led to the destruction of Gifu Castle in Gifu, Mino Province, Japan. The battle served as a prelude to the Battle of Sekigahara the following month. It pitted Oda Hidenobu of the Ishida Mitsunari western forces against Ikeda Terumasa, Ikeda Sen and Fukushima Masanori of the eastern forces and loyal to Tokugawa Ieyasu. The castle was destroyed as a result of the battle.

The Agi River is a river in Japan which flows through Gifu Prefecture. It is part of the Kiso River system. 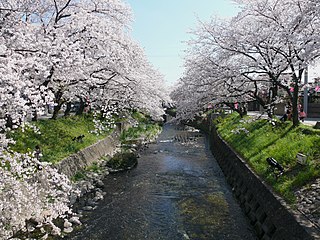 The Gojō River flows through Gifu and Aichi prefectures in Japan. It empties into the Shin River, which is part of the Shōnai River system.

The Japan Rhine refers to the valley of the Kiso River between Minokamo, Gifu and Inuyama, Aichi, Japan. This nickname was given to the region in 1913 by Shiga Shigetaka. The length of the Japan Rhine is about 13 km. Boat tours along the Japan Rhine were previously available, but the service was canceled in 2013 due to the negative business outlook resulting from an accident that occurred on August 17, 2011.

Hinokinai River Embankment is a nationally designated Place of Scenic Beauty in the city of Semboku, Akita Prefecture, Japan.