Toshimitsu Obata (小畑 敏満, Obata Toshimitsu, May 16, 1953 – November 20, 2015) known as Kitanoumi Toshimitsu (北の湖敏満), was a sumo wrestler. He was the dominant yokozuna in sumo during the 1970s. Kitanoumi was promoted to yokozuna at the age 21, becoming the youngest ever to achieve sumo's top rank, and he remained a yokozuna for a record 63 tournaments. He won 24 tournament championships during his career and was one of a series of truly great yokozuna who came from Hokkaidō, the northernmost main island of Japan. At the time of his death he still held the record for most bouts won as a yokozuna (670). Following his retirement in 1985 he established the Kitanoumi stable. He was chairman of the Japan Sumo Association from 2002 until 2008, and from 2012 until his death.

Born in Sōbetsu, Usu District, Kitanoumi began his professional career in January 1967 at 13, whilst still in middle school. He joined Mihogaseki stable, and was promoted to sumo's second highest jūryō division in May 1971 and the top makuuchi division a year later. [1] He won his first top division yūshō or tournament championship in January 1974 and was promoted to ōzeki immediately afterwards. He secured promotion to yokozuna just three tournaments after that. At 21 years 2 months, he was the youngest ever yokozuna, [2] beating the previous record held by Taihō by one month.

Kitanoumi was the most successful wrestler in sumo for the rest of the 1970s. His dominance, and perceived stern demeanour, meant that he was not that popular with the general public. [3] When he was defeated by underdog Takanohana in a playoff for the championship in September 1975, the audience threw so many zabuton—or cushions—into the ring in delight, that Kitanoumi said he could "hardly see the ceiling". [4] He was known for not offering a defeated opponent a hand to get back to their feet, [5] and was also notoriously monosyllabic when being interviewed by reporters. [6] His best year was 1978, when he won 5 of the 6 tournaments and won 82 out of a possible 90 bouts, a record that stood until 2005. [7] His chief rival during these years was Wajima, [8] but Kitanoumi was much more consistent. He was heavy at 169 kg, was extremely strong and had excellent balance. He was also remarkably injury free and rarely missed a tournament. From July 1973 until September 1981 he chalked up fifty consecutive kachi-koshi , or tournament records of at least 8 wins out of 15, which is a record for the top division. [7]

By the beginning of the 1980s he had a new rival, Chiyonofuji, who earned promotion to ōzeki and then yokozuna by defeating him in decisive matches in January and July 1981. In November 1981 Kitanoumi withdrew from a tournament for the first time. After that his record was patchy, with many absences. [8] His 24th and final title came in May 1984, with a perfect 15–0 record. This was seen by many as a fitting end to a great career and he wanted to retire after that tournament, but was persuaded by the Sumo Association to carry on until the opening of the new Ryōgoku Kokugikan stadium in January 1985. [4] Three days into the tournament, without winning a match, he announced his retirement. [8] He had been ranked as a yokozuna on the banzuke in 63 tournaments, which remained the most in history until Hakuho surpassed it in May 2018. [3] During his career he had won 951 matches, the most in history at the time (he was overtaken by Ōshio in 1987). Of those victories, 804 came in the top division (a record broken by Chiyonofuji in 1991), and 670 of those came at the yokozuna rank. [9]

Kitanoumi was honoured for his great achievements by being offered membership of the Japan Sumo Association without having to purchase a share ( ichidai toshiyori ). He was the second rikishi after Taihō to be given this honour. As a result, he was able to keep his sumo name after retirement. [10] He opened up his own training stable, Kitanoumi-beya, [1] taking several wrestlers from Mihogaseki stable who had already been under his wing. Kitanoumi stable is one of the largest in sumo, and has produced a handful of top division wrestlers over the years, such as maegashira Ganyū, Kitazakura and Kitataiki. He also inherited Russian wrestler Hakurozan, who joined the stable in 2006.

In 2002 Kitanoumi became head of the Sumo Association. He was the first chairman under the age of 50 in half a century, and his appointment was widely welcomed; [4] however, he came under pressure after a series of scandals hit sumo. These included the behaviour of yokozuna Asashōryū, who was suspended for two tournaments in 2007 but then allowed to return to Mongolia, the death of junior wrestler Tokitaizan at Tokitsukaze stable, and the dismissal of several top wrestlers for using cannabis. [4] When it became clear in September 2008 that one of them was his own wrestler Hakurozan, whom he had previously backed, Kitanoumi resigned his post, [11] apologizing for "the trouble I have caused to the Sumo Association and to fans". [12] He remained on the board of directors, in charge of running the Osaka tournament, [4] but had to resign from that position in April 2011 after another of his wrestlers, Kiyoseumi, was found guilty of match-fixing and forced to retire from sumo. [13] After Hanaregoma stepped down in February 2012, Kitanoumi returned to the role of chairman, the first person to head the association twice. [14]

Kitanoumi died of colorectal cancer and multiple organ failure on the evening of November 20, 2015. [3] He was in Fukuoka for the Kyushu tournament and was taken to hospital for anemia in the morning, after which his condition deteriorated. [15] A memorial service was held on December 22 at the Ryōgoku Kokugikan. [2]

Kitanoumi's favourite kimarite or techniques were hidari-yotsu (a right hand outside, left hand inside grip on the opponent's mawashi ), [3] yorikiri (force out) and uwatenage (overarm throw). 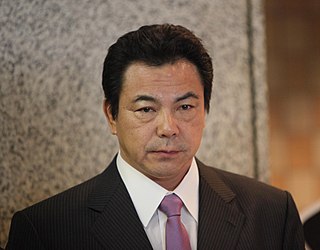 Chiyonofuji Mitsugu, born Mitsugu Akimoto, was a Japanese champion sumo wrestler and the 58th yokozuna of the sport. Following his retirement as a wrestler, he was the stable master of Kokonoe stable until the time of his death.

Taihō Kōki was the 48th yokozuna in the Japanese sport of sumo wrestling. He became a yokozuna in 1961 at the age of 21, the youngest ever at the time. He won 32 tournament championships between 1960 and 1971, a record that was unequalled until 2014. His dominance was such that he won six tournaments in a row on two separate occasions. He is the only wrestler to win at least one championship every year of his top division career, and he won 45 consecutive matches between 1968 and 1969, which at the time the best winning streak since Futabayama in the 1930s. He was a popular grand champion, especially amongst women and children. After retiring from active competition he became a sumo coach, although health problems meant he had limited success. When he died in January 2013 he was widely cited as the greatest sumo wrestler of the post-war period. Since then Hakuhō, who regarded Taihō as a mentor, surpassed his record by winning his 33rd championship in January 2015. Hakuhō Shō is a professional sumo wrestler (rikishi) born in Ulaanbaatar, Mongolia with Japanese citizenship. Making his debut in March 2001, he reached the top makuuchi division in May 2004. In May 2007 at the age of 22 he became the second native of Mongolia, and the fourth non-Japanese overall, to be promoted to the highest rank in sumo, yokozuna.

Hokuten'yū Katsuhiko (北天佑勝彦) was a sumo wrestler, from Muroran, Hokkaido, Japan. The highest rank he achieved was ōzeki which he held for seven years from 1983 until 1990. He won two top division yūshō or tournament championships. After his retirement as an active wrestler he worked as a sumo coach until his death in 2006 from cancer.

Hokutoumi Nobuyoshi is a former sumo wrestler from Hokkaidō, Japan. He is the sport's 61st yokozuna and won eight top division championships. He wrestled for Kokonoe stable, as did yokozuna Chiyonofuji, and the two were the first yokozuna stablemates to take part in a play-off for the championship, in 1989. After a number of injury problems he retired in 1992, and is now the head coach of Hakkaku stable. In November 2015 he was appointed the chairman of the Japan Sumo Association, following the death of Kitanoumi, initially to serve until the end of March 2016. He was then elected as head for a full term by his fellow board members in a vote held on March 28, 2016, and re-elected in 2018. 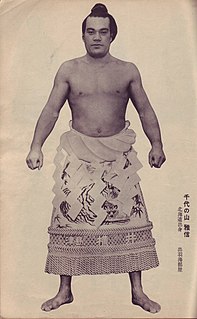 Chiyonoyama Masanobu was a sumo wrestler from Fukushima, Hokkaidō, Japan. He was the sport's 41st yokozuna from 1951 until 1959. He is regarded as the first "modern" yokozuna in that he was promoted by the Japan Sumo Association itself and not the House of Yoshida Tsukasa. He was the first yokozuna from Hokkaidō, which was also the birthplace of the subsequent yokozuna Yoshibayama, Taihō, Kitanoumi and his own recruits Kitanofuji and Chiyonofuji. After his retirement he left the Dewanoumi group of stables and founded Kokonoe stable in 1967. He died in 1977 while still an active stablemaster.

Masuiyama Daishirō was a sumo wrestler from Himeji, Hyōgo, Japan. His highest rank was ōzeki. After his retirement he was the head coach of Mihogaseki stable and produced yokozuna Kitanoumi among other wrestlers.

The following are the events in professional sumo during the year 2008.

The following are the events in professional sumo during 2009.

The following are the events in professional sumo during 2007.

The following are the events in professional sumo during 2003.

Ōzutsu Takeshi is a former sumo wrestler from Mie, Japan. Beginning his professional career in May 1971, he was ranked in the top makuuchi division continuously from March 1979 to January 1992, and his record of 1170 consecutive bouts there is the second best in history after Takamiyama. His highest rank was sekiwake. He was runner-up in one tournament and earned ten kinboshi or gold stars for defeating yokozuna. He also won four sanshō or special prizes. He wrestled for Taihō stable and after his retirement in May 1992 he worked there as a coach before leaving the Japan Sumo Association in 2008.

The following are the events in professional sumo during 1987.

The following were the events in professional sumo during 2015.

The following were the events in professional sumo during 2016.

The following are the events in professional sumo during 1992.