Klaas Runia (7 May 1926 in Oudeschoot – 14 October 2006 in Kampen) was a Dutch theologian, churchman and journalist. He studied at the Free University, Amsterdam and obtained his doctorate with a dissertation on the concept of theological time in Karl Barth in 1955. In 1956 he was appointed Professor of Systematic theology at the Reformed Theological College in Geelong, Australia, where he taught until his return to the Netherlands in 1971. During his time in Australia he exerted much influence on evangelical Christians, particularly at universities and theological schools. He was also elected chairman of the Reformed Ecumenical Council from 1968 to 1976. In 1971 he was appointed Professor of Practical Theology at the Kampen Theological University. During his professorship he was heavily engaged in church affairs and was regarded as a leader of the orthodox wing of the Dutch Reformed Church (Gereformeerde Kerken van Nederland), now the Protestant Church in the Netherlands. For many years he was also active as a journalist. He was editor-in-chief of Centraal Weekblad from 1972 to 1996. He also wrote many articles in the Frisian daily newspaper Friesch Dagblad . He retired in 1992, but remained active as a theologian and journalist until his death in 2006.

For a complete bibliography of all his writings see Bibliography of the Writings of Professor Klaas Runia 1926–2006, compiled, edited and introduced by David T Runia (2010).

For the text of some of his writings in English and his complete bibliography see . 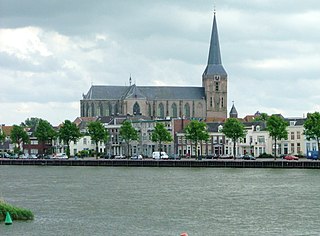 Karl Barth was a Swiss Reformed theologian who is most well known for his landmark commentary The Epistle to the Romans (1921), his involvement in the Confessing Church, and authorship of the Barmen Declaration, and especially his unfinished five-volume theological summa the Church Dogmatics. Barth's influence expanded well beyond the academic realm to mainstream culture, leading him to be featured on the cover of Time on 20 April 1962. 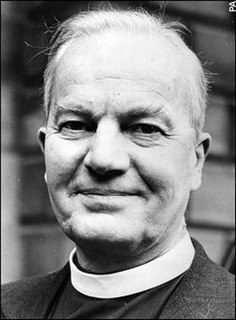 Thomas Forsyth Torrance, commonly referred to as T. F. Torrance, was a Scottish Protestant theologian and minister. Torrance served for 27 years as professor of Christian dogmatics at New College, in the University of Edinburgh. He is best known for his pioneering work in the study of science and theology, but he is equally respected for his work in systematic theology. While he wrote many books and articles advancing his own study of theology, he also edited the translation of several hundred theological writings into English from other languages, including the English translation of the thirteen-volume, six-million-word Church Dogmatics of Swiss theologian Karl Barth, as well as John Calvin's New Testament Commentaries. He was a member of the famed Torrance family of theologians.

Gerrit Cornelis Berkouwer (1903–1996) was for years the leading theologian of the Reformed Churches in the Netherlands (GKN). He occupied the chair in systematic theology of the Faculty of Theology, Free University (VU) in Amsterdam.

Herman Bavinck (1854–1921) was a Dutch Reformed theologian and churchman. He was a significant scholar in the Calvinist tradition, alongside Abraham Kuyper and B. B. Warfield.

Harry M. Kuitert was a significant theologian of the Reformed Churches in the Netherlands (GKN).

Heinrich Emil Brunner (1889–1966) was a Swiss Reformed theologian. Along with Karl Barth, he is commonly associated with neo-orthodoxy or the dialectical theology movement.

Theological University of the Reformed Churches is an academic theological seminary in the Dutch city of Kampen. It was founded in 1944, but its history goes back to 1854.

Herman Nicolaas Ridderbos was a Dutch theologian and biblical scholar. He was an important New Testament theologian, having worked extensively on the history of salvation (Heilsgeschichte) and biblical theology.

Klaas is a Dutch male given and surname. It is the Dutch short form of Nicholas, a Greek name ultimately meaning victory of the people. A traditionally common name in the Netherlands, its popularity declined some 20-fold since 1950. Archaic spellings include Claas and Claes. Among its female derivatives are Klaasje, Clasien, Clasina, Clasine, Clazien, Klasien, Klasina and Klaziena. Klaas also exists as a patronymic surname, though the forms Klaasen, Klaassen, Claassen, Claessen, and Claessens are more common.

Johan Herman Bavinck was a Dutch pastor, missionary and theologian.

David Theunis Runia is a Dutch-Australian classical scholar and educational administrator who has worked in both Australia and the Netherlands. 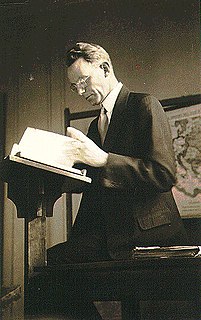 Cornelius Van Til was a Dutch-American Christian philosopher and Reformed theologian, who is credited as being the originator of modern presuppositional apologetics.

Wilhelm Pauck was born in Laasphe, in Westphalia, Germany [today, Bad Laasphe], January 31, 1901, and died in Palo Alto, California, September 3, 1981. A German-American church historian and historical theologian in the field of Reformation studies, Pauck's fifty-year teaching career reached from the University of Chicago and Union Theological Seminary, to Vanderbilt and Stanford universities. His impact was extended through frequent lectures and visiting appointments in the U.S. and Europe. Pauck served as a bridge between the historical-critical study of Protestant theology at the University of Berlin and U.S. universities, seminaries, and divinity schools. Combining high critical acumen with a keen sense of the drama of human history, in his prime Pauck was considered the Dean of historical theology in the United States. In the course of his career he became associated with Reinhold Niebuhr and Paul Tillich as friend, colleague, and confidant.

George Hunsinger is an American theologian who is Hazel Thompson McCord Professor of Systematic Theology at Princeton Theological Seminary. He served as director of the Seminary's Center for Karl Barth Studies from 1997 to 2001.

Kornelis Heiko Miskotte was a Dutch Protestant theologian and a representative of dialectical theology.

Jan Ridderbos was a minister in the Reformed Churches in the Netherlands and since 1912 professor of Old Testament at the Theological College in Kampen.