Knocklong was originally known as Druim Damhghaire, the Ridge of the Oxen, but takes its present title from Cnoc Luinge, the Hill of the Encampment. According to tradition, King Cormac mac Airt set up his camp on this hill when he invaded Munster during the third century. The King of Munster consulted a Druid, Mug Ruith, who used his magical powers to help the Munster men to defeat Cormac's forces in a legendary battle said to have taken place about 250 A.D. Four centuries later, about 650, a more significant fight took place here when Dioma, King of Thomond, stopped the Connaught men from recovering County Clare from North Munster. This historic battle secured Clare for the Dalcassians so Cnoc Luinge may derive its present name from an encampment of the seventh century rather than the third century. Cnoc Luinge has also been translated as the Hill of the Ships, as the tents on the hill resembled ships under sail. [3] Another version says that there was once a lake from Emly village in County Tipperary to the hill of Knocklong, on which small boats or ships used to sail. [4]

Although it is a small village, Knocklong played a role in modern Irish history. It is most famous for the rescue of Seán Hogan which took place at the railway station in Knocklong during the War of Independence on 13 May 1919. Hogan's colleagues from the Third Tipperary Brigade -- Seán Treacy, Dan Breen and Séumas Robinson—were joined by Ned Foley, JJ O'Brien, Ned O'Brien, Seán Lynch, and Jim Scanlon from the East Limerick Brigade, to organise Hogan's rescue. Hogan was being transported by train to Cork, and the men, led by Treacy, boarded the train in Knocklong. A close-range shoot-out followed on the train. Treacy and Breen were seriously wounded in the gun fight, two policemen (Sergeant Peter Wallace and Constable Enright) died, but Hogan was rescued. He was spirited away to Knocklong village, where his handcuffs were cleaved by Séan Lynch, one of the rescuers, in the local butcher's shop. That train station no longer exists. [5] The rescue at Knocklong is commemorated in the song "The Station of Knocklong", which was a popular ballad during the Irish War of Independence. Ned Foley was later arrested and executed for his part in the rescue along with Patrick Maher, a volunteer from Limerick, who had no involvement in the rescue at Knocklong.

Knocklong is steeped in tradition and the Gaelic Athletic Association (GAA) plays a major role in the community. The village has seen many of its residents over the years succeed in winning titles with both their club Garryspillane, "The Bouncers", and with their colleges and county team Limerick. In 2005, the club won their first ever Senior Hurling Title and later went on to win the All-Ireland Kilmacud Crokes mini-7s tournament.[ citation needed ].

Mug Ruith is a figure in Irish mythology, a powerful blind druid of Munster who lived on Valentia Island, County Kerry. He could grow to enormous size, and his breath caused storms and turned men to stone. He wore a hornless bull-hide and a bird mask, and flew in a machine called the roth rámach, the "oared wheel". He had an ox-driven chariot in which night was as bright as day, a star-speckled black shield with a silver rim, and a stone which could turn into a poisonous eel when thrown in water.

Daniel Breen was a volunteer in the Irish Republican Army during the Irish War of Independence and the Irish Civil War. In later years he was a Fianna Fáil politician.

Seán Allis Treacy was one of the leaders of the Third Tipperary Brigade of the Irish Republican Army during the Irish War of Independence. It was his actions that initiated the conflict in 1919. He was killed in October 1920, on Talbot Street in Dublin, in a shootout with British troops and spies during an aborted British Secret Service surveillance operation.

Sologhead beg or Solohead beg is a townland and civil parish in County Tipperary, Ireland, lying northwest of Tipperary town. 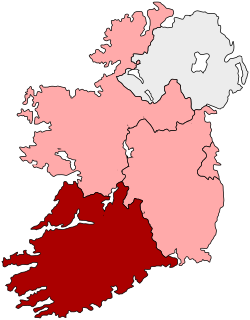 The Munster Hurling Intermediate Championship is an annual hurling competition organised by the Gaelic Athletic Association since 1961 for the strong hurling teams in the province of Munster in Ireland. In some cases the teams consist of players who are not on the senior squads for their county, or in others of players who are from junior or intermediate clubs. The competition was established to prevent the stronger counties from dominating the Munster Junior Hurling Championship.

Liam Sheedy is an Irish hurling manager and former player who is currently manager of the Tipperary senior hurling team.

Edmond Foley, sometimes known as Edmund or Edward, was a member of the Irish Republican Army (IRA) who was hanged in Mountjoy Prison on 7 June 1921. Together with nine other men executed by hanging during the War of Independence, he was one of The Forgotten Ten.

The 3rd Tipperary Brigade was one of the most active of approximately 80 such units that constituted the Irish Republican Army during the Irish War of Independence. The Brigade was based in southern Tipperary and conducted its activities mainly in mid-Munster. 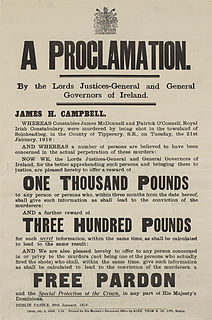 The Soloheadbeg ambush took place on 21 January 1919, when members of the Irish Volunteers ambushed Royal Irish Constabulary (RIC) officers who were escorting a consignment of gelignite explosives at Soloheadbeg, County Tipperary. Two RIC officers were killed and their weapons and the explosives were seized. The Volunteers acted on their own initiative and had not sought authorisation for their action. As it happened on the same day that the revolutionary Irish parliament first met and declared Ireland's independence, it is often seen as the first engagement of the Irish War of Independence. 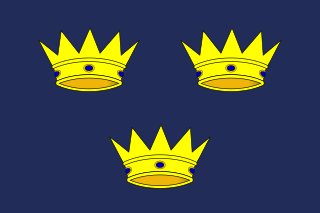 The 2013 McGrath Cup was a Gaelic football competition played by the teams of Munster GAA. The competition differs from the Munster Senior Football Championship as it also features further education colleges and the winning team does not progress to another tournament at All-Ireland level. The competition was won by Kerry, defeating Tipperary in the final by seven points.

On 13 May 1919, a captured Irish Republican Army (IRA) member, Seán Hogan, was rescued from a train by his comrades while being guarded by four armed Royal Irish Constabulary (RIC) officers. Two of the RIC officers were killed and several IRA volunteers were wounded. The rescue took place on Hogan's 18th birthday, while the Cork-bound train stopped at Knocklong station in County Limerick. It was undertaken by three of Hogan's comrades from the 3rd Tipperary Brigade of the IRA and five members of the Galtee Battalion of the East Limerick Brigade. Hogan was one of the most wanted men in Ireland at the time of his rescue, due to his role in the Soloheadbeg ambush and would almost certainly have been executed.