It was discovered by the British National Antarctic Expedition (1901–04) which named it for Dr. Reginald Koettlitz, physician and botanist of the expedition. [1] 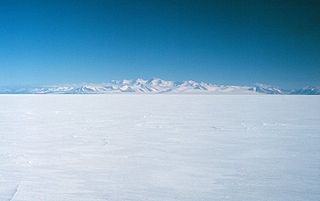 The Royal Society Range is a mountain range in Victoria Land, Antarctica. With its summit at 4,025 metres (13,205 ft), the massive Mount Lister forms the highest point in this range. Mount Lister is located along the western shore of McMurdo Sound between the Koettlitz, Skelton and Ferrar glaciers. Other notable local terrain features include Allison Glacier, which descends from the west slopes of the Royal Society Range into Skelton Glacier.

Fisher Glacier is a prominent western tributary to the Lambert Glacier, about 100 nautical miles long, flowing east past the north sides of Mount Menzies and Mount Rubin and joining the main stream of the Lambert Glacier just east of Mount Stinear. It was sighted from Australian National Antarctic Research Expeditions aircraft by K.B. Mather in 1957, and was named by the Antarctic Names Committee of Australia for N.H. Fisher, chief geologist at the Bureau of Mineral Resources, Department of National Development, Australia.

Heald Island is an island, 3 miles (5 km) long and 555 metres (1,820 ft) high, which projects through the ice of Koettlitz Glacier just east of Walcott Bay, in Victoria Land, Antarctica. It was discovered and named by the British National Antarctic Expedition (1901–04) for Seaman William L. Heald, a member of the expedition who saved the life of Hartley T. Ferrar when the latter was suffering from scurvy in 1902. 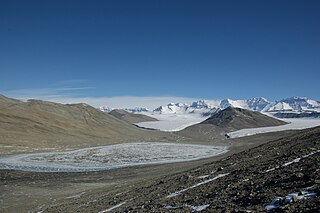 Miers Valley is a valley in the McMurdo Dry Valleys located just south of Marshall Valley and west of Koettlitz Glacier, on the coast of Victoria Land, Antarctica. The valley is ice-free in the Austral summer except for Miers Glacier and Adams Glacier in its upper (western) part, and Lake Miers near its center. Penance Pass connects it to the valley of Shangri-la.

Deception Plateau is a high, ice-covered plateau, 11 miles (18 km) long and 6 miles (10 km) wide, which is bounded by Aviator Glacier, Pilot Glacier and Mount Overlord, in Victoria Land. It was so named by the southern party of the New Zealand Geological Survey Antarctic Expedition, 1966–67, because of its deceptively small appearance when viewed from a distance.

Gildea Glacier is a glacier 10 kilometres (6 mi) long and 5 kilometres (3 mi) wide flowing southwestward from Craddock Massif between Mount Slaughter and Mount Atkinson into Nimitz Glacier, in the Sentinel Range of the Ellsworth Mountains, Antarctica. The upper portion of the glacier also receives ice from Hammer Col and southern Vinson Massif.

Armitage Saddle is the saddle at the head of Blue Glacier, overlooking the Howchin and Walcott Glaciers which drain toward Walcott Bay in the Koettlitz Glacier. The saddle is at the south end of the "Snow Valley" that was mapped by Armitage in 1902, and subsequently wrongly omitted from maps of the British Antarctic Expedition, 1910–13. The New Zealand Blue Glacier Party of the Commonwealth Trans-Antarctic Expedition, 1956–58, established a survey station on the saddle in September 1957. They named it for Lieutenant Albert Armitage, second-in-command of the British National Antarctic Expedition, 1901–04, in recognition of his exploration in this area.

Koettlitz Névé is a roughly circular névé about 7 nautical miles (13 km) wide at the head of Koettlitz Glacier, Victoria Land, Antarctica. The névé is bounded to the west and south by Mount Talmadge, Mount Rees and Mount Cocks, and to the east by Mount Morning. It was named by the Advisory Committee on Antarctic Names in 1994 in association with Koettlitz Glacier.

Discovery Glacier is a broad glacier, 9 nautical miles (17 km) long, between Hurricane Ridge and Mount Discovery on the Scott Coast, Victoria Land. The glacier flows north to coalesce with the eastern margin of lower Koettlitz Glacier. It was named by the Advisory Committee on Antarctic Names (1999) in association with Mount Discovery, which Captain Robert Falcon Scott had named after the expedition ship of the British National Antarctic Expedition, 1901–04.

Lake Discovery is a lake, 3 nautical miles (6 km) long, situated at the north end of Hurricane Ridge on the west margin of Discovery Glacier, Scott Coast, Victoria Land. It was named by the Advisory Committee on Antarctic Names (1999) in association with Discovery Glacier, a partial source for the lake, and Mount Discovery, the dominant feature in the vicinity.

Guerrero Glacier is a glacier about 7 nautical miles (13 km) long in Doyran Heights, draining from the southeast slopes of Mount Havener southwest of Beloslav Peak to the south side of Taylor Spur, in the southeast part of the Sentinel Range, Ellsworth Mountains, Antarctica. It was first mapped by the United States Geological Survey from surveys and U.S. Navy air photos, 1957–59, and was named by the Advisory Committee on Antarctic Names for John F. Guerrero, a meteorologist at South Pole Station in 1957.

The Pyramid is a small but distinctive peak of Omak just south of Pyramid Trough, at the west side of the Koettlitz Glacier. The descriptive name appears to have been first used by the British Antarctic Expedition of 1910–1913.

Glimpse Glacier is an alpine glacier composed of two segments, separated by an icefall, which flow northeast from the névé

Hahn Island is an island 1 nautical mile (2 km) long, lying 7 nautical miles (13 km) north of Mount Discovery, on the east side of Koettlitz Glacier, in Antarctica. It was mapped by the United States Geological Survey from ground surveys and Navy air photos, and was named by the Advisory Committee on Antarctic Names in 1963 for Commander James Hahn, U.S. Navy, a public information officer on the staff of the Commander, U.S. Naval Support Force, Antarctica, for several years preceding 1963.

Marshall Ridge is a ridge to the east of Blue Glacier on the Scott Coast of Victoria Land, Antarctica, running east–west and rising to about 1,175 metres (3,850 ft) between Garwood Valley and Marshall Valley. The feature was almost surely observed in 1903 by the Koettlitz Glacier party led by Lieutenant A.B. Armitage of the British National Antarctic Expedition, but it was first clearly mapped by Captain Robert F. Scott's second expedition, the British Antarctic Expedition, 1910–13. The ridge was named in association with Marshall Valley by the New Zealand Antarctic Place-Names Committee in 1982.

Marshall Stream is a meltwater stream in Victoria Land, Antarctica. It is about 6 nautical miles (11 km) long and flows through the Marshall Valley from the Rivard Glacier to the Koettlitz Glacier. The stream was observed by Troy L. Pewe, a glacial geologist with U.S. Navy Operation Deep Freeze, 1957–58, and the name was applied by the New Zealand Antarctic Place-Names Committee and the Advisory Committee on Antarctic Names in consultation, and derives from its location in Marshall Valley. 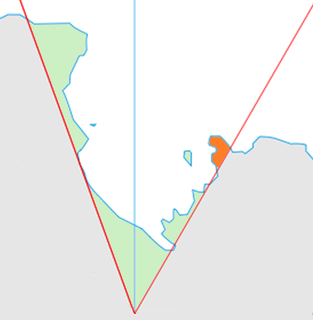 Leap Year Glacier is a tributary glacier between Molar Massif and Mount Stirling in the Bowers Mountains of Antarctica, draining southeast into Black Glacier. It was so named by the northern party of the New Zealand Geological Survey Antarctic Expedition, 1963–64, as party members arrived here in the new leap year of 1964 after climbing out of the Sledgers Glacier.

Hidden Valley is the ice-free valley next south of Miers Valley through which an alpine glacier formerly moved to coalesce with Koettlitz Glacier. The mouth of the valley is completely blocked by the Koettlitz moraine, the only one of the numerous valleys tributary to the Koettlitz isolated in this fashion. The main valley is hidden not only from the coast but from most of the surrounding ridges. The valley was traversed during December and January by the New Zealand Victoria University of Wellington Antarctic Expedition (VUWAE) 1960-61 who applied the name.