Kojonup is a town 256 km south-east of Perth, Western Australia along Albany Highway in the Great Southern region. The name Kojonup is believed to refer to the "Kodja" or stone axe made by Indigenous Australians, from the local stone.

The first European in the area was surveyor Alfred Hillman who arrived in 1837 and had been guided to freshwater spring by the Noongar people. The site was an important staging place on the road to Albany, and in 1837 a military post was established there for the protection of travellers and the mail. [2] By 1845 this outpost had grown to support a military barracks, built on the site of the freshwater spring. Today, the barracks still stands on its original site and houses the Kojonup Pioneer Museum. The barracks is one of the oldest buildings in Western Australia. The first farms in Kojonup were set up by soldiers with settlement grants. The appointment in 1865 of a mounted Police Constable marked the phasing out of the military presence at Kojonup. By the late 1860s the military had left and the Barracks became a focus for community gatherings, much as it is today. The town's first Police Station was built in 1869 and the first hotel licence was granted in 1868. [3]

Kojonup has been the home to many important Australian Rules Football players, [7] including several players of Indigenous Australian descent.

The early economy of the town was initially dependent on cutting and transporting sandalwood and kangaroo hunting [8] but by the mid-19th century the wool industry began to boom and by 1906 the shire had 10,500 sheep. By 1989 the shire had seen over 1 million sheep being shorn.

To celebrate the importance of the wool industry the town built a one and a half scale model of a wool wagon; the project was officially opened on Australia Day in 2001. [9]

The surrounding areas produce wheat and other cereal crops including organic, conventional and GMO. [10]

The Kojonup region has hosted some of Australia's earliest biodynamic and organic agriculture endeavours. [11] The Marsh v Baxter case has put Kojonup at the epicentre of the battle in Australia of organic versus GMO agriculture. [10] The town is a receival site for Cooperative Bulk Handling. [12]

Notable current and past residents

Katanning is a town located 277 kilometres (172 mi) south-east of Perth, Western Australia on the Great Southern Highway. At the 2016 census, Katanning had a population of 3,687. 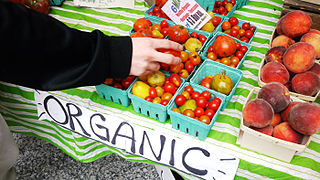 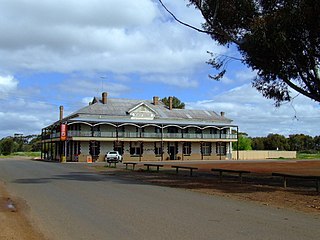 Dumbleyung is a town and shire in the Wheatbelt region of Western Australia, 267 kilometres (166 mi) south-east of Perth between Wagin and Lake Grace on State Route 107.

Wagin is a town and shire in the Great Southern region of Western Australia, approximately 225 km (139.81 mi) south-east of Perth on the Great Southern Highway between Narrogin and Katanning. It is also on State Route 107. The main industries are wheat and sheep farming. 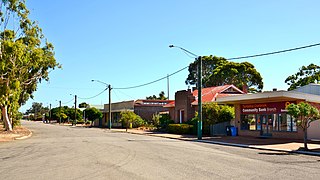 Cranbrook is a small town in the Shire of Cranbrook in the Great Southern region of Western Australia between Katanning, Kojonup and Mount Barker, situated 320 km south of Perth. It is billed as "The Gateway to the Stirlings", referring to the nearby Stirling Range National Park. At the 2006 census, Cranbrook had a population of 280. 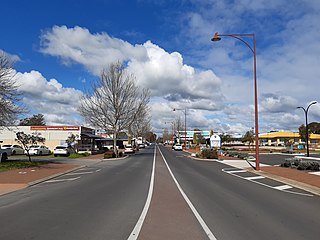 Babakin is a small town located in the Wheatbelt region of Western Australia between the towns of Bruce Rock and Corrigin. At the 2016 census the population of Babakin was approximately 54. Facilities in the town include a school, shop, hall and sporting facilities. 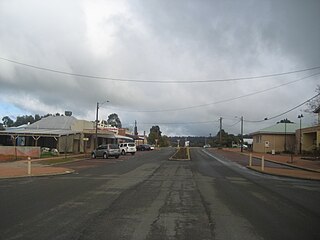 Ongerup is a town 410 kilometres (250 mi) south-east of Perth and 54 kilometres (34 mi) east of Gnowangerup in the Great Southern region of Western Australia. At the 2016 census Ongerup had a population of 93.

Yornaning is a small town located in the Wheatbelt region of Western Australia, on Great Southern Highway, between Pingelly and Narrogin.

The Shire of Kojonup is a local government area in the Great Southern region of Western Australia, about 250 kilometres (155 mi) southeast of the state capital, Perth, along Albany Highway. The Shire covers an area of 2,932 square kilometres (1,132 sq mi) and its seat of government is the town of Kojonup.

The Newcastle Gaol Museum is a prison museum on Clinton Street in Toodyay, Western Australia, founded in 1962. The museum records the history of the serial escapee Moondyne Joe and his imprisonment in the "native cell".

Yued is an region inhabited by one of the fourteen groups of Noongar Aboriginal Australians who have lived in the South West corner of Western Australia for approximately 40,000 years. Aboriginals in the Yued region share many similarities with the Noongar culture and the Yued language is a dialect of the main Noongar language.