The koku in Japan was typically used as a dry measure. The amount of rice production measured in koku was the metric by which the magnitude of a feudal domain ( han ) was evaluated. [4] A feudal lord was only considered daimyō class when his domain amounted to at least 10,000 koku. [4] As a rule of thumb, one koku was considered a sufficient quantity of rice to feed one person for one year. [5] [lower-alpha 2] [lower-alpha 3]

Origin of the modern unit

The kyō-masu ( 京枡 , "Kyoto masu "), the semi-official one shō measuring box since the late 16th century under Nobunaga, [17] began to be made in a different (larger) size in the early Edo period, sometime during the 1620s. [18] Its dimensions, given in the traditional Japanese shaku length unit system, were 4 sun 9 bu square times 2 sun 7 bu depth. [lower-alpha 6] [18] [13] Its volume, which could be calculated by multiplication was: [11]

Although this was referred to as shin kyō-masu or the "new" measuring cup in its early days, [18] its use supplanted the old measure in most areas in Japan, until the only place still left using the old cup ("edo-masu") was the city of Edo, [19] and the Edo government passed an edict declaring the kyō-masu the official nationwide measure standard [17] in 1669 (Kanbun 9). [19]

The modern shaku defined here is set to equal the so-called setchū-shaku (setchū-jaku or "compromise shaku"), [22] measuring 302.97 mm, a middle-ground value between two different kane-jaku standards. [lower-alpha 8] [23] [22] A researcher has pointed out that the (shin) kyō-masu  [ ja ] cups ought to have used take-jaku which were 0.2% longer. [12] [lower-alpha 9] However, the actual measuring cups in use did not quite attain the take shaku metric, and when the Japanese Ministry of Finance had collected actual samples of masu from the masu-za  [ ja ] (measuring-cup guilds) of both eastern and western Japan, they found that the measurements were close to the average of take-jaku and kane-jaku. [28]

The "lumber koku" or "maritime koku" is defined as equal to 10 cubic shaku in the lumber or shipping industry, [29] compared with the standard koku measures 6.48 cubic shaku. [6] A lumber koku is conventionally accepted as equivalent to 120 board feet, but in practice may convert to less. [30] In metric measures 1 lumber koku is about 278.3 litres (61.2 imp gal; 73.5 US gal).

The exact measure now in use was devised around the 1620s, but not officially adopted for all of Japan until the Kanbun era (1660s).

The production yield (kokudaka) was reported in terms of brown rice (genmai) in most places, with the exception of Satsuma clan which reported in terms of unhusked or non-winnowed rice (momi ( 籾 )). [33] Since this practice had persisted, past Japanese rice production statistics need to be adjusted for comparison with other countries that report production by milled or polished rice. [6]

Even in certain parts of the Tōhoku region or Ezo (Hokkaidō) where rice could not be grown, the economy was still measured in terms of koku, with other crops and produce converted to their equivalent value in terms of rice. [34] The kokudaka was not adjusted from year to year, and thus some fiefs had larger economies than their nominal koku indicated due to land reclamation and new rice field development, which allowed them to fund development projects.

As measure of cargo ship class

The Hyakumangoku Matsuri (Million-Koku Festival) in Kanazawa, Japan celebrates the arrival of daimyō Maeda Toshiie into the city in 1583, although Maeda's income was not raised to over a million koku until after the Battle of Sekigahara in 1600.

Emperor Nakamikado was the 114th Emperor of Japan, according to the traditional order of succession. Nakamikado's birth name was Yoshihito before he became enthroned as Emperor in 1709, a reign that would last until 1735 with his abdication and retirement. As Emperor, Nakamikado had an increasingly warmed relationship with the shogunate in part due to his father's efforts. Relations warmed up to the point of family marriage talks but these fell through due to the sudden death of the potential Shōgun groom. Events that surrounded the Emperor included at least 2 major earthquakes, the largest Ryukyuan diplomatic mission of the Edo period, the Kyōhō Reforms, and the Kyōhō famine. It is unclear what role if any the Emperor had in these concurrent events as the role of "Emperor" was a figurehead at the time. Nakamikado's family included at least 14 children mothered by his wife, and 5 concubines. Nakamikado abdicated the throne in 1735 in favor of his first son, and died two years later.

Magatama are curved, comma-shaped beads that appeared in prehistoric Japan from the Final Jōmon period through the Kofun period, approximately 1000 BCE to the 6th century CE. The beads, also described as "jewels", were made of primitive stone and earthen materials in the early period, but by the end of the Kofun period were made almost exclusively of jade. Magatama originally served as decorative jewelry, but by the end of the Kofun period functioned as ceremonial and religious objects. Archaeological evidence suggests that magatama were produced in specific areas of Japan and were widely dispersed throughout the Japanese archipelago via trade routes.

Shaku or Japanese foot is a Japanese unit of length derived from the Chinese chi, originally based upon the distance measured by a human hand from the tip of the thumb to the tip of the forefinger. Traditionally, the length varied by location or use, but it is now standardized as 10/33 m, or approximately 30.3 centimeters (11.9 in). 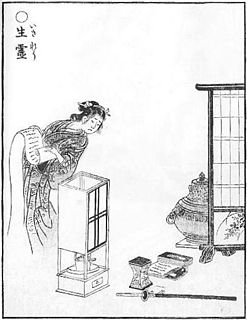 Ikiryō, also known as shōryō (しょうりょう), seirei (せいれい), or ikisudama (いきすだま), is a disembodied spirit in Japanese popular belief and fiction that leaves the body of a living person and subsequently haunts other people or places, sometimes across great distances. The term(s) are used in contrast to shiryō, which refers to the spirit of those who are already deceased.

Traditional Japanese units of measurement or the shakkanhō is the traditional system of measurement used by the people of the Japanese archipelago. It is largely based on the Chinese system, which spread to Japan and the rest of the Sinosphere in antiquity. It has remained mostly unaltered since the adoption of the measures of the Tang dynasty in 701. Following the 1868 Meiji Restoration, Imperial Japan adopted the metric system and defined the traditional units in metric terms on the basis of a prototype metre and kilogram. The present values of most Korean and Taiwanese units of measurement derive from these values as well. 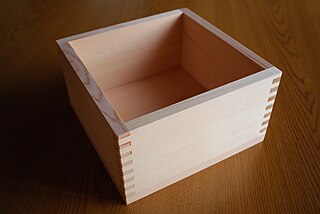 A masu was originally a square wooden box used to measure rice in Japan during the feudal period. In 1885 Japan signed the Convention du Mètre and in 1886 converted all of its traditional measures to the metric system.

The komusō were a group of Japanese mendicant monks of the Fuke school of Zen Buddhism who flourished during the Edo period of 1600–1868. Komusō were characterized by a straw basket worn on the head, manifesting the absence of specific ego but also used for being able to travel incognito. They were also known for playing solo pieces on the shakuhachi. These pieces, called honkyoku, were played during a meditative practice called suizen, for alms, as a method of attaining enlightenment, and as a healing modality. The Japanese government introduced reforms after the Edo period, abolishing the Fuke sect. Records of the musical repertoire survived, and are being revived in the 21st century.

Matsumoto Domain was a feudal domain under the Tokugawa shogunate of Edo period Japan. It is located in Shinano Province, Honshū. The domain was centered at Matsumoto Castle, located in what is the city of Matsumoto in Nagano Prefecture.

Viscount Niwa Nagakuni was an Edo period Japanese samurai, and the 10th daimyō of Nihonmatsu Domain in the Tōhoku region of Japan. He was the 11th hereditary chieftain of the Niwa clan. His courtesy title was Saikyō-no-daifu, and his Court rank was Junior Fourth Rank, Lower Grade.

Sakai Tadakatsu was a Sengoku period Japanese samurai, and early Edo period daimyō and served in several important positions within the administration of the Tokugawa shogunate.

Nihonmatsu Domain was a feudal domain under the Tokugawa shogunate of Edo period Japan, located in southern Mutsu Province. It was centered on Nihonmatsu Castle in what is now the city of Nihonmatsu, Fukushima, and its territory included all of Nihonmatsu, Motomiya, Ōtama and most of the present-day city of Kōriyama. For most of its history it was ruled by the Niwa clan. The Nihonmatsu Domain was also the scene of a major battle of the Boshin War of the Meiji Restoration. 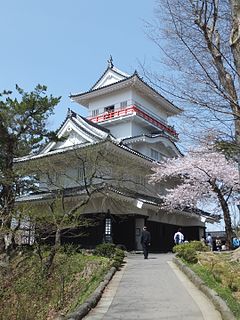 Kubota Domain was a feudal domain in Edo period Japan, located in Dewa Province, Japan. It was centered on Kubota Castle in what is now the city of Akita and was thus also known as the Akita Domain. It was governed for the whole of its history by the Satake clan. During its rule over Kubota, the Satake clan was ranked as a Province-holding daimyō family, and as such, had the privilege of shogunal audiences in the Great Hall (Ohiroma) of Edo Castle.

Morioka Domain was a tozama feudal domain of Edo period Japan. It was ruled throughout its history by the Nanbu clan. It was called Nanbu Domain during the early part of its history. It was located in northern Mutsu Province, Honshū, covering the eastern half of what is now Aomori Prefecture and the northern two-thirds of what is now Iwate Prefecture and the Kazuno District of what is now Akita Prefecture. The domain was centered at Morioka Castle in the city of Morioka. For most of its history, Morioka Domain had an official kokudaka of 100,000 koku, although its actual revenues were much higher. Towards the end of the Edo period, the domain’s status was raised to 200,000 koku.

Yokosuka Domain was a feudal domain under the Tokugawa shogunate of Edo period Japan, located in Tōtōmi Province. It was centered at Yokosuka Castle in what is now the Matsuo district of the city of Kakegawa in Shizuoka Prefecture.

Honda Masazumi was a Japanese samurai of the Azuchi–Momoyama period through early Edo period, who served the Tokugawa clan. He later became a daimyō, and one of the first rōjū of the Tokugawa shogunate.

Mount Nokogiri literally "saw mountain" is a low mountain on the Bōsō Peninsula on Honshu, Japan. It lies on the southern border of the city of Futtsu and the town Kyonan in Awa District in Chiba Prefecture.

Fires in Edo (江戸), the former name of Tokyo, during the Edo period (1600−1868) of Japan were so frequent that the city of Edo was characterized as the saying "Fires and quarrels are the flowers of Edo" goes. Even in the modern days, the old Edo was still remembered as the "City of Fires" (火災都市). 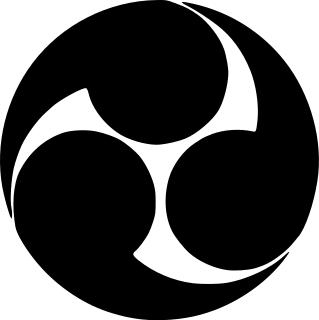 The Second Shō dynasty was the last dynasty of the Ryukyu Kingdom from 1469 to 1879, ruled by the Second Shō family under the title of King of Chūzan. This family took the family name from the earlier rulers of the kingdom, the first Shō family, even though the new royal family has no blood relation to the previous one. Until the abolition of Japanese peerage in 1947, the head of the family was given the rank of marquess while several cadet branches held the title of baron.