Last updated March 27, 2021
Not to be confused with Pravda or Komsomolskaya Pravda in Ukraine.

During the Soviet era, Komsomolskaya Pravda was an all-union newspaper of the Soviet Union and an official organ of the Central Committee of the Komsomol. Established in accordance with a decision of the 13th Congress of the Russian Communist Party (b), it first appeared on 24 May 1925 [2] in an edition of 31,000 copies.

Komsomolskaya Pravda began as the official organ of the Komsomol, the youth wing of the Communist Party of the Soviet Union. As such, it targeted the same 14 to 28 demographic as its parent organization, focusing initially on popular science and adventure articles while teaching the values of the CPSU. During this period, it was twice awarded the Order of Red Banner of Labour (in 1950 and 1957), and was also the recipient of the Order of Lenin (in 1930), of the Order of the October Revolution (in 1975), and of the Order of the Patriotic War (in 1945).[ citation needed ]

The paper is owned by Media Partner, which in turn is owned by ESN Group (Евросевернефть), an energy company led by Grigory Berezkin, who has close links to Gazprom. In December 2000 the Norwegian media company A-Pressen bought 25 percent plus one share of the paper. [3] It is published in tabloid format by "Izdatelsky Dom Komsomolskaya Pravda" (Komsomolskaya Pravda Publishing House). [4]

Komsomolskaya Pravda reached its highest circulation in 1990 when it sold almost 22 million daily copies. [5] In 2001 it was the ninth-top European newspaper with a circulation of 785,000 copies. [4] It was the top-selling newspaper in Russia in 2006 with daily circulation ranging from 700,000 to 3.1 million copies. [1] Its March 2008 circulation, certified by the NCS, was 660,000 copies [6] and it was the most read paper in the country based on the findings by the TNS Gallup Media. [7] In the same year the online version of the paper was also the most visited news website. [7]

In January 2015 a front-page article in Komsomolskaya Pravda suggested that the United States had orchestrated the Charlie Hebdo shooting. [8]

In May 2017, columnist Alisa Titko went viral for writing that the English city of Manchester was "full of fat people" and that she found the sight of same-sex love "disgusting". [9] [10] [11]

Editors in chief of Komsomolskaya Pravda

The newspaper's editors in chief, in reverse chronological order, have been:

A "European" edition (Komsomolskaya Pravda v Evrope), aimed in particular at the Russian diaspora in Germany, as well as Russian-speaking tourists on the Croatian Adriatic coast, is distributed in several EU countries, while a special Baltic-region edition is also available in Latvia, Estonia, and Finland. [16]

A number of similar, but independently owned, newspapers can be found in other member or associate-member states of the Commonwealth of Independent States (CIS): 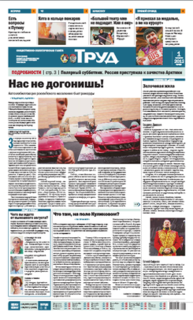 Trud is a Russian newspaper.

Rossiyskaya Gazeta is a Russian newspaper published by the Government of Russia. The daily newspaper serves as the official government gazette of the Government of the Russian Federation, publishing government-related affairs such as official decrees, statements and documents of state bodies, the promulgation of newly approved laws, Presidential decrees, and government announcements. First issued on 11 November 1990, Rossiyskaya Gazeta has a circulation of 185,445 as of 2010, making it one of the largest Russian and Russian language newspapers.

Iosif Pavlovich Utkin was a Russian poet of the World War II generation.

Pravda is a Russian broadsheet newspaper, formerly the official newspaper of the Communist Party of the Soviet Union.

Sovetsky Sport is a Russian national daily sports newspaper. Between 1924 and 1946 the newspaper was called Red Sports, it was not printed between 1928 and 1932.

Sovetskaya Latviya was a major Russian-language newspaper in the Latvian SSR.

KP in Ukraine is a Ukrainian newspaper published six times a week in Kyiv, the nation's capital. It is a Russian language newspaper with some regional editions in the Ukrainian language. 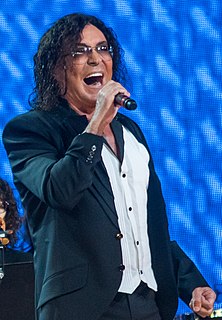 Valery Yakovlevich Leontiev is a Soviet and Russian pop singer, sometimes songwriter and actor whose popularity peaked in the early 1980s. He was titled a People's Artist of Russia in 1996. He is known as one of the most prominent artists of Soviet and Russian music. Over the course of his decades-long career, he has recorded more than 30 albums, many of which sold millions of copies. The media refers to Leontiev as a megastar and a legend of the Russian stage.

UMH group is an international multimedia group. It controls the portfolio of over 50 brands with leading positions in Internet, radio and press markets covering news, politics, business, sports, fashion, celebrity and TV niches. The portfolio includes over a dozen own and license media brands, main of them being Forbes Ukraine and Vogue Ukraine. 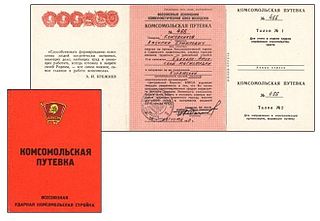 The Komsomol direction or Komsomol travel ticket was a document of mobilization in the Soviet Union issued by a Komsomol committee to a Komsomol member which directed the member for temporary or permanent shock construction projects or military service. Usually the Komsomol direction was associated with relocation to new, poorly settled remote locations: new construction sites, army service, etc. The travel ticket appeared sometime after adaptation of the Soviet Labor Code as a type of organizational mobilization. Decommunization in Ukraine started after the collapse of the Soviet Union. It was formalized in April 2015, when the Ukrainian government approved laws that outlawed communist symbols. 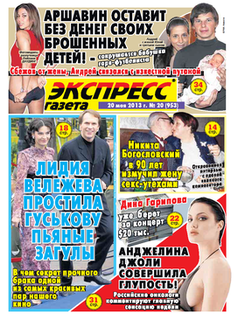 Express Gazeta is a Russian weekly tabloid newspaper specializing in the coverage of celebrity and private life of celebrities in Russia and abroad.

Monastyrskyi Island is an island within the boundaries of the Sobornyi district of the Ukrainian city of Dnipro near the right bank of the Dnipro river.

Vsevolod Vladimirovich Kukushkin is a Russian journalist, writer and ice hockey administrator. He has written for Komsomolskaya Pravda, TASS, RIA Novosti and Sport Express. He traveled with the Soviet Union national ice hockey team as both a journalist and translator, and reported on ice hockey at the Olympic Games, the Ice Hockey World Championships and Canada Cup tournaments. His other work includes published books and television screenplays. As an ice hockey administrator he sat on International Ice Hockey Federation (IIHF) committees, and acted as a press secretary for the Russian Superleague and its successor the Kontinental Hockey League. He received the Paul Loicq Award in 2000 from the IIHF for contributions to international ice hockey.