Konduwattuwana Wewa (Sinhalese: කොණ්ඩුවටුවාන ජලාශය) or Kondawattuwana Wewa is an ancient reservoir located in Ampara, Sri Lanka. The reservoir lies on the Ampara – Inginiyagala main road, approximately 4 km (2.5 mi) away from the town of Ampara. The site with ancient Buddhist ruins which belonging to the Konduwattuwana reservoir area is a formally recognised an archaeological site in Sri Lanka.

The reservoir is believed to be built during 1st-3rd century BC and had been renovated time to time to facilitate irrigation and drinking water to the nearby area. According to a stone pillar inscription found near the reservoir, the irrigation water of this reservoir was taxed, along with the paddy fields during the reign of King Dappula IV (939 - 940). [1] Further it reveals that unlawful tapping of irrigation water had also been prohibited by the edict. [2] 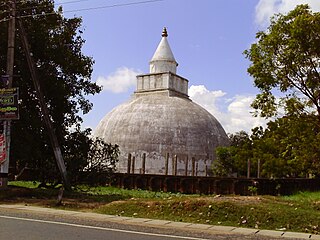 Rassagala, commonly Rajagala or Rajagalathenna, is a rugged and heavily forested mountain situated 1,038 feet (316 m) above sea level, in a sparsely populated part of Eastern Province, Sri Lanka which has an important archaeological value. The Rajagala archaeological site is only second to the Mihintale monastery in Anuradhapura and it spreads over 1,600 acres. It consists more than 600 prehistoric ruins, monuments and artifacts, and nearly 100 of them are ancient stupas.

Ovagiriya is one of archaeological sites in Polwatta, Ampara District, Sri Lanka. It is situated on Ampara-Inginiyagala road, about 19 km (12 mi) away from Ampara town. 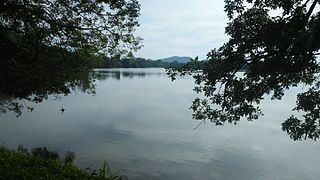 Piyangala Aranya Senasanaya or Piyangala Forest Hermitage is an ancient Buddhist temple in Ampara, Sri Lanka. The temple lies on the Ampara – Mahaoya main road, approximately 27 km (17 mi) away from the town of Ampara. The temple has been formally recognised by the Government as an archaeological site in Sri Lanka. 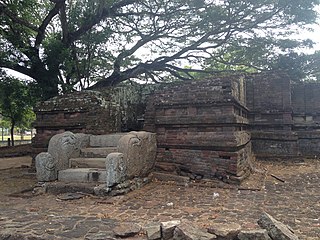 Panduwasnuwara is an ancient capital, situated in Kurunegala District, Sri Lanka. It is said to be the controlling centre known as Parakramapura of Dakkhinadesa in the 12th century, when it was ruled by Parakramabahu. The remaining ruins of the ancient kingdom still can be seen at Kotampitiya area which lies along Wariyapola-Chilaw main road about 19 km (12 mi) away from Wariyapola town.

Neelagiriseya is an ancient colossal Stupa situated in Lahugala, Ampara District, Sri Lanka. It is the largest Buddhist Stupa in the Eastern Province of the country. It has a circumference of 182 m (597 ft) and 22 m (72 ft) height in the current status. In the recent history the Stupa and its monastery site had been neglected and abandoned over three decades as the rise of activities of military organization LTTE in the area.