Kongsdal, previously, Tygestrup, is a manor house and estate located approximately 14 kilometres (8.7 mi) southwest of Holbaek, between Undløse and Mørkøv, Holbæk Municipality, some 60 km west of Copenhagen, Denmark. The three-winged main building from the 1590s is listed.

Bishop Absalon, a prominent member of the influential Hvide family, in 1180 presented his land in Undløse Parish to Sorø Abbey. The abbey constructed a home farm (ladegård) at the site which was known as Undløse. It was later expanded with more tenant farms until it comprised most of the parish and much of the surrounding villages.

In 1205, Sorø Abbey ceded Undløse to the family Hvide family in exchange for Pedersborg and the estate was later renamed Tygestrup. The family would, with one short interruption, keep the estate for the next 150 years. In the late 13th century, it was owned by the infamous Marsk Stig Andersen, who was convicted for the murder of Erik Klipping in 1286. All his holdings were confiscated but a settlement in 1309 returned Tygestrup to his son Anders Stigsøn. This son, Stig Andersen, was later part of am unsuccessful rebellion against Valdemar IB and was in 1361 forced to cede Tygestrup to Antvorskov Abbey to be forgiven for his sins.

After the Reformation, in 1536, Tygestrup was confiscated by the Crown and initially operated as a royal fief.

In 1587, Frederick II granted Tygestrup to Peder Reedtz. He had come to Denmark at the outbreak of the Northern Seven Years' War where he had won the favour of the king. He had for a while served as avener and later been granted a number of fiefs on Zealand9. Peder Reedtz increased the size of the estate through a number of barters with the king. On his death in 1667, it passed to his son Frederik Reedtz. He was, artly as a result of his two marriages, also able to expand the estate. He was also lensmann9 of Vordingborg Castle and a member of the Privy Council. His son, Peder Reedtz, who inherited the estate in 1659, spent most of his time at the royal court in Copenhagen and was in 1667 appointed as Chancellor to Frederick III. Tygestrup was by then a very large estate with 104 tønder hartkorn of land directly under the manor and an additional 800 tønder hartkorn of land managed by its tenant farms.

In 1669, Redtz ceded the estate to Frederick III in exchange for Børgyum Abbey. Frederick III renamed the estate Kongsdal. After Frederick III's death, Kongsdal passed to his son George, Prince of Denmark, who shortly thereafter ceded it to Christopher Parsberg in exchange for Jungshoved. On Parsber'g death in 1672, Kongsdal passed to his brother-in-law Otte Pogwisch. Pogwisch ended up deep in debt and had to sell some of the land. The rest of the estate was after his death sold in public auction to Valdemar Gabel. Up through the 18th century, Kongsdal changed hands many times. In 1718, it was acquired by general Gregers Juel. In 1731, he sold the estate to colonel Johan von Schack. He added more land through the acquisition of a number of new tenant farms but developed a reputation for mistreating the peasants on his estate.

Lorents Lassen, who owned Kongsdal from 1774, improved the management of the estate. His son, Niels Lassen, continued his father's work but was by the difficult times forced to sell the estate in 1812. The new owner was Peder Bech.

In 1835, Kongsdal was acquired by Hector Frederik Janson Estrup, the director of Sorø Academy, who had just married Anna Christine Scavenius. He resigned in 1837 to concentrate on managing his estate. Hector Estrup, who held a doctoral degree in history, established a number of libraries and schools on the estate and also wrote a book about its history. His son, Jacob Brønnum Scavenius Estrup, inherited Kongsdal in 1846 but lived at Skaføgaard in Jutland while his mother stayed at Kongsdal. He was one of the leading politicians of his time and served as Prime Minister in 1874-1894. Estrup passed away at Kongsdal in 1913 but had by then already ceded the estate to his son. [1]

Kongsdal farm house is located in the Holbæk Municipality of Region Zealand. The farm is forested and the forest type in the estate is of Cold-deciduous Forest. The Vegetation Zone belongs to the Cool Temperate Moist Forest of the Holdridge Bioclimatic Zone. [2]

Soil type of Cambisols (CM) in the estate area is of moderate soils. At shallow depths, the soil indicates color or structure changes different from the parent soils. [2] 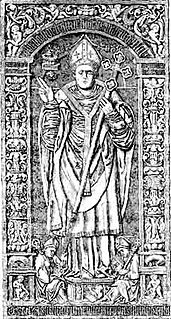 Absalon was a Danish statesman and prelate of the Catholic Church who served as the bishop of Roskilde from 1158 to 1192 and archbishop of Lund from 1178 until his death. He was the foremost politician and church father of Denmark in the second half of the 12th century, and was the closest advisor of King Valdemar I of Denmark. He was a key figure in the Danish policies of territorial expansion in the Baltic Sea, Europeanization in close relationship with the Holy See, and reform in the relation between the Church and the public. He combined the ideals of Gregorian Reform with loyal support of a strong monarchical power.

Jacob Brønnum Scavenius Estrup,, was a Danish politician, member of the Højre party. He was Interior Minister from 1865 to 1869 in the Cabinet of Frijs and Council President as well as Finance Minister from 1875 to 1894 as the leader of the Estrup Cabinet. At 23 years, he was the longest sitting Danish minister ever.

Antvorskov Monastery was the principal Scandinavian monastery of the Catholic Order of Saint John of Jerusalem, located about one kilometer south of the town of Slagelse on Zealand, Denmark. 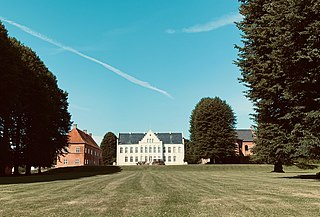 Halsted Priory, formerly a small Benedictine house, is a manor house and estate located close to Nakskov on the island of Lolland in southeastern Denmark. The estate was renamed Juellinge when the Barony of Juellinge was restored for Jens Juel-Vind in 1721, but its old name was restored when the barony was dissolved in 1921. Holsted Priory is still owned by the Krag-Juel-Vind-Frijs family. The Neo-Gothic main building is from 1847-49. It is flanked by Halsted Church to the north and the old main building from 1591 to the south. The old main building has been renovated with support from Realdania and is now operated as a local cultural centre. The Baroque-style park covers approximately 6.5 hectares of land. The estate is also home to a golf club.

Gjorslev is a cruciform medieval castle located 17 km south-east of Køge, on the Stevns Peninsula, Stevns Municipality, some forty kilometres south of Copenhagen, Denmark. Originally owned by the Bishop of Roskilde, it is considered one of the most well-preserved examples of Gothic secular architecture in Denmark. 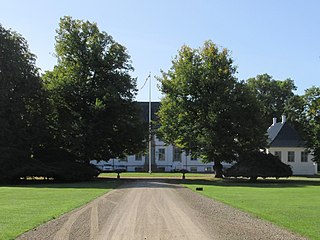 Eriksholm Castle is a manor house located at the foot of the Isefjord inlet, 6 km south-east of Holbæk, in east Denmark. The history of the estate dates back to 1400 but today's house was built in 1788 to a Neoclassical design by Caspar Frederik Harsdorff, the leading Danish architect of the time. It was listed in the Danish registry of protected buildings and places in 1918.

Pandebjerg is a manor house on the island of Falster in southeastern Denmark. It has been owned by members of the Tesdorpf family since 1878. The current main building is from 1900.

Petersgaard is a Neoclassical manor house and agricultural estate located between Kalvehave and Vordingborg in Vordingborg Municipality, on the southern part of Zealand, in southeastern Denmark. The Neoclassical main building overlooks Ulvsund and the Queen Alexandrine Bridge, with the island of Møn in the background. 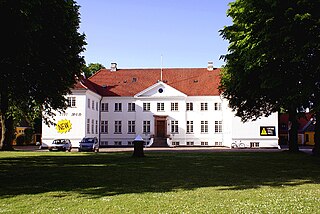 Holbæk Ladegård is a former manor house at Holbæk, Denmark. It is now home to Kunsthøjskolen, a folk high school specializing in art programmes. Holbæk Ladegård was for centuries a home farm under Holbæk Castle, which was built to protect Holbæk and was held in fee by royal vassals.

Aastrup is a manor house and estate in Elverdamsdalen, between Tølløse and Hvalsø, Lejre Municipality, some 40 kilometres west of Copenhagen, Denmark.

Christianssæde is a manor house and estate located close to Maribo on the island of Lolland in southeastern Denmark.

The Danish Constituent Assembly is the name given to the 1848 Constitional assembly at Christiansborg Palace in Copenhagen, that voted the Danish Constitution and formalized the transition from absolute monarchy to constitutional democracy. It consisted of members of which 114 were elected by the people, 38 were appointed by the king and the rest were government ministers.

Turebyholm is a manor house in Faxe Municipality, some fifty kilometres southwest of Copenhagen, Denmark. It was acquired by Adam Gottlob Moltke in 1746 and has remained in the hands of the Moltke family to the present day. It was part of the Countship of Bregentved from 1756 to 1920 and still shares its ownership with the Bregentved estate. The current Rococo-style main building was constructed by royal architect Niels Eigtved in 1750. It was listed on the Danish registry of protected buildings and places in 1918.

Hærbygaard is a manor house and estate located on Tuse Næs, Holbæk Municipality, some 80 kilometres west of Copenhagen, Denmark. The current main building was constructed for Melchior Grevenkop-Castenskiold in 1861-62 and later expanded with a new north wing by Gotfred Tvede in 1900-1901.

Lekkende is a manor house and estate located 8 km south of Præstø, Vordingborg Municipality, Denmark. The estate was from 1774 to 1993 owned by members of the Raben/Raben-Levetzau family, The main building is from 1838 but was heightened by one storey in 1880.

Store Frederikslund is a manor house and estate located eight kilometres northeast of Slagelse, Slagelse Municipality, Denmark. One of several estates that was established when Antvorskov Cavalry District was sold in public auction. it was established by General Hans Henrik von Eickstedt in 1783 and later owned by the Castenschiold/Grevenkop-Castenschiolds family from 1786 to 1995. The Neoclassical main building from the 1780s was probably designed by Andreas Kirkerup. It was listed on the Danish registry of protected buildings and places in 1918.

Peder Reedtz, a favourite of Frederick II of Denmark, was avener, lensmann and landowner. He owned Hørbygaard and Tygestrup at Holbæk. 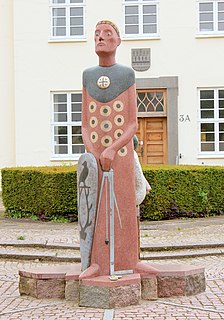 Esbern Snare, also known as Esbern the Resolute, (1127–1204) was a høvding, or chieftain, royal chancellor and crusader. His family were members of the powerful Hvide clan. In 1192, during the Crusades and after the fall of Jerusalem, he led a small group of Danish soldiers to the Holy Land. Upon his return, he had the Church of Our Lady, Kalundborg built.