The Korea Domestic Championship (Korean : 전국종합아이스하키선수권대회) is an annual ice hockey tournament played in South Korea. Any team from South Korea could participate, as long as it is a member of the Korea Ice Hockey Association.

Kim Jung-nam is a South Korean football manager and former football player. He is regarded as one of the greatest South Korean centre-back duos of all time with Kim Ho, his partner at that time. He played for the South Korea youth team in 1962 and also selected for the South Korea national team in that year. He was on the national team until 1973, and had 67 caps including games of the 1970 Asian Games where he won a gold medal. After his retirement, he managed the national team for the 1986 FIFA World Cup qualification, and South Korea qualified the FIFA World Cup for the first time in 32 years after the 1954 FIFA World Cup. After the World Cup, he won the 1986 Asian Games. He was also the manager who won the most games in the K League with 210 wins.

Cho Kwang-rae is a former South Korean football player and manager. He is the current executive director of Daegu FC.

Lee Hoe-taik is a former South Korean football player and manager. Lee was nicknamed "Leopard" in South Korea because of his innate stamina, rapid pace and powerful shots. He was also proficient in creating chances and gave many key passes to other forwards in the middle. He scored 21 goals with 81 caps in the national team and won eight Asian titles, including the 1970 Asian Games. He is widely regarded as one of the greatest forwards in South Korean football. He is also one of four players, inducted into the Korean Football Hall of Fame.

Lee Young-moo is a retired South Korean football player. He didn't have a great talent or physique, but he was the most active South Korean footballer of all time. He was noted for his tremendous work rate, and an unofficial record that he moved about 20 kilometers in a match is also remaining. He was situated as an attacking midfielder in the starting line up, but his actual role was difficult to sort due to his work rate which moved wide scope and took part in both the attack and the defense. He is a committed Christian and always did prayer ceremonies when he scored goals. His religious belief also helped his stamina and diligence. He won nine Asian titles with the national team, including the 1978 Asian Games.

The Korea Divisional Domestic Championship was a national ice hockey tournament that ran in South Korea for 47 years starting in 1954. The tournament was originally called the Student Ice Hockey Championship (학생아이스하키선수권대회).

Park Sung-hwa is a South Korea football manager and a retired football player.

Bang Sin-hye is a South Korean hurdler. She competed in the women's 100 metres hurdles at the 1988 Summer Olympics.

Park Jeong-hui is a South Korean judoka. He competed in the men's lightweight event at the 1988 Summer Olympics. 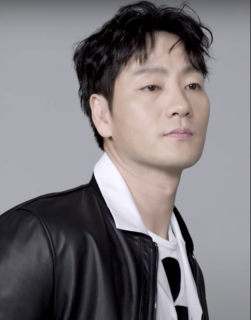 Jin Seon-kyu is a South Korean actor. He is best known for his role on the big screen, such as The Outlaws (2017) and Extreme Job (2019). He won Best Supporting Actor award at the 38th Blue Dragon Film Awards in 2017 for his performance in the film The Outlaws.

The All Joseon Football Tournament was the first Korean national football competition, held annually by the Joseon Sports Council or Joseon Football Association. The tournament of Joseon Sports Council, officially recognized as a predecessor of current Korean FA Cup, was founded in 1921 and was annually held in Gyeongseong with four divisions which divide by age. The Pyongyang YMCA and Kwanso Sports Council also annually held a tournament with the same name for the same period (1921–1942) in Pyongyang, but the popularly known competition is Gyeongseong tournament.