The first version of this article has been based in the text of el:Κώστας Δαβουρλής of the Greek Wikipedia published under GFDL.

Kostas Davourlis (Greek : Κώστας Δαβουρλής, 4 January 1948 – 23 May 1992), popularly nicknamed The Black Prince, was a former Greek footballer (central attacking midfielder) born in Agyia, Patras. [1] A gifted and talented player, he was voted by the Greek sports magazine "Ethnosport" as one of the 50 best Greek football players ever.

Having gained fame in Greece as the creative playmaker for Panachaiki FC, Davourlis attracted even more attention during the 1973 season, when he helped his team become the first Greek countryside football club ever to qualify for a European competition (the 1974 UEFA Cup). [2]

Davourlis was famed for his technical ability, his ball skill, his creative passes and his powerful shot in or outside the box; furthermore, his leadership was exemplary. [3] He was also a notable free kick taker, as demonstrated by his numerous goals from outside the penalty area.

In spite of the fact that his career had a rather bitter end for a player of his caliber, he is still worshiped by fans all over the Peloponnese. The Panachaiki Stadium bears his name since 1992, when he died due to a heart attack. [3]

Davourlis was born in Patras. Having been discovered by Panachaiki former player and scouter Spyros Voulgarakis, he began his playing career at the age of fourteen with a Panachaiki subsidiary team, Panionios Patron. Two years later he joined the senior team and contributed to Panachaiki's battle to reach the Greek first division. His most notable achievement at that time was that he became the first Greek football player to be selected for the national team while playing for a second division team. [4]

Finally, after several unsuccessful attempts, Panachaiki made it to the "big" division in 1969 and Davourlis' talent shone. However, the team was involved in a bribery scandal and sunk again to the lower division. Fortunately enough for Davourlis, they were back a year later and the Black Prince of Patras led Panachaiki's rise towards glory.

In the 1972 season, Davourlis scored 15 goals and Panachaiki finished sixth. The best was still to come though. After an amazing 1973 season in which he scored again 15 goals, including a hat trick in Toumba Stadium against championship contender PAOK, he achieved with Panachaiki something that no other Greek countryside club ever had done at the time: participation in a European competition, for instance the 1974 UEFA Cup. [2] In 1974, Davourlis' performances and leadership were still very good but rumors related to his transfer affected him considerably. Panachaiki proved to be unable to become a real threat to the local powerhouses and finished once again sixth. At the end of a season during which he scored 11 times in the Championship and once in the UEFA Cup, Davourlis was transferred to Olympiacos. The transfer fee was 9.25 million Drachmas, the highest in Greek football history at the time. [4]

At Olympiacos, Davourlis was one of the top players of the team, along with Georgios Delikaris, Yves Triantafyllos and Julio Losada. His team won one Greek Championship title and reached two consecutive Greek Cup finals, winning thanks to his goal in 1975 and losing in 1976. [5] [6] Nevertheless, his heart was travelling somewhere else.

In 1978, when Davourlis was transferred back to Panachaiki, almost nothing in Patras remained of the glorious team that fascinated Greece in the first half of the decade. Davourlis' presence increased the level of the team, but the results remained poor, leading to the club's relegation to the Second Division in 1981 and once again in 1985. [4] He ended his career with Korinthos FC in 1986. Later on he worked for Panachaiki as a scouter discovering many talents until the year he died, the most famous of whom is Grigoris Georgatos.

Davourlis earned his first cap with the Greek national football team on 23 July 1969, coming in as a substitute in the 75th minute of a friendly match against the Australia. Had Davourlis spent more years playing for a Greek powerhouse, the number of his national team selections would have been undoubtedly higher. [3] Destiny's choice, however, is something that will always remain strictly personal.

Olympiacos Football Club, also known simply as Olympiacos, Olympiacos Piraeus or with its full name as Olympiacos C.F.P., is a Greek professional football club based in Piraeus. Part of the major multi-sport club Olympiacos CFP, their name was inspired from the ancient Olympic Games and along with the club's emblem, the laurel-crowned Olympic athlete, symbolize the Olympic ideals of ancient Greece. Their home ground is the Karaiskakis Stadium, a 32,115-capacity stadium in Piraeus. 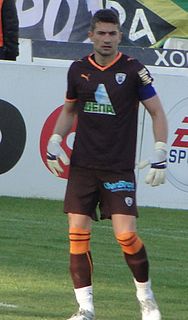 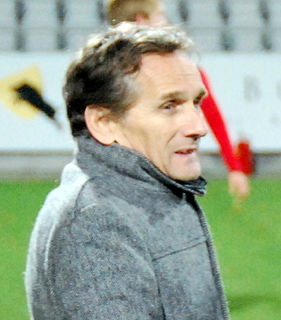 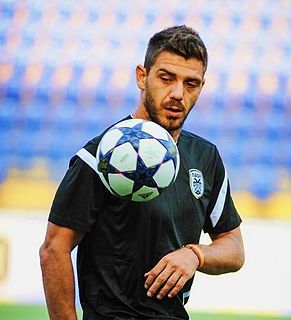 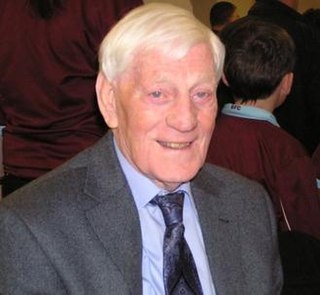 Leslie Shannon was an English football player and manager.

Spiros Livathinos is a former football player who played as a midfielder, coach and current scout of Panathinaikos.

Kostas Davourlis Stadium is a stadium in Patras, Greece. It is the home of Panachaiki FC. Work on the grounds started in 1935. Originally called Stadium of Panachaiki, it has been officially renamed Kostas Davourlis in 1992 after the great football player who died the same year.

The first version of this article has been based in the text of el:Βασίλης Στραβοπόδης of the Greek Wikipedia published under GFDL.

Andreas Michalopoulos, is a former Greek footballer (striker) born in Patras. He was a member of Panachaiki football team that qualified for the 1974 UEFA Cup.

Kostas Mendrinos is a Greek professional footballer who plays as a midfielder for Panargiakos. He has previously played for Olympiacos, Atromitos, Ionikos, PAS Giannina, Aris, Panachaiki and Panionios.

Anastasios Katsabis is a former Greek football player, who last played for Iraklis Thessaloniki F.C. in Greek Super League as a centre back. Katsabis started his career as a midfielder but when at PAOK, Angelos Anastasiadis tried him as a centre back because of his height. It was by playing his new position that he gained his first call-up in the Ethniki.

Dimitris Froxylias is a Cypriot professional footballer who plays as an attacking midfielder for Greek Super League 2 club Panachaiki.

Kostas Fortounis is a Greek professional footballer who plays as an attacking midfielder or a winger for Olympiacos, for which he is captain, and the Greece national team. He was born in Trikala, Thessaly but comes from the nearby village of Sarakina, close to the town of Kalabaka.

Alfred Ferko is a former Albanian football player and coach.