Kostas Davourlis Stadium is a stadium in Patras, Greece. It is the home of Panachaiki FC. Work on the grounds started in 1935. Originally called Stadium of Panachaiki, it has been officially renamed Kostas Davourlis in 1992 after the great football player who died the same year. [1]

It was inaugurated on June 6, 1939. Kostas Davourlis Stadium originally had one stand (south). It acquired its present horseshoe-like shape in 1974. The stadium is in a much better condition today than a few years ago. The placement of plastic seats and the construction of the roof (north stand) in 1997; the refurbishment of facilities below the stands (VIP club, cafeteria, club shop) and the installation of floodlights in 2000 have done much to upgrade it. [2]

The capacity of the stadium has changed frequently, peaking at 22,000 after a 1974 expansion. Since then there have been a number of reductions due to modernisations. Record attendance is 21.350 in a football match between Olympiacos Piraeus FC and Panathinaikos FC in 1982.

Adjacent the Kostas Davourlis Stadium is Panachaiki's arena for indoor sports, built in 1984.

The stadium can become much better, as there are still many problems. Access to the stadium and the lack of parking spaces are probably the most important of these. There is talk that a large car park will be constructed on the western side of the stadium, but this will only go through if the necessary funds are secured. [3] 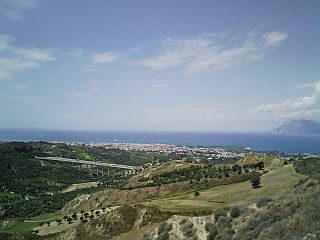 Agyia is a neighborhood of the city of Patras, Greece. It is located about 3.5 km north of downtown Patras. The community forms the mid-northern part of the city of Patras. Most of the street names are named after rivers. The town includes the church of St. Constantine.

De Grolsch Veste is the stadium of football club FC Twente. It is located in Colosseum 65, Enschede, Netherlands, at the Business & Science Park, near the University of Twente. The stadium has an all-seated capacity of 30,205 with a standard pitch heating system and has a promenade instead of fences around the stands. It hosted the final of the UEFA Women's Euro 2017.

Niedersachsenstadion[ˈniːdɐzaksn̩ˌʃtaːdi̯ɔn] is a football stadium in Hanover, Lower Saxony, Germany, which is home to Bundesliga football club Hannover 96.

Toumba Stadium is a football stadium in Thessaloniki, Greece. It is property of AC PAOK. The official name of the stadium is simply PAOK Stadium, but through the years it has become synonymous with the borough it is built at, the borough of Toumba.

The Kleanthis Vikelidis Stadium or Charilaou Ground is a football stadium in Thessaloniki, Greece. It was built in 1951 as the home stadium of Aris F.C. (Thessaloniki), one of the most popular football clubs in Greece. For many years, the ground's official name was Aris Stadium, until it was renamed in honor of Kleanthis Vikelidis, a legendary player of Aris FC in the 1930s. However, most commonly referred to as "Charilaou Stadium", after the district in which it was built. The stadium's capacity was 23,200 although it got limited to 22,800 after the renovations for the 2004 Summer Olympics, where it served as a training ground for Football at the 2004 Summer Olympics. Its facilities include dressing rooms, a gym, a swimming pool, VIP boxes, a VIP lounge, a restaurant with pitch view and press rooms.In 2019 after a new renovation at gate 7 the stadium's capacity is 24,000 seats.

The MCH Arena is an association football stadium situated in the south of Herning, Denmark, that is part of MCH Messecenter Herning complex and owned by MCH Group A/S. It has been the home ground of FC Midtjylland since March 2004. An integrated part of the arena is a main building housing the club's administration and offices for the official fan club, and includes player and referee facilities, a restaurant, a VIP lounge, press and sky boxes, and a club shop. The total capacity during domestic matches is 11,432 spectators with 7,070 seatings making it the 9th largest football stadiums in Denmark. At international FIFA and UEFA matches, the capacity of the four covered single-tiered stands is reduced to 9,430, when the terraces at the north and south stands are converted to an all-seater mode. The stadium's current attendance record of 11,763 spectators dates back to a 2017–18 Danish Superliga match on 11 November 2007, when FC Midtjylland tied 2–2 against FC Copenhagen.

AEL FC Arena is the home ground of the Greek football club AEL.

MDCC-Arena is a multi-purpose stadium in Magdeburg, Germany. It has been completed and opened to the public in December 2006, replacing the old Ernst-Grube-Stadion. It is mostly used for football matches and hosts the home matches of 1. FC Magdeburg.

The first version of this article has been based in the text of el:Κώστας Δαβουρλής of the Greek Wikipedia published under GFDL.

Andreas Michalopoulos, is a former Greek footballer (striker) born in Patras. He was a member of Panachaiki football team that qualified for the 1974 UEFA Cup.

Agia Sofia is a neighbourhood that lies directly north of the centre of Patras, Greece. It takes its name from the Agia Sofia church, which is the main church of the neighbourhood. The church is one of the largest in Patras and it is dedicated to the 6th-century Christian martyr Saint Sophia.

Panegialios (Greek: Παναιγιάλειος Γ.Σ. is a football club based in Aigio, Greece. Panaigialios has a long tradition in Greek football championships and has several appearances in the Greek Super League, 2nd Division and 3rd Division. Additionally the team has reached twice the semi-finals of the Greek Cup competition. Panegialios is one of the most successful and popular teams in Achaea and Peloponnese. 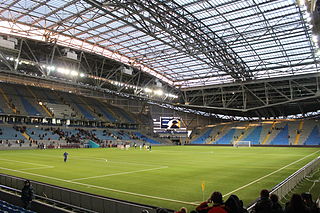 The Astana Arena is a football stadium in Nur-Sultan, Kazakhstan. The stadium holds 30,000 and has a retractable roof. It serves as the national stadium for the Kazakhstan national football team. Astana Arena is the second largest stadium in the country and it was built from 2006 to 2009 at a cost of $185 million, and was officially opened on 3 July 2009. It is also a home ground for FC Astana of the Kazakhstan Premier League and FC Bayterek of the Kazakhstan First Division. The stadium hosted the opening ceremony of the 7th Asian Winter Games on 31 January 2011. Astana Arena was one of the venues to bid to host UEFA Euro 2020 matches.

Pancho Aréna is a stadium in Felcsút, Hungary. It is used mostly for football matches and is the home stadium of Puskás Akadémia FC. Between 2015 and 2018 the stadium was the home also for the three-time champions MOL Vidi FC due to the reconstruction of Sóstói Stadion.

Konstantinos "Kostas" Rougalas is a Greek professional footballer who plays as a centre-back for Romanian club Dunărea Călărași.