He was born in Volos in 1916 and died in Athens in 1995. He was the husband of Dimitra Seremeti (b. 1933) and brother of the actor Nikos Papachristos. He played mostly military, police and other roles. His marriage was childless.

Kostas Sommer is a Greek/German Lobbyist, Entrepreneur and very well known Actor, Television host who has appeared in numerous movies and TV shows. In 2005, he appeared in the Hollywood film Deuce Bigalow: European Gigolo starring Rob Schneider, as the Greek gigolo Assapopoulos Mariolis. The role was Sommer's first Hollywood role, after his only audition since arriving in Los Angeles.

Kostas Kazakos, is a Greek actor, director, and politician.

Kostas Skandalidis is a Greek Politician and member of the Greek Parliament for the Panhellenic Socialist Movement (PASOK) for the Athens A constituency.

Kostas Martakis is a Greek singer, model, television host and actor, who rose to fame after appearing on Greek talent show Dream Show aired by Alpha TV in 2006. Following his participation, he released five studio albums and also participated in the Greek national final for the Eurovision Song Contest 2008 and 2014. In 2011, he participated in the second season of Greece's Dancing with the Stars, placing second and three years later he was in the backstage host featuring Doukissa Nomikou. In 2013, he took part in the first season of Your Face Sounds Familiar.

Konstantinos (Kostas) Palios was a Greek actor. He played secondary roles in many movies. His most popular appearance was in The kopani of Giorgos Konstantinou as a paper robber duke. His final appearance of his career was in the serial Sofia orthi. He played in 37 movies and 6 television series.

Stavros Paravas was a Greek actor.

Kostas Tsakonas was a Greek actor.

Kostas Karras was a Greek actor and politician. 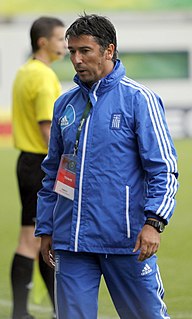 Kostas Tsanas is a Greek former professional footballer who played as a midfielder. He is the current academies director of AEK Athens.

Stergios Papachristos is a Greek rower.

Papachristos, also transliterated as Papahristos, is a Greek surname. Notable people with the surname include:

Kostas Pilea , is a Cypriot footballer who plays for Cypriot First Division club Anorthosis. He plays as a Left Back.

Konstantinos "Kostas" Mourouzis, also known as Dinos Mourouzis, was a Greek professional basketball player and coach. His nickname was, "The Fox of the Bench".

Tasos Papachristos is a Greek professional footballer who plays as a left-back for Super League 2 club Chania.