His first appearance was in film and he became famous after appearing in a short length movie Kostas Zirinis. Later, he played many protagonistic roles in film, theater and in television. He appeared in several films including Mathe pedi mou gramata , Mathe pedi mou basket , Yia mia houfta touvla , Klassiki periptosi vlavis and O fakiris". 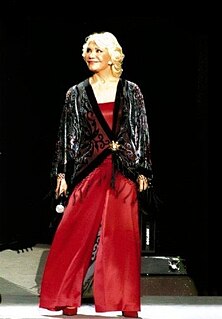 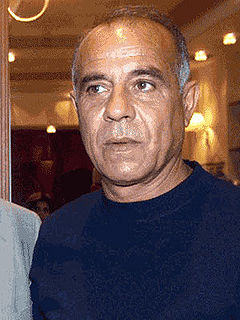 Giorgos Koudas is a Greek former professional footballer who played as an attacking midfielder. He spent his entire career in PAOK. Due to his fierce competitiveness and his Macedonian heritage, his nickname was Alexander the Great.

Dimitris Nikolaidis was a Greek actor.

Kostas Triantafyllopoulos is a Greek actor. After studying at the Theodosiadis Drama School of Athens, he graduated in 1977 and he has since played a wide variety of roles on stage from Greek tragedy, Aristophanes and Shakespeare to contemporary American drama.

Loukas Yorkas born in Aradippou, Cyprus, on 18 October 1986, is a Cypriot singer and the winner of the first season of the Greek version of the television talent series The X Factor. In September 2009 he released his first EP album, Mazi, which attained gold certification. He studies Biology at the University of Patras. Loukas Yorkas represented Greece in the Eurovision Song Contest 2011 in Germany along with Stereo Mike, with the song "Watch My Dance", placing seventh with 120 points.

Pio Konta is the second album released by Greek singer Kostas Martakis, released in Greece and Cyprus on 12 November 2009 by Universal Music Greece. The album has eleven songs in total, including two English language songs. Furthermore, five songs were recorded and produced at Lionheart Studios in Stockholm, Sweden. The album went gold within four days of its release, and was later certified platinum.

Ivi Adamou is a Greek Cypriot singer. She was born and raised in Agia Napa, Cyprus and currently resides in Alexandroupoli, Greece. Adamou rose to recognition in Greece and Cyprus following her participation in the second season of the Greek version of The X Factor, where she was under the mentorship of Giorgos Theofanous. Right after her elimination from the X Factor, Adamou secured a recording contract with Sony Music Greece. She gained further recognition from her participation in the Eurovision Song Contest 2012, where she represented Cyprus with the song "La La Love".

Stavros Xenidis was a Greek actor. He was married to actress Margarita Lambrinou.

Gia mia houfta touvla is a 1987 Greek comedy film which was released straight to video. It was written by Manos Venieris and directed by Takis Vougiouklakis and stars Kostas Tsakonas, Tasos Kostis, Vera Gouma and Kostas Rigopoulos.

Classic situation of Malfunction is a 1987 Greek comedy film, released on video only. It was directed and written by Takis Vougiouklakis. It starred Kostas Tsakonas and Tasos Kostis as two very incompetent repairmen of household appliances.

Entasi is the third studio album by Greek singer Kostas Martakis, released in Greece and Cyprus on 5 December 2011 by Universal Music Greece. The album has fifteen songs in total, including an English language song, two duets, three covers, and one remix.

Stan, is a Greek singer, songwriter and fashion model.

Vassilis Charalampopoulos is a Greek actor. He has played in a lot of successful films, such as the film Bang Bank or the TV series Eisai to Tairi mou, Englimata and To Deka. He has won a Greek State Film Award for the film Pente Lepta Akoma and one television award for the TV Series To Deka. He has also won one theatral award for the play The Frogs of Aristophanes that was presented in 2003.

Thymios Karakatsanis was a Greek actor with a notable career in theatre. He was born in Piraeus on 8 December 1940. He studied at Art Theatre of Karolos Koun. His first professional role was in the play Thyrida of Tardieu in 1963. He appeared in a few films but he became well known mainly from his roles in the plays of Aristophanes. He played the role of Lysistrata three times. He appeared frequently at theatre of Ancient Epidavros. In 1978, he founded the group New Greek Stage and he presented famous plays, starting with the play Von Dimitrakis of Dimitris Psathas. In 1987 he won a theatre award for his role in Death of a Salesman of Arthur Miller. In the same period he also worked as a radio presenter. The play Death of a Salesman was his last role. He died on 30 June 2012 at the age of 72 years.