Kote Tsintsadze (Georgian :კოტე ცინცაძე, Russian : Котэ Цинцадзе) (1887–1930) was a Georgian Bolshevik who was the first chairman of Georgian Cheka and involved in the Russian Revolutions and the Sovietization of Georgia. He was purged under Joseph Stalin as a member of the Left Opposition within the Communist Party of the Soviet Union.

Tsintsadze joined the Russian Social Democratic Labour Party in 1904, and sided with its Bolshevik faction. During the Russian Revolution of 1905, he was closely associated with the famous revolutionary fighter Simon Petrosian, better known as Kamo and served as head of the Bolshevik armed detachments that engaged in expropriation and robbery organised in the Manganese mine of Chiatura. He organised a group of female student-revolutionaries (who were in love with him) to rob banks. [1]

In 1906 he took part in the execution of traitors after the Bolshevik battle squads were driven out of the cities. On February 16, 1906, Tsintsadze took part in the assassination of Commander in chief of the Caucasus, General Fyodor Griiazanov (nicknamed General Shitheap). Joseph Stalin commissioned the hitmen who pretended to be painting a nearby gate. They threw grenades at his carriage and blew him to pieces. [2] Then Stalin commissioned him to set up the Druzhina (outfit) or Bolshevik expropriator's club for robbing banks. He robbed the Tiflis pawn shop, the Georgian Bank of Agriculture, a train at Kars, a stagecoach in Borzhomi, stole 20,000 rubles from the Kadzhorskoe stagecoach and ambushed a gold train at Chiatura carrying 21,000 roubles of miners' wages. [3] He was at Stalin's wedding supper in 1906. In 1907 he was arrested by the Okhrana, then joined Stalin's 'Mauserists' in Baku. [4] On August 15, 1912 he helped spring Kamo from Tiflis prison. On September 24 the two of them ambushed a mail coach with 18 gunmen three miles from Tiflis. They were beaten back though seven Cossacks died. After this, the Druzhina was destroyed. [5]

Later, he became the first permanent chairman of the Georgian Cheka, which was established in February 1921, immediately following the Soviet invasion of Georgia. At the same time, he was a member of the Communist Party Central Committee and of the Central Executive Committee of the Communist Party of the Georgian SSR. Although ruthless against the widespread anti-Soviet opposition in Georgia, he was a strong proponent of Georgian sovereignty from Moscow and, during the 1922 Georgian Affair, engaged in a bitter political confrontation with Stalin and Sergo Ordzhonikidze whom the Georgian moderate Communists accused of "Great Russian chauvinism". As a result, Tsintsadze was denounced as a "national deviationist" and removed from his posts later that year, being replaced by E. A. Kvantaliani, who was more compliant with the centralizers' policy. [7] Having joined the Left Opposition in 1923, Tsintsadze was excluded from the Communist Party in 1927 and arrested in 1928. He died in prison of tuberculosis.

Nadezhda Sergeevna Alliluyeva was the second wife of Joseph Stalin. Born in Baku to a revolutionary and friend of Stalin, she was raised in Saint Petersburg. Having known Stalin from a young age, the two married when she was 18, and they had two children. Alliluyeva worked as a secretary for Bolshevik leaders, including both Vladimir Lenin and Stalin, before enrolling at the Industrial Academy in Moscow to study synthetic fibres and become an engineer. Alliluyeva had several health issues, which combined with her interest in pursuing an independent, professional career led to frequent arguments with Stalin, who wanted his wife to maintain a domestic role. On several occasions, Alliluyeva contemplated leaving Stalin, and after an argument shot herself the night of 9 November 1932.

Ekaterine "Kato" Svanidze was the first wife of Joseph Stalin and the mother of his eldest son, Yakov.

The August Uprising was an unsuccessful insurrection against Soviet rule in the Georgian Soviet Socialist Republic from late August to early September 1924.

Freedom Square, formerly known as Erivansky or Paskevich-Erivansky Square under Imperial Russia and Beria Square and Lenin Square while part of the Soviet Union, is located in the center of Tbilisi at the eastern end of Rustaveli Avenue.

Avel Safronovich Yenukidze was a prominent Georgian "Old Bolshevik" and, at one point, a member of the Central Committee of the All-Union Communist Party (b) in Moscow. In 1932, along with Mikhail Kalinin and Vyacheslav Molotov, Yenukidze co-signed the infamous "Law of Spikelets". In 1918 to 1935 Yenukidze served as a secretary of the All-Russian Central Executive Committee and the Central Executive Committee of the Soviet Union.

The Committee for the Independence of Georgia or the Parity Committee was an underground anti-Soviet organization active in the Georgian Soviet Socialist Republic in the early 1920s. It is commonly known as "Damkom". The Committee was responsible for the preparation and guidance of the abortive August Uprising of 1924.

Mikhail Grigoryevich Tskhakaya, also known as Barsov, was a Georgian communist. Barsov was a senior leader in the Bolshevik movement in Georgia, having been active in revolutionary politics since 1880. He was one of the five signatories of the Document that formed Soviet Union. 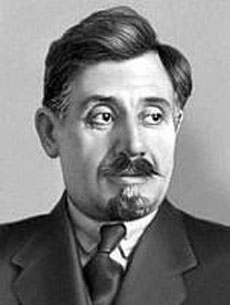 Simon Arshaki Ter-Petrosian, better known by his nom de guerre of Kamo, was an Old Bolshevik revolutionary and an early companion to Soviet leader Joseph Stalin.

Sergey or Sergo Kavtaradze was a Soviet politician and diplomat who briefly served as head of government in the Georgian SSR and as Deputy Prosecutor General of the Soviet Union. A Georgian Bolshevik activist, he was persecuted for his Trotskyist activities, but was pardoned and reinstated by his personal friend Joseph Stalin.

Alexander Semyonovich "Alyosha" Svanidze was a Georgian Old Bolshevik and historian. He was a personal friend of Joseph Stalin and a brother of Stalin’s first wife Kato. Nevertheless, Stalin had him arrested during a purge in 1937. He was shot in prison in 1941.

The early life of Joseph Stalin covers the life of Joseph Stalin from his birth on 6 December 1879 until the October Revolution on 25 October 1917. Born Ioseb Jughashvili in Gori, Georgia to a cobbler and a house cleaner, he grew up in the city and attended school there before moving to Tiflis to join the Tiflis Seminary. While a student at the seminary he embraced Marxism and became an avid follower of Vladimir Lenin, and left the seminary to become a revolutionary. After being marked by Russian secret police for his activities, he became a full-time revolutionary and outlaw. He became one of the Bolsheviks' chief operatives in the Caucasus, organizing paramilitaries, spreading propaganda, raising money through bank robberies, and kidnappings and extortion. Stalin was captured and exiled to Siberia numerous times, but often escaped. He became one of Lenin's closest associates, which helped him rise to the heights of power after the Russian Revolution. In 1913 Stalin was exiled to Siberia for the final time, and remained in exile until the February Revolution of 1917 led to the overthrow of the Russian Empire.

Joseph Stalin was a Georgian born student radical who became a member and eventually became leader of the Bolshevik faction of the Russian Social Democratic Labour Party. He served as the General Secretary of the Central Committee of the Communist Party of the Soviet Union from 1922 until his death in 1953. In the years following the death of Vladimir Lenin, he rose to become dictator of the Soviet Union, using a combination of manipulation and terror to destroy his opposition.

Karl Viktorovich Pauker was an NKVD officer and head of Joseph Stalin's personal security until his arrest and execution.

Yelena Dmitriyevna Stasova was a Russian communist revolutionary who became a political functionary working for the Communist International (Comintern). She was a Comintern representative to Germany in 1921. From 1927 to 1937 she was the president of International Red Aid (MOPR). From 1938 to 1946 she worked on the editorial staff of the magazine International Literature. 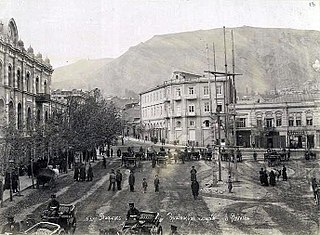 The 1907 Tiflis Bank Robbery, also known as the Erivansky Square expropriation, was an armed robbery on 26 June 1907 in the city of Tiflis in the Tiflis Governorate in the Caucasus Viceroyalty of the Russian Empire. A bank cash shipment was stolen by Bolsheviks to fund their revolutionary activities. The robbers attacked a bank stagecoach, and the surrounding police and soldiers, using bombs and guns while the stagecoach was transporting money through Erivansky Square between the post office and the Tiflis branch of the State Bank of the Russian Empire. The attack killed forty people and injured fifty others, according to official archive documents. The robbers escaped with 241,000 rubles. 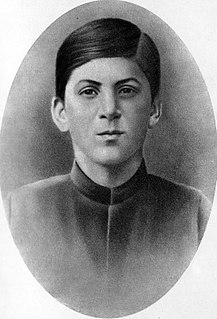 Before he became a Bolshevik revolutionary and the leader of the Soviet Union, Joseph Stalin was a promising poet.