T. Krishna Kumari (6 March 1933 – 24 January 2018) was an Indian actress. She worked predominantly in Telugu films, in addition to Tamil and Kannada films in the 1950s and 1960s. [2] She was the sister of South Indian actress Sowkar Janaki.

Krishna Kumari was born on 6 March 1933 a Kannada-speaking [4] Madhwa Brahmin family [5] at Naihati, West Bengal to T. Venkoji Rao and Sachi Devi. Her family hails from Rajahmundry, Andhra Pradesh. Owing her father's work, Kumari was schooled at Rajahmundry, Madras, Assam and Calcutta. She completed her matriculation is Assam. [6] Her sister, Sowkar Janaki is also an actress. [7]

T. Krishna Kumari started her career with a small role in Pathala Bhairavi (Telugu) and Gunasagari (Kannada). She later played the role of a heroine for the first time in Navvithe Navaratnalu the same year. She featured as leading actress in several Tamil movies, notably Thirumbi Paar (1953), Manithan (1953), Azhagi (1953), Pudhu Yugam (1954), Viduthalai (1954) and Thuli Visham (1954). Krishna Kumari then began to focus on Telugu cinema, which propelled her to stardom. Her movies "Pelli Meeda Pelli (1959)", Bharya Bhartalu (1961), Vagdanam (1961), Kulagothralu (1962), Gudi Gantalu (1964) remain some of Telugu cinema's classics. In the early 60s, Krishna Kumari entered the Kannada film industry briefly, choosing to return to her preferred Telugu cinema within years. But in the short span of 5–6 years, she gave memorable performances, most of them co-starring Dr Rajkumar. In fact, her first ever award was for the Rajkumar starrer, Bhaktha Kanakadasa (1960). In Hindi, she acted in Kabhi Andhera Kabhi Ujala (1958). She was rechristened Rati but again, Hindi cinema held no attraction for Krishna Kumari. Although she had several offers in Hindi cinema, she returned to Madras. Her most successful movies have been with Akkineni Nageswara Rao, NT Rama Rao and also several mythological roles with Tadepalli Lakshmi Kantha Rao. [8] [9]

Krishna Kumari acted in 150 Telugu films, and about 30 Tamil and Kannada films. Her repertoire won her fans across Telugu states and the President's Award. [10]

After marriage, Krishna Kumari chose to step away from the arclights and moved to her husband's farmhouse near Bangalore, where she devoted herself to her family and developed her interests in cooking and gardening. Krishna Kumari and Khaitan had a daughter, Dipika; according to some reports, Dipika was adopted by the couple. [12] Dipika married Vikram Maiya, the son of the Maiya family which owns the famous MTR restaurant in Bangalore and the MTR brand of ready-to-eat foods. [13]

Ajay Mohan Khaitan died in 2012 aged 85. Krishna Kumari continued to live at her farmhouse in Bengaluru with her daughter, son-in-law and grandson. 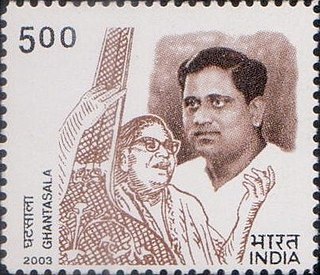 Ghantasala Venkateswararao, known mononymously by his surname as Ghantasala, was an Indian playback singer and film composer known for his works predominantly in Telugu and Kannada cinema and also in Tamil, Malayalam, Tulu and Hindi language films. In 1970, he received the Padma Shri award, India's fourth highest civilian award for his contribution to Indian cinema. According to The Hindu and The Indian Express, Ghantasala was 'such a divine talent and with his songs he could move the hearts of the people'. 'Ghantasala's blending of classical improvisations to the art of light music combined with his virtuosity and sensitivity puts him a class apart, above all others in the field of playback singing'. Gifted with what Indian film historian V. A. K. Ranga Rao called 'the most majestic voice', Ghantasala helped Telugu film music develop its own distinct character which remains unparalleled. He is referred to as the 'Gaana Gandharva' for his mesmerising voice and musical skills. 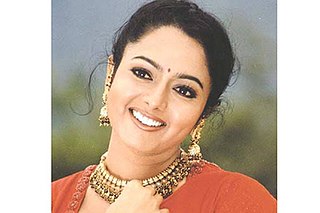 K. S. Sowmya, better known by her stage name Soundarya, was an Indian actress who worked predominantly in Telugu films in addition to Kannada and Tamil films. In 2002, she received the National Film Award for Best Feature Film as producer for the Kannada film Dweepa. She has also received three Nandi Awards, two Karnataka State Film Awards for Best Actress and several Filmfare Awards South for her performances in films such as Ammoru (1994), Pavitra Bandham (1996), Anthahpuram (1998), Raja (1999), Doni Saagali (1998), Dweepa (2002), and Apthamitra (2004). 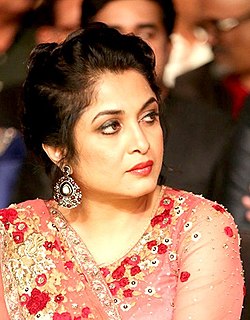 Savitri Ganesan was an Indian actress, playback singer, dancer, director, and producer known for her works primarily in Telugu and Tamil cinema. She had also worked in Kannada, Hindi and Malayalam films. She starred in more than 250 films over three decades. She was one of the highest-paid and most popular Indian actresses of the 1950s,60s, and early 70s. She is often referred as "Mahanati" which means "Great Actress" and "Nadigaiyar Thilagam" which means "Doyen of all the actresses". 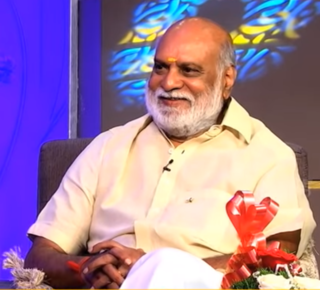 Kovelamudi Raghavendra Rao is an Indian film director, screenwriter, and producer known for his works predominantly in Telugu cinema besides having directed a few Hindi films. He has garnered seven state Nandi Awards and five Filmfare Awards South. In a film career spanning more than four decades, Rao has directed more than a hundred feature films across multiple genres such as romantic comedy, fantasy, melodrama, action thriller, biographical and romance films. 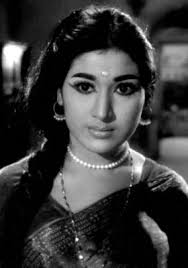 Vanisri is an Indian actress known for her works predominantly in Telugu, Tamil, and Kannada films. In a film career spanning 40 years, she has received three Filmfare Awards South, the Nandi Awards and the Tamil Nadu State Film Award. 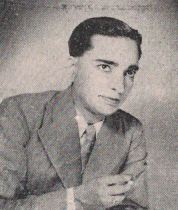 Yaragudipati Varada Rao was an Indian actor, screenwriter, director, editor, and producer, known for his works primarily in Telugu cinema, Kannada cinema, and Tamil cinema. Rao plunged into theatre and did a few stage plays before moving to Kolhapur and Bombay to act in silent films. Regarded as one of the greatest filmmaking pioneers of the Cinema of South India, he made motion-pictures across Telugu, Kannada, Tamil, Konkani and Hindi languages, apart from silent films. Rao started his career as a lead actor in many silent films such as Garuda Garva Bhangam, Gajendra Moksham and Rose of Rajasthan.

Rajanala Kaleswara Rao, known mononymously by his surname as Rajanala, was an Indian actor known for his works predominantly in Telugu cinema, Telugu theatre, and a few Tamil, Kannada, and Hindi films. In a film career spanning more than four decades, Rajanala acted in more than 1400 feature films in a variety of characters. Regarded as one of the finest method actors, Rajanala was known for his gruesome portrayals of lead antagonist roles during the Golden age of Telugu cinema. The Government of Andhra Pradesh and the film industry felicitated him for his achievements and contribution to Indian Film Industry. He won several Filmfare Awards South and Nandi Award. 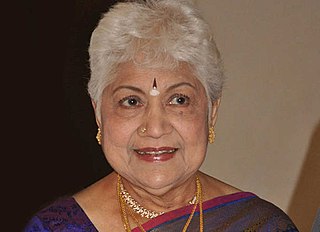 Sankaramanchi Janaki, popularly known as Sowcar Janaki or Shavukaru Janaki, is an Indian actress who has appeared in over 387 films, predominantly in Tamil, Telugu, and Kannada languages. She also performed on stage in over 300 shows and was a radio artist during her earlier years. She is the recipient of two Nandi Awards, Kalaimamani and India's fourth-highest civilian award Padma Shri. 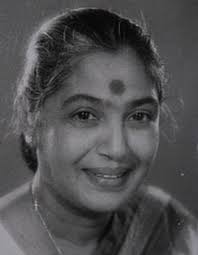 Nirmalamma was an Indian actress in the Telugu cinema. She has acted in more than 800 films. She was well known for her grandmother roles in several films.She won two Nandi Awards.

Kovelamudi Surya Prakash Rao (1914–1996) was an Indian film director, producer, actor and cinematographer known for his works in Telugu, Kannada, and Hindi films. In 1977 he won the Filmfare Award for Best Director – Kannada for Ganda Hendthi. In 1995, Rao received the Raghupathi Venkaiah Award for his contributions to Telugu cinema.

Bharya Bhartalu is a 1961 Indian Telugu-language drama film, produced by A. V. Subba Rao under the Prasad Art Pictures banner and directed by K. Pratyagatma. It stars Akkineni Nageswara Rao and Krishna Kumari, with music composed by S. Rajeswara Rao. The film was adapted from the Tamil novel Pennmanam by Lakshmi Tripurasundari. It was remade in Malayalam as Abhimaanam (1975).

Raavi Kondala Rao was an Indian actor, playwright, theatre artist, journalist, editor, producer, director and writer who appeared in Telugu films and performed in over 600 movies. Veteran actress Radha Kumari was his wife. His brother R Kaameswara rao was a leading dubbing artist.

Pelli Kanuka is a 1960 Indian Telugu-language romantic drama film, produced by and directed by C. V. Sridhar. It stars Akkineni Nageswara Rao, Krishna Kumari and B. Saroja Devi, with music composed by A. M. Rajah. The film is a remake of Sridhar's own Tamil film Kalyana Parisu (1959). It was released on 29 April 1960, and became a commercial success.

Durga Prabha, known by her stage name, Hema Chaudhary is an Indian actress who has predominantly acted in Kannada, Telugu, Malayalam and Tamil films. Starting her career as a lead actress in the Telugu film Pelli Kani Pelli in 1976, she switched over to supporting roles in the 1980s.

Sreeleela is an American actress of Indian origin who appears in Kannada and Telugu films. She made her debut in 2019 with Kiss for which she won SIIMA Awards Best Female Debut – Kannada.