While still a student, he was also active in the Norwegian resistance movement during World War II and was imprisoned as a Nacht und Nebel inmate. He was imprisoned in Veiten from June to July 1942, then in Bergen from July to September, then in Grini concentration camp from September to December. From December 1942 to June 1944 he was in Sachsenhausen concentration camp, then until September 1944 in Natzweiler-Struthof. He was then in Dachau concentration camp for three days, and Ottobrunn for one day. He was lastly in Dautmergen from September to November 1944 and Vaihingen until the war's end. [1]

After the war, he finished his studies at the University of Bergen, where he became the leader of the Det Norske Studentersamfund first in Bergen, and then as a full-time employee at the University of Oslo. He was the manager of the Foundation for Student Life in Oslo from 1950 to 1979. He led the commission that recommended the founding of regional university colleges throughout Norway and for establishment of the Norwegian State Educational Loan Fund. He also chaired the board of NRK from 1972 to 1979, and Nationaltheatret from 1981 to 1989. [2] [3]

After he retired, Ottosen wrote a series of historical accounts from World War II. These included memoirs from his work in the Norwegian resistance as well as thorough historical surveys of Norwegians who were arrested and detained by Nazi authorities during the war. For this work he was honored with the Fritt Ord Honorary Award in 2004, was made commander in the Royal Norwegian Order of St. Olav, and named honorary member of the Norwegian Labour Party. [4] [5] 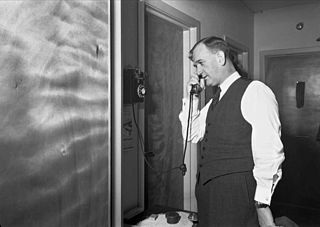 Prior to the deportation of individuals of Jewish background to the concentration camps there were at least 2,173 Jews in Norway. During the Nazi occupation of Norway 772 of these were arrested, detained, and/or deported, most of them sent to Auschwitz. 742 were murdered in the camps, 23 died as a result of extrajudicial execution, murder, and suicide during the war. Between 28 and 34 of those deported survived their continued imprisonment. The Norwegian police and German authorities kept records of these victims, and so, researchers were able to compile information about the deportees. 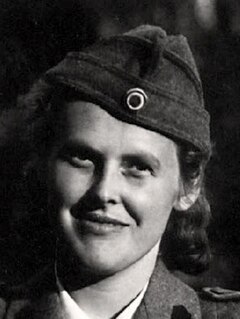 Wanda Maria Heger was a Norwegian social worker noted for her efforts to help Norwegian and other prisoners in Nazi concentration camps during World War II.

Olaf Bjerke was a Norwegian trade unionist and politician for the Communist Party.

"Theta" was a radio communications group that operated in Bergen, Norway during the German occupation of Norway, communicating with the British Secret Intelligence Service (SIS). The group was operative from December 1941 to June 1942.

Milly Elise "Lise" Børsum was a Norwegian resistance member during World War II, survivor from the Ravensbrück concentration camp, and known for her writings and organizing work after the war.

Sylvia Salvesen was a member of the high society in Norway, and a resistance pioneer during World War II. She was arrested and sent to the Ravensbrück concentration camp in Germany. She witnessed at the Hamburg Ravensbrück Trials in 1946, and wrote a memoir book documenting her wartime experiences.

Olaf Olsen Skramstad was a Norwegian politician for the Communist Party.

Oscar Ihlebæk was a Norwegian newspaper editor and resistance member.

Edmund Emil Norén was a Norwegian media executive and politician for the Labour Party.

Arne Serck-Hanssen was a Norwegian rower and physician.

Thoralf Johannes Irgens Evje was a Norwegian judge, civil servant and politician for the Labour Party.