Last updated September 06, 2020
Not to be confused with Kronstadt, Russia.
Place in Free State, South Africa

Kroonstad (Afrikaans directly translated "Crown City") is the third largest city in the Free State (after Bloemfontein and Welkom) and lies two hours drive on the N1 from Gauteng. Maokeng is an area within Kroonstad, and is occasionally used as a synonym of the town itself. [3] [4] It is the second-largest commercial and urban centre in the Northern Free State (after Welkom), and an important railway junction on the main line from Cape Town to Johannesburg. Maokeng is Sesotho and means "place of the thorn trees (mimosa trees)". [5] [6]

Kroonstad was established in 1855 [7] by the Irish pioneer Joseph Orpen, and was the first founded after the independence of the Orange Free State. While Kroon means "crown", this was in fact the name of a horse that had drowned in the nearby ford. A lover of animals, Orpen had witnessed the incident, and named the infant settlement in honour of the unfortunate creature. Similarly, the ford in question came to be known as Kroondrift. [7] [8]

During the Second Boer War, from 13 March to 11 May 1900, the city became the capital of the Orange Free State, and subsequently the site of a British concentration camp to contain Boer women and children.

The main industry of Kroonstad is agriculture. It is the centre of a rich agricultural district, producing maize, wheat, dairy and meat products and wool. The Bloemhoek Dam lies just east of the town and supplies much of its water needs. A caravan park and many more camp sites on the banks of the willow-lined Vals River (Valsrivier) are frequented by anglers and watersport enthusiasts.

Leisure opportunities are plentiful in Kroonstad, where visitors can enjoy golf on the 18-hole course in the town, lion tours and interaction with lion and tiger cubs at the Boskoppie Lion and Tiger Park, fishing in the well stocked Vals River or on the Bloemhoek Dam, and boating on the Serfontein Dam. Horseriding, gliding and hiking trails are also available. [ citation needed ]

Kroonstad lies directly on the N1, and bypasses the town to the east. Other regional roads in the town are the R34 to Odendaalsrus (south-west), the R76 to Steynsrus (south-east), the R721 to Vredefort (north-west) and the R82 to Heilbron (north-east).

Kroonstad Railway Station serves the town and is located on the important railway junction from Cape Town to Johannesburg via Bloemfontein.

On 4 January 2018, a passenger train, operated by Shosholoza Meyl, collided with a truck on a level crossing near Kroonstad/Hennenman. The train was derailed, and at least one of the carriages caught fire. Twenty people were killed and 260 were injured. [9]

Kroonstad is served by a small airport with no passenger flights.

Kroonstad is said to be one of the Free State’s loveliest towns and lies on the banks of the Vals River, a tributary of the Vaal, roughly two hours’ drive from Johannesburg. It is situated in an area characterised by open spaces and an abundant variety of vegetation that makes it particularly beautiful. Kroonstad is a quaint town that serves as a good stop over en route between Johannesburg and Bloemfontein, lying as it does at virtually the halfway mark. Kroonstad offers an array of activities that include flea markets, a tea garden, fishing on the Vals River or at the Bloemhoek Dam, walking trails and lion tours and lion and tiger interaction at Boskoppie Lion and Tiger park. Today, as an important administrative, agricultural and educational centre, Kroonstad still boasts much of the inherent rugged beauty which led the Voortrekkers to establish the town where they did.

Sporting facilities of all kinds are well catered for, notably for jukskei, an Afrikaner folk sport. The headquarters of the SA Jukskei Council has been established here since 1951. The city is rich in historical sights; several historic buildings and statues, a former concentration camp, the Sarel Cilliers Museum (although currently inactive) and other places of national interest can be found here. Kroonstad is an important agricultural service centre in the Free State with a predominantly agricultural-orientated economy served by a modern toll-road. This brings the PWV Region within two hours drive from Kroonstad as well as being accessible from the North West, Bloemfontein and the Eastern Free State.

A blockhouse south of the city is a reminder of later stages of the Second Boer War.

Stone corbelled huts, refuges for the prehistoric inhabitants of the region, occur in various locations about the city.

In addition, fossils and San rock art are present in the region.

By 1931, the Kroonstad municipal council had assumed a coat of arms. [10] It was registered with the Orange Free State Provincial Administration in February 1967 [11] and at the Bureau of Heraldry in April 1971. [12]

The arms were: Or, a tree on an island proper; on a chief Argent fimbriated Azure, a locomotive and tender Sable ("a golden shield displaying a tree on a grassy base, below a black locomotive and tender on a silver stripe across the top of the shield"). Originally, an imperial crown was placed above the shield, but it was replaced with a golden mural crown in the 1960s. The supporters were a black wildebeest and a blesbok, and the motto was Finis coronat opus .

Kroonstad has two sister cities whose names are reminiscent of its own: 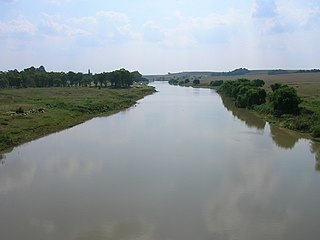 The Orange River Colony was the British colony created after Britain first occupied (1900) and then annexed (1902) the independent Orange Free State in the Second Boer War. The colony ceased to exist in 1910, when it was absorbed into the Union of South Africa as Orange Free State Province. 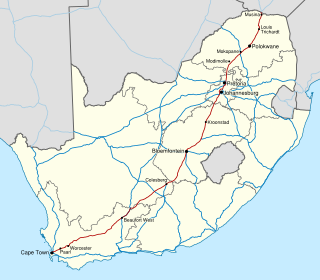 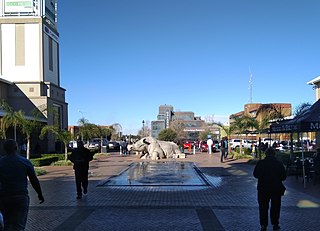 Bethlehem is a city in the eastern Free State province of South Africa that is situated on the Liebenbergs river along a fertile valley just north of the Rooiberg Mountains on the N5 road. It is the fastest growing town in the Free state province, with its target of being the third largest city after Bloemfontein and Welkom. 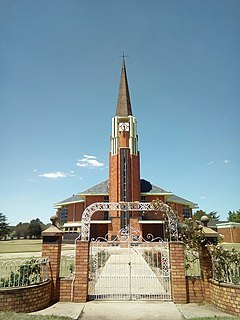 Petrus Steyn is a small farming town between Tweeling and Kroonstad, 35 km north-east of Lindley in the Free State province of South Africa. It is at the centre of an agricultural area known for wheat, maize, sunflower, potato, cattle,sheep production and forms part of the breadbasket in the Free State. It is the highest town above sea level in the Free State.

Hertzogville is a small cattle and sheep farming town in the Free State province of South Africa. It is named after South Africa's longest-serving prime minister James Barry Munnik Hertzog. 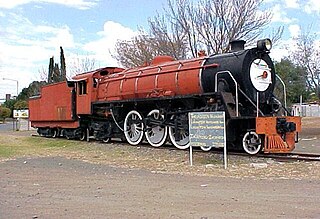 Theunissen is a small town that has the only wine estate, the Theunissen Wine Farm, in the Free State province of South Africa. It is located about 95 kilometers northeast of Bloemfontein and about 45 kilometers south of Welkom. It was founded by Boer War Commandant Helgaardt Theunissen. Theunissen has a small community which supports the local businesses. 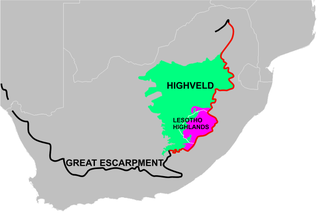 Pieter Jeremias Blignaut was a South African (Boer) civil servant, Government Secretary of the Orange Free State (1879–1902), and served twice as Acting State President, first after the death of President Brand (1888–1889), and again after the resignation of President Reitz in 1895–1896. After the conclusion of the South African War, Blignaut served as member of both the legislative council and the Legislative Assembly of the Orange River Colony. He was also a member of several state commissions.

The South African Railways Class 31-000 of 1958 was a diesel-electric locomotive. 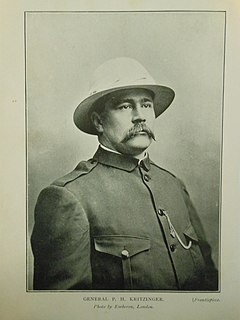 Orange Free State Command was a command of the South African Army, active from c. 1933 to c. 1999. Its headquarters was at Bloemfontein, seemingly for a period at the Tempe airfield, later to become the Tempe Military Base.