Last updated April 23, 2020
For other uses, see Kuban (disambiguation).
Not to be confused with Cuban.

Kuban (Russian and Ukrainian: Кубань; Adyghe : Пшызэ) is a geographic region of Southern Russia surrounding the Kuban River, on the Black Sea between the Don Steppe, the Volga Delta and the Caucasus, and separated from the Crimean Peninsula to the west by the Kerch Strait. Krasnodar Krai is often referred to as "Kuban", both officially and unofficially, although the term is not exclusive to the krai and accommodates the republics of Adygea, Karachay-Cherkessia, and parts of Stavropol Krai.

The settlement of Kuban and of the adjacent Black Sea region occurred gradually for over a century, and was heavily influenced by the outcomes of the conflicts between Russia and Ottoman Empire. [1] In the mid-18th century, the area was predominantly settled by the mountainous Adyghe tribes. [1] After the Russo-Turkish War of 1768–1774, the population of the area started to show more pro-Russian tendencies. [1]

Until the 1790s, these fortresses and the abandoned Cossack settlements on the Laba River and in Taman remained the only indication of Russian presence in the area. [1] More intensive settlement started in 1792–1794, when Black Sea Cossack Host and Don Cossacks were re-settled to this area by the Russian government in order to strengthen the southern borders. [1]

In the end of the 18th and the beginning of the 19th centuries, the right bank of the Kuban River was settled. [1] At the same time, first settlements appear on the coast of the Black Sea and on the plain between the Kuban and Bolshaya Laba Rivers. [1] During the second half of the 19th century, the settlement rate intensified, and the territory was administratively organized into Kuban Oblast and Black Sea Okrug (which later became Black Sea Governorate). [1]

The location of the territory along the border had a significant effect on its administrative division, which incorporated the elements of civil and military governments. [1]

The Republic of Adygea, also known as the Adyghe Republic, is a federal subject of Russia. It is geographically located in the North Caucasus region of European Russia, and is part of the Southern Federal District. Adygea covers an area of 7,600 square kilometers (2,900 sq mi), the fifth-smallest Russian federal subject by area, with its territory an enclave within Krasnodar Krai. Adygea has a population of 439,996.

Krasnodar Krai is a federal subject of Russia, located in the North Caucasus region in Southern Russia and administratively a part of the Southern Federal District. Its administrative center is the city of Krasnodar. The third most-populous federal subject, the krai had a population of 5,226,647 as of the 2010 Census. 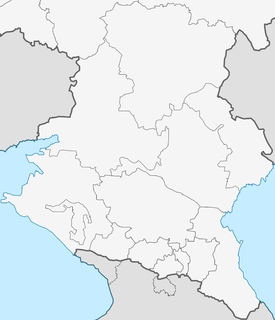 The North Caucasus, or Ciscaucasia, is the northern part of the Caucasus region between the Sea of Azov and Black Sea on the west and the Caspian Sea on the east, in Russia. Geographically, the Northern Caucasus includes the Russian republics and krais of the North Caucasus. As part of the Russian Federation, the Northern Caucasus region is included in the North Caucasian and Southern Federal Districts and consists of Krasnodar Krai, Stavropol Krai, and the constituent republics, approximately from west to east: the Republic of Adygea, Karachay–Cherkessia, Kabardino-Balkaria, North Ossetia–Alania, Ingushetia, Chechnya, and the Republic of Dagestan.

The Kuban River is a river in the Northwest Caucasus region of European Russia. It flows mostly through Krasnodar Krai for 660 kilometres (410 mi) but also in the Karachay–Cherkess Republic, Stavropol Krai and the Republic of Adygea.

Maykop is the capital city of the Republic of Adygea in Russia, located on the right bank of the Belaya River. It borders Maykopsky District, from which it is administratively and municipally separate, to the east and south; Giaginsky District to the north, and Belorechensky District of Krasnodar Krai to the west.

Kuban Cossacks, or Kubanians, are Cossacks who live in the Kuban region of Russia. Most of the Kuban Cossacks are descendants of different major groups of Cossacks who were re-settled to the western Northern Caucasus in the late 18th century. The western part of the host was settled by the Black Sea Cossack Host who were originally the Zaporozhian Cossacks of Ukraine, from 1792. The eastern and southeastern part of the host was previously administered by the Khopyour and Kuban regiments of the Caucasus Line Cossack Host and Don Cossacks, who were re-settled from the Don from 1777.

Adyghe Autonomous Oblast was an autonomous oblast within Krasnodar Krai, Soviet Union. It existed from 1922 to 1991. 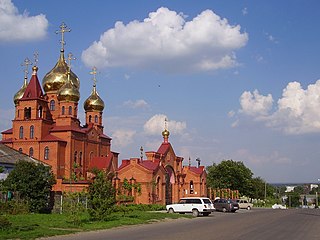 Ust-Labinsk is a town and the administrative center of Ust-Labinsky District of Krasnodar Krai, Russia. 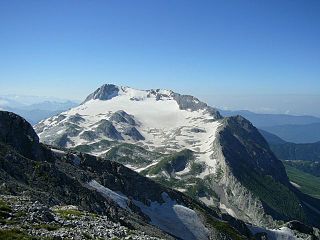 The Ukrainians in Kuban in southern Russia constitute a national minority. The region as a whole shares many linguistic, cultural and historic ties with Ukraine.

Khanskaya is a rural locality under the administrative jurisdiction of Maykop Republican Urban Okrug in the Republic of Adygea, Russia, located on the Belaya River 13 kilometers (8.1 mi) northwest of Maykop. As of the 2010 Census, its population was 11,245.

The ethnonym Adyghe is used as an endonym by the Caucasian-speaking Circassians of the North Caucasus and as a demonym for the inhabitants of the Republic of Adygea, a federal subject of Russia located in the southwestern part of European Russia, enclaved within Krasnodar Krai, where it is also rendered as Adygeans. The Adygeans speak the Adyghe language.

The Black Sea–Caspian Steppe is an informal name for that part of the Eurasian Steppe that extends south between the Black and Caspian Seas. It is usually treated as part of the Pontic–Caspian steppe which includes the area north of the Black and Caspian Seas, but there is some reason to treat it as a distinct place. Its natural boundaries are the Sea of Azov and Black Sea on the west, the Caucasus Mountains on the south and the Caspian Sea on the east. Its northern boundary may be taken as the triangle formed by the lower Don River and Volga River which are about 60 km apart to the west of Volgograd. This article excludes the north slope of the Caucasus which is not steppe and has a distinct geography and history.