listen ); Central Bavarian: Kufstoa) is a town in the Austrian state of Tyrol, the administrative seat of Kufstein District. With a population of about 19,600 it is the second largest Tyrolean town after the state capital Innsbruck. The greatest landmark is Kufstein Fortress, first mentioned in the 13th century. The town was the place of origin of the Austrian noble family Kuefstein de.

It is located in the Tyrolean Unterland region on the river Inn, at the confluence with its Weißache and Kaiserbach tributaries, near the border with Bavaria, Germany. The municipal area stretches along the Lower Inn Valley between the Brandenberg Alps in the northwest and the Kaiser Mountains in the southeast. The remote Kaisertal until recently was the last settled valley in Austria without transport connections, prior to the completion of a tunnel road from Kufstein to neighbouring Ebbs in 2008. North of the town, the Inn river leaves the Northern Limestone Alps and enters the Bavarian Alpine Foreland. The town area comprises several small lakes, such as Pfrillsee, Längsee, and Hechtsee; Egelsee and Maistaller Lacke are protected nature reserves.

The municipal arrangement comprises the cadastral communities of Kufstein, Mosbach and Thierberg; the town itself is divided into five quarters (Zentrum, Sparchen, Weissach, Endach, and Zell).

Kufstein is also home to the University of Applied Sciences Kufstein which specializes in providing business education and is a center for international exchange.

Kufstein has two exits along the A12 motorway (autobahn) from Innsbruck to Rosenheim.

Kufstein railway station, opened in 1876, forms part of the Lower Inn Valley railway section of the Brenner-axis from Munich to Verona.

The Festungsbahn is a funicular that links the city centre with the Kufstein Fortress.

Archaeological findings in the Tischofer Cave in Kaisertal denote a settlement of the area more than 30,000 years ago, the oldest traces of human habitation in Tyrol. Incorporated into the Roman Empire in 15 BC, the Inn river formed the border between the Roman provinces of Raetia and Noricum .

A church at Caofstein was first mentioned in a 788 deed issued by Bishop Arno of Salzburg. At that time, the Lower Inn Valley was part of the Bavarian realm under the Agilolfing duke Tassilo III, who was deposed by Charlemagne and replaced by Prefect Gerold. The Fortress is first documented in 1205 as a possession of the Bishop of Regensburg and the Duke of Bavaria.

In the early 14th century, the Wittelsbach emperor Louis IV, also Bavarian duke, vested the Kufstein citizens with rights of jurisdiction. Kufstein passed to the County of Tyrol in 1342, when it was a wedding gift to Countess Margaret from her husband, Emperor Louis's son Louis the Brandenburger. However, it fell back to Bavaria upon Margaret's death in 1369. Duke Stephen III of Bavaria granted Kufstein city status in 1393, due to its prominence as a trading and docking point on the Inn River. [4] From 1415 onwards, his son and successor Duke Louis VII had the Fortress largely rebuilt and expanded.

The possession of the strategically important Kufstein border fortress remained disputed. In 1504, the Habsburg emperor Maximilian I took the opportunity of the War of the Succession of Landshut within the Bavarian Wittelsbach dynasty: his Austrian forces laid siege to the town, and at the Imperial Diet in Cologne the next year, the emperor resolved upon the cession of the Kufstein territories to the Habsburg lands of Tyrol. Maximilian had the prominent Kaiserturm tower of the fortress erected, which was finished in 1522.

During the War of the Spanish Succession, the castle was again besieged by Bavarian troops under Elector Maximilian II Emanuel in 1703, nevertheless the Austrian domains were confirmed by the Treaty of Ilbersheim the next year. After the War of the Third Coalition, Kufstein once again was awarded to the newly established Kingdom of Bavaria in the 1805 Peace of Pressburg and the Tyrolean Rebellion of 1809 was crushed by the Bavarian Army. Finally in 1813/14 it passed to the Austrian Empire.

In the 19th century, Kufstein Fortress was turned into a bastille for political prisoners, such as the Hungarian outlaw Sándor Rózsa, who spent several years here before he was finally pardoned in 1868. The town's economic development was decisively promoted by the opening of the Lower Inn Valley Railway line in 1858.

In the late days of World War II the historic town centre suffered from Allied bombing. After the war, Kufstein was occupied by French and US forces; it was the site of a French sector United Nations Relief and Rehabilitation Administration Displaced Persons camp. [5]

Due to its long history, the city of Kufstein has various sights to offer:

Kufstein is twinned with

The song Kufsteinlied  [ de ] (also called Das Kufsteiner Lied), originally composed by Karl Ganzer, has been covered by many musicians including Heino and Franzl Lang. 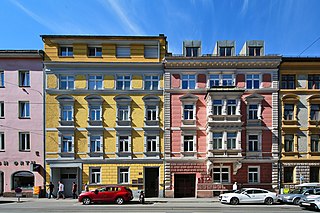 Innsbruck is the capital of Tyrol and the fifth-largest city in Austria. On the River Inn, at its junction with the Wipp Valley, which provides access to the Brenner Pass 30 km (18.6 mi) to the south, it had a population of 132,493 in 2018. 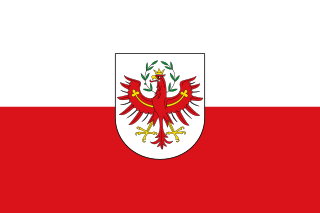 Tyrol is a state (Land) in western Austria. It comprises the Austrian part of the historical Princely County of Tyrol. It is a constituent part of the present-day Euroregion Tyrol–South Tyrol–Trentino. The capital of Tyrol is Innsbruck.

Andreas Hofer was a Tyrolean innkeeper and drover, who in 1809 became the leader of the Tyrolean Rebellion against the revolutionary Napoleonic invasion during the War of the Fifth Coalition. He was subsequently captured and executed. 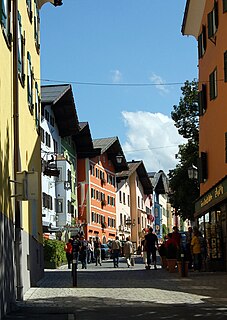 Kitzbühel is a medieval town situated in the Kitzbühel Alps along the river Kitzbüheler Ache in Tyrol, Austria, about 100 km (62 mi) east of the state capital Innsbruck and is the administrative centre of the Kitzbühel district. Kitzbühel is a ski resort of international renown and its ski season lasts from mid October to early May. During winter and early spring it is frequented primarily by upper-class clientele from Austria and from abroad. 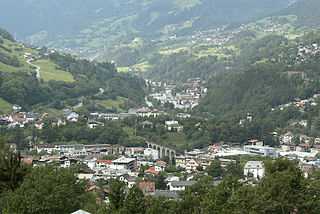 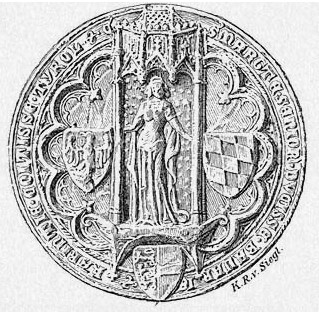 Margaret, nicknamed Margarete Maultasch, was the last Countess of Tyrol from the House of Gorizia (Meinhardiner), and an unsuccessful claimant to the Duchy of Carinthia. Upon her death, Tyrol became united with the Austrian hereditary lands of the Habsburg dynasty.

Meinhard III, a member of the House of Wittelsbach, was duke of Upper Bavaria and count of Tyrol from 1361 until his death. He was the son of Duke Louis V of Bavaria with Countess Margaret of Tyrol and as such also the last descendant of the Tyrolean branch of the House of Gorizia.

Rattenberg is a City on the Inn River in the Austrian state of Tyrol near Rattenberg mountain and Innsbruck. With just 400 inhabitants and a surface area of 10 ha, it is the smallest city in the country.

The (Princely) County of Tyrol was an estate of the Holy Roman Empire established about 1140. After 1253, it was ruled by the House of Gorizia and from 1363 by the House of Habsburg. In 1804, the county of Tyrol, unified with the secularised prince-bishoprics of Trent and Brixen, became a crown land of the Austrian Empire. From 1867, it was a Cisleithanian crown land of Austria-Hungary. 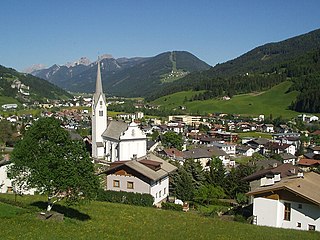 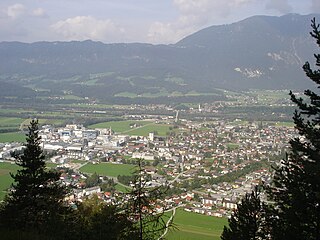 Kundl is a market town in the Kufstein district in the Austrian state of Tyrol. 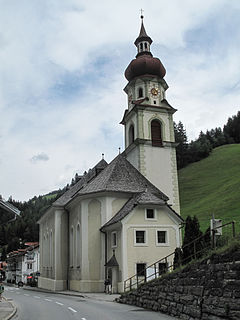 Gries am Brenner, often referred to as simply Gries, is a municipality in the Wipptal in the southern district of Innsbruck-Land. The village consists of several hamlets. 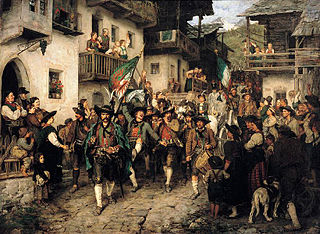 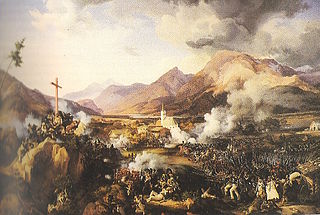 The Battle of Wörgl or Wörgel was fought on 13 May 1809, when a Bavarian force under French Marshal François Joseph Lefebvre attacked an Austrian Empire detachment commanded by Johann Gabriel Chasteler de Courcelles. The Bavarians severely defeated Chasteler's soldiers in series of actions in the Austrian towns of Wörgl, Söll, and Rattenberg. Wörgl is located 20 kilometres (12 mi) south of the modern-day German border on the upper Inn River. 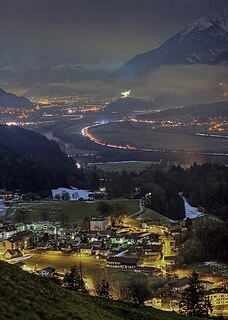 The Tyrolean Unterland is that part of the Austrian state of Tyrol east of its capital city, Innsbruck, excluding East Tyrol.

The Deutsches Eck is the name given to the shortest and most convenient road and railway link between the Austrian metropolitan region of Salzburg and the Tyrolean Unterland with the state capital Innsbruck.

Tyrol is a historical region in the Alps - in Northern Italy and western Austria. The area was historically the core of the County of Tyrol, part of the Holy Roman Empire, Austrian Empire and Austria-Hungary, from its formation in the 12th century until 1919. In 1919, following World War I and the dissolution of Austria-Hungary, it was divided into two modern administrative parts through the Treaty of Saint-Germain-en-Laye:

The Bavarian Rummel was the term used to downplay the warlike events in which Bavarian troops of Elector Maximilian II Emanuel invaded the County of Tyrol in 1703 during the War of the Spanish Succession.

Wikivoyage has a travel guide for Kufstein .
This page is based on this Wikipedia article
Text is available under the CC BY-SA 4.0 license; additional terms may apply.
Images, videos and audio are available under their respective licenses.