Kukule Ganga is a river in Sabaragamuwa Province in southwestern Sri Lanka. The Kukule Ganga Dam and reservoir lies along the river. [1]

The Sabaragamuwa Province, is one of the nine provinces of Sri Lanka, the first level administrative division of the country. The provinces have existed since the 19th century but did not have any legal status until 1987 when the 13th Amendment to the Constitution of Sri Lanka established provincial councils. The Sabaragamuwa Province contains two districts: Ratnapura and Kegalle. It is named after its former indigenous inhabitants, namely the Sabara, an indic term for hunter-gatherer tribes, a term seldom used in ancient Sri Lanka. Sabaragamuwa University is in Belihuloya.

The Kukule Ganga Dam is a 110 m (360 ft) gravity dam built across the Kukule River in the Sabaragamuwa Province of Sri Lanka. The run-of-river-type dam feeds an underground hydroelectric power station located approximately 5 kilometres (3.1 mi) away, via tunnel. 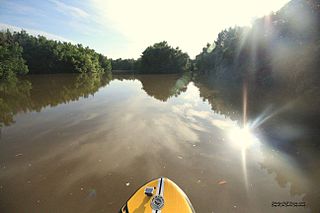 The Madu Ganga is a minor watercourse which originates near Uragasmanhandiya in the Galle District of Sri Lanka, before widening into the Madu Ganga Lake at Balapitiya. The river then flows for a further a 4.4 km (2.7 mi) before draining into the Indian Ocean.

Kalutara or Kalutota is a major city in Kalutara District, Western Province, Sri Lanka. It is also the administrative capital of Kalutara District. It is located approximately 40 km (25 mi) south of the capital Colombo. The area is well known to produce the Mangosteens, a fruit introduced from Malaysia in 19th century.

Gampola is a town located in Kandy District, Central Province, Sri Lanka, governed by an Urban Council. Gampola was made the capital of the island by King Hiran Hearth IV, who ruled for four years in the mid-fourteenth century. The last king of Gampola was King Buwanekabahu V, who ruled the island for 29 years. A separate city was built in Kotte during this time by a noble known as Alagakkonara. The longest sleeping Buddha statue in South Asia is located in the Saliyalapura Temple, Gampola.

The Kingdom of Polonnaruwa was the Sinhalese kingdom from which Sri Lankan kings ruled the island from the 11th century until 1310 CE. Pollonnaruwa was the second administrative center of Rajarata.

Ganga Addara was a 1980 Sinhalese language film directed by Sumitra Peiris and produced by Sumathi Films. The film stars Vasanthi Chathurani and late Vijaya Kumaratunga in the lead roles. Adapted from a novel by Letitia Botejue, its script was written by veteran director Tissa Abeysekara. The music and English lyrics('Banks of the River') were composed by Nimal Mendis. It was translated into Sinhala by Augustus Vinayagaratnam and was sung by Vijaya Kumaratunga, who also made his mark as a playback singer. Ganga Addara, which was the second production of Sumathi Films was set in Kandy, colonial Sri Lanka. Its plot is about a tragic love story between a boy and his uncle's daughter, where all the incidents take place around river Kalani, a famous river in Sri Lanka.

The Kelani River is a 145-kilometre-long (90 mi) river in Sri Lanka. Ranking as the fourth-longest river in the country, it stretches from the Sri Pada Mountain Range to Colombo. It flows through or bordering the Sri Lankan districts of Nuwara Eliya, Ratnapura, Kegalle, Gampaha and Colombo.The kelani river also flows through the capital of Sri Lanka,Colombo and provides 80%of its drinking water. 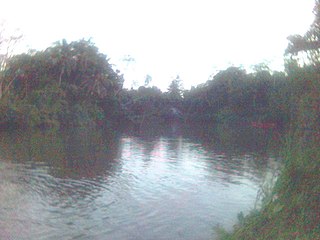 The Gin Ganga, is a 115.9 km (72 mi) long river situated in Galle District of Sri Lanka. Its water source arrives from the Gongala Mountains in Deniyaya. The Gin River flows past the villages of Baddegama, Nagoda, Thelikada and Hegoda. The Wakwella Bridge, which is the longest bridge in Sri Lanka, is built over this river. The river is also dammed at the Thelikada village. 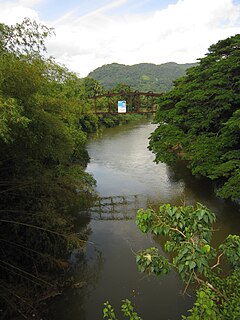 Kalu Ganga is a river in Sri Lanka. Measuring 129 km (80 mi) in length, the river originates from Sri Paadhaya and reach the sea at Kalutara. The Black River flows through the Ratnapura and the Kalutara District and pass the city Ratnapura. The mountainous forests in the Central Province and the Sinharaja Forest Reserve are the main sources of water for the river.

The electricity sector in Sri Lanka has a national grid which is primarily powered by hydro power and thermal heat, with sources such as photovoltaics and wind power in early stages of deployment. Although potential sites are being identified, other power sources such as geothermal, nuclear, peat, solar thermal and wave power are not used in the power generation process for the national grid.

The Verugal Aru, literally "flood" or "that which overflows"; is a river in Sri Lanka that separates the Trincomalee and Batticaloa Districts. The famous Verugal Kandaswamy Temple lies on its banks. It flows through Verugal town, just north of Kathiraveli. The river reaches the Indian ocean on the eastern coast of the island just south of Trincomalee. The river also feeds the Ullackalie Lagoon.

Baduraliya is a town in the Kalutara District in Sri Lanka. It is approximately 82 km from Colombo and 58 km from Rathnapura. Baduraliya was named after a rally against taxes. "Badu" in Sinhala means taxes and “raliya” means a rally. Baduraliya is surrounded by tea plantations and rubber estates, and it is at an altitude of 27 meters above sea level.