Kurt Benirschke (May 26, 1924 – September 10, 2018) was a German-American pathologist, geneticist and expert on the placenta and reproduction in humans and myriad mammalian species. At the San Diego Zoo, he created the world's first frozen zoo for the cryopreservation of genetic material from endangered species.

Benirschke grew up in Glückstadt, a small town in northern Germany. He received his M.D. degree from the University of Hamburg in 1948. He immigrated to the United States in 1949. [1]

After an internship in New Jersey, he trained in pathology at university hospitals affiliated with Harvard Medical School in Boston. In 1955, he became pathologist of the Boston Lying-in Hospital, now part of the Brigham and Women's Hospital, and there developed his interest in the placenta and reproductive problems.

From 1960 to 1970 he was the chairman of the department of pathology at Dartmouth Medical School in Hanover, New Hampshire, and pursued his interests in placental pathology and comparative reproductive pathology. There, he developed a passion for comparative cytogenetics, discovering the reason for the sterility of mules and investigating twinning in armadillos and marmosets.

In 1970, Benirschke moved west to participate in the development of a new medical school of the University of California, San Diego (UCSD). He established a genetics laboratory and ran the autopsy service at UCSD. He also chaired the department of pathology for two years.

In 1976, Benirschke persuaded the Board of Trustees of the San Diego Zoo to establish a formal research department. Benirschke led this new research department, which was named the Center for the Reproduction of Endangered Species, until 1987 when he became a member of the Zoo's Board of Trustees. He set up a laboratory at the Zoo to study the chromosomes of mammals, particularly aspects relating to reproduction and evolution. In collaboration with T.C. Hsu, he published an Atlas of Mammalian Chromosomes which presented the karyotypes of 400 different species of mammals.

He established at the Zoo a collection of frozen cells and reproductive material from dozens of highly endangered species that became famous as the first "Frozen Zoo". [2] In the 1970s when he began this collection, there was no technology available to make use of it, but he quoted Daniel Boorstin: "You must collect things for reasons you don't yet understand." The Frozen Zoo eventually became a priceless genetic resource. [3]

Throughout his career, he moved freely back and forth between human medicine and animal medicine. This inspired the title One Medicine given to a Festschrift written by 50 of his colleagues to honor his 60th birthday. In the introduction, O. A. Ryder and M. L. Byrd state, "The acknowledgment that the underlying mechanisms of cellular function and organismal development are highly similar among animals provides the impetus for the title of this volume, One Medicine. It is a tribute to Prof. Kurt Benirschke from his students and colleagues. As such, we attempt to recognize the breadth and depth of his thinking and to acknowledge the significant role he has played in aspects of human medicine, veterinary medicine, and wildlife conservation." [4]

In 1994, he was elected a fellow of the American Academy of Arts and Sciences. [5] The same year, he retired from the faculty at UCSD. From 1997-2000 he was president of the Zoo's Board of Trustees and looked after the "Proyecto Tagua" in Paraguay, a breeding facility of the newly discovered species of peccary. His text (with Peter Kaufmann) on Human Placental Pathology is the standard text on the subject. In 2008 he was one of the founders of the Center for Academic Research and Training in Anthropogeny (CARTA), an interdisciplinary research group based at UCSD and devoted to the study of human origins. [1] [6]

Benirschke was a member of many societies and authored 30 books and 510 scientific publications. He was described as a "visionary" and a "Renaissance physician". [1]

He met his wife Marion, a nurse, during his internship. They were married for 66 years at the time of his death and had three children, two sons and a daughter. One son, Dr. Stephen Benirschke, lives in Seattle and is a foot and ankle orthopedic surgeon best known for his specialty with the calcaneus fracture surgery. His other son, Rolf Benirschke, is a retired placekicker for the San Diego Chargers of the National Football League. His daughter Ingrid Benirschke-Perkins is the community relations director for CARTA. [1] 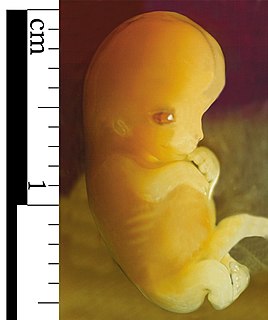 An embryo is the early stage of development of a multicellular organism. In general, in organisms that reproduce sexually, embryonic development is the part of the life cycle that begins just after fertilization and continues through the formation of body structures, such as tissues and organs. Each embryo starts development as a zygote, a single cell resulting from the fusion of gametes. In the first stages of embryonic development, a single-celled zygote undergoes many rapid cell divisions, called cleavage, to form a blastula, which looks similar to a ball of cells. Next, the cells in a blastula-stage embryo start rearranging themselves into layers in a process called gastrulation. These layers will each give rise to different parts of the developing multicellular organism, such as the nervous system, connective tissue, and organs. 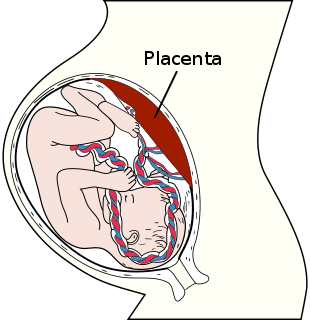 The placenta is a temporary fetal organ that begins developing from the blastocyst shortly after implantation. It plays critical roles in facilitating nutrient, gas and waste exchange between the physically separate maternal and fetal circulations, and is an important endocrine organ producing hormones that regulate both maternal and fetal physiology during pregnancy. The placenta connects to the fetus via the umbilical cord, and on the opposite aspect to the maternal uterus in a species dependent manner. In humans, a thin layer of maternal decidual (endometrial) tissue comes away with the placenta when it is expelled from the uterus following birth. Placentas are a defining characteristic of placental mammals, but are also found in marsupials and some non-mammals with varying levels of development. 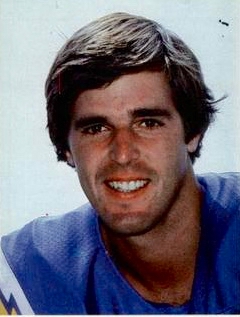 Rolf Joachim Benirschke is an American former professional football player who was a placekicker in the National Football League (NFL). He played for the San Diego Chargers from 1977 until 1986. 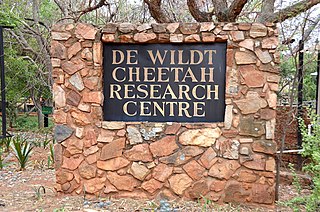 Captive breeding, also known as "captive propagation", is the process of maintaining plants or animals in controlled environments, such as wildlife reserves, zoos, botanic gardens, and other conservation facilities. It is sometimes employed to help species that are being threatened by human activities such as habitat loss, fragmentation, over hunting or fishing, pollution, predation, disease, and parasitism. In some cases a captive breeding program can save a species from extinction, but for success, breeders must consider many factors—including genetic, ecological, behavioral, and ethical issues. Most successful attempts involve the cooperation and coordination of many institutions.

Robert Hermes, DVM, Ph.D.(born November 15, 1969 in Celle, Germany) is a veterinarian researcher at The Leibniz-Institute of Zoo and Wildlife Research in Berlin. He studied veterinary medicine at the Freie Universität Berlin. He completed a Ph.D. in reproductive management.

A frozen zoo is a storage facility in which genetic materials taken from animals are stored at very low temperatures (−196 °C) in tanks of liquid nitrogen. Material preserved in this way can be stored indefinitely and used for artificial insemination, in vitro fertilisation, embryo transfer, and cloning. Some facilities also collect and cryopreserve plant material.

The uterine vein is a vein of the uterus in women. It is found in the cardinal ligament. It drains into the internal iliac vein. It follows a similar course to the uterine artery. It helps to drain blood from the uterus, and removes waste from blood in the placenta during pregnancy.

The Herpesvirales is an order of dsDNA viruses with animal hosts, characterised by a common morphology consisting of an icosahedral capsid enclosed in a glycoprotein-containing lipid envelope. Common infections in humans caused by members of this order include cold sores, genital herpes, chickenpox, shingles, and glandular fever. Herpesvirales is the sole order in the class Herviviricetes, which is the sole class in the phylum Peploviricota.

The Center for Academic Research and Training in Anthropogeny (CARTA) is an Organized Research Unit (ORU) at the University of California, San Diego. Formally established in 2008, CARTA is a collaboration between faculty members of UCSD main campus, the UCSD School of Medicine, the Salk Institute for Biological Studies, and interested scientists at other institutions from around the world. 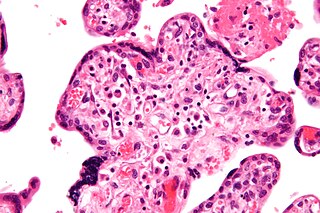 Villitis of unknown etiology (VUE), also known as chronic villitis, is a placental injury. VUE is an inflammatory condition involving the chorionic villi. VUE is a recurrent condition and can be associated with intrauterine growth restriction (IUGR). IUGR involves the poor growth of the foetus, stillbirth, miscarriage, and premature delivery. VUE recurs in about 1/3 of subsequent pregnancies. 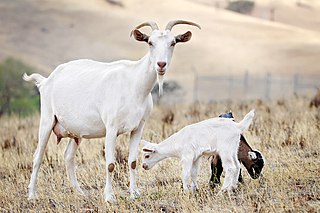 William A. Wimsatt was professor of Zoology and Chairman of the Department of Zoology at Cornell University. From 1945 until 1960, Wimsatt taught courses in histology and embryology in the College of Arts and Sciences and also in the New York State College of Veterinary Medicine. He was well known for his pioneering research on the interrelationships of hibernation and reproduction and the biology of bats.

Loon was a drill in the San Diego Zoo. He was trained to accept regular blood sampling and insulin injection in order to treat his diabetes mellitus.

The placental microbiome is the nonpathogenic, commensal bacteria claimed to be present in a healthy human placenta and is distinct from bacteria that cause infection and preterm birth in chorioamnionitis. Until recently, the healthy placenta was considered to be a sterile organ but now genera and species have been identified that reside in the basal layer.

Elizabeth Mapelsden Ramsey, M.D. was an American physician, placentologist, and embryologist known for pioneering the study of early human embryos and the structure and circulatory system of the placenta. She was a researcher at the Carnegie Institution of Washington for nearly forty years. While performing an autopsy in 1934, she discovered a 14-day-old human embryo, the earliest yet studied at the time. Later in her career, Dr. Ramsey worked on a team that used cineradiology to reveal the workings of the placental circulatory system in primates. 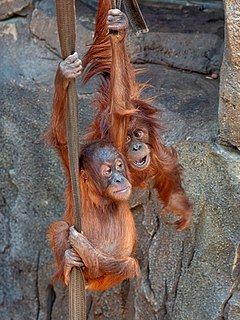 Karen, is a Sumatran orangutan, who on 27 August 1994 at San Diego Zoo was the first orangutan to have open heart surgery and in 2021 was among the first non-humans to receive a vaccine for COVID-19.