The Kurtiformes consist of two extant families of ray-finned fish, the Indo-Pacific Kurtidae (consisting solely of the two species of nursery fish) and the much more diverse and widespread Apogonidae (the cardinalfishes). The order is part of the Percomorpha clade and is regarded by many authorities as a sister taxon to the Gobiiformes.

A close relationship between the Kurtidae and Apogonidae was postulated based on the similarity of constituent parts of their dorsal gill arches and that in both groups the eggs have filaments on the micropyle, which enable the eggs to form a mass. This mass is brooded in the mouth in the Apogonidae and borne on the supraoccipital hook of at least one of the two nursury fishes in the Kurtidae. They also have horizontal and vertical rows of sensory papillae on their heads and bodies, which are often arranged in a pattern resembling a grid (similar patterns of sensory papillae can be observed in some species in the Gobiiformes). The two families comprising the Kurtiformes are recovered as sister groups in some molecular phylogenies, but others instead recover them as successive sisters to the Gobiiformes. [2]

Two extant families are classified under the order Kurtiformes: [3]

Actinopterygii, members of which are known as ray-finned fishes, is a class or subclass of the bony fishes. 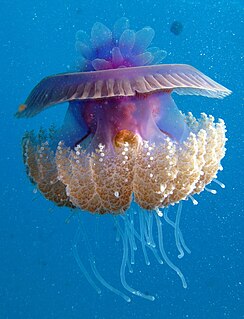 The Scyphozoa are an exclusively marine class of the phylum Cnidaria, referred to as the true jellyfish. It may include the extinct fossil group the Conulariida, whose affinities are uncertain and widely debated. 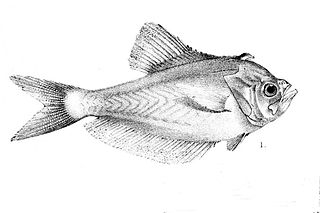 Kurtus is a genus of percomorph fishes, called the nurseryfishes, forehead brooders, or incubator fish, native to fresh, brackish and coastal marine waters ranging from India, through southeast Asia to New Guinea and northern Australia. Kurtus is currently the only known genus in the family Kurtidae, one of two families in the order Kurtiformes. They are famous for carrying their egg clusters on hooks protruding from the forehead (supraoccipital) of the males, although this only has been documented in K. gulliveri and available evidence strongly suggests this is not done by K. indicus. Females do not have a hook.

Mouthbrooding, also known as oral incubation and buccal incubation, is the care given by some groups of animals to their offspring by holding them in the mouth of the parent for extended periods of time. Although mouthbrooding is performed by a variety of different animals, such as the Darwin's frog, fishes are by far the most diverse mouthbrooders. Mouthbrooding has evolved independently in several different families of fish. 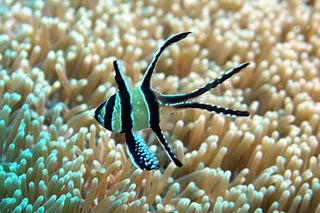 The Banggai cardinalfish is a small tropical cardinalfish in the family Apogonidae. It is the only member of its genus. This attractive fish is popular in the aquarium trade. It is among the relatively few marine fish to have been bred regularly in captivity, but significant numbers are still captured in the wild and it is now an endangered species.

Milyeringa veritas is a species of fish in the family Milyeringidae. It is endemic to groundwater and anchialine systems in caves in the Cape Range, Australia. Like other cave-adapted fish, the blind gudgeon is entirely blind and lacks pigmentation, using sensory papillae on its head and body to move around and find food. It has a reduced number of scales on its body and the head is almost scaleless. It reaches a standard length of 5 cm (2.0 in). It is listed as vulnerable under the Australian Environment Protection and Biodiversity Conservation Act 1999. It is an omnivorous species which feeds on feeds on algae and possibly also detritus, as well as invertebrates. Invertebrates consumed by M. veritas include Stygiocaris sp., aquatic insect larvae such as those of caddis flies and non aquatic invertebrates which accidentally fall into the water such as isopods, ants and cockroaches. When the gut contents have been sampled 10% of the identifiable gut contents were Stygiocaris and 70% were terrestrial species, despite this species being restricted to caves. They are often observed hanging still in the water column or resting on ledges in the cave walls, behaviours which they also display when kept in aquaria, but can move quickly to avoid capture if threatened, for example when catching them with a net is attempted. The generic name is taken from Milyering which is 20 miles (32 km) southwest of Vlamingh Head in the North West Cape of Western Australia, the type locality, and the specific name is Latin veritas meaning truth an allusion to a quote attributed to the Ancient Greek philosopher Democritus "Truth lies at the bottom of a well, the depth of which, alas! gives but little hope of release.”

Ostorhinchus hoevenii is a species of ray-finned fish from the family Apogonidae, the cardinalfishes, it is from the Indo-West Pacific north to Japan and south to Australia. It occasionally makes its way into the aquarium trade. It grows to a size of 6 cm in length. It occurs in small groups among corals, sea urchins, crinoids and algae. The specific name honours the Dutch zoologist Jan van der Hoeven (1801-1868).

Vincentia is a genus of cardinalfishes native to the eastern Indian Ocean and the southwestern Pacific Ocean. The generic name refers to Gulf St Vincent in South Australia, where the type specimen of V. waterhousii was collected. 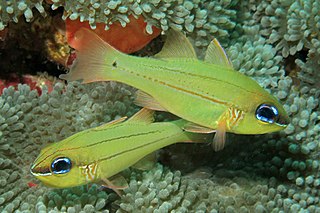 Ostorhinchus sealei, Seale's cardinalfish or the cheek-barred cardinalfish, is a species of ray-finned fish, a cardinalfish, from the family Apogonidae. It is an Indo-Pacific species which ranges from Malaysia east to the Solomon Islands, north to southern Japan and south to northwestern Australia, as well as Palau in Micronesia. It is an uncommon species which occurs among branching corals in the sheltered lagoons protected by reefs. It can be found in small to large aggregations low in the water over the reef. It is infrequent below depths of 10 metres (33 ft). They are mouthbrooders which form pairs to mate. During the day thse fish shelter in the reef and they emerge at night to feed on zooplankton and benthic invertebrates. The specific name honours the American ichthyologist Alvin Seale (1871-1958).

Fowleria is a genus of fishes in the family Apogonidae native to the Indian and Pacific Oceans. The name of this genus honors the American ichthyologist Henry Weed Fowler ( ) of the Academy of Natural Sciences of Philadelphia, who attended Stanford University, where he was a student of David Starr Jordan's.

Lachneratus phasmaticus, also known as the phantom cardinalfish, is a species of fish in the family Apogonidae, the cardinalfishes. It is the only member of its genus. It is native to the tropical eastern Pacific and Indian Oceans. This fish can be found in crevices and underwater caves, and it occurs at depths of 3 to 104 m. It grows to a standard length of 7.4 cm (2.9 in).

Ostorhinchus capricornis, also known as the Capricorn cardinalfish, is a species of ray-finned fish, a cardinalfish from the family Apogonidae which occurs around reefs in the western Pacific Ocean. 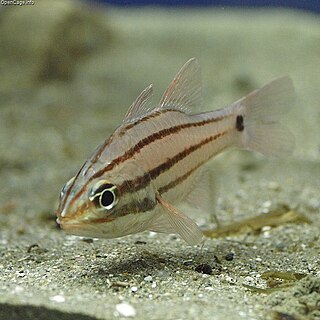 Ostorhinchus doederleini is a species of fish in the cardinalfish family, also known by the common names Doederlein's cardinalfish and fourline cardinalfish. In Japanese it is called osuji-ishimochi. It is native to subtropical regions of the western Pacific Ocean, its distribution extending from Japan to Taiwan and Australia to New Caledonia and the Kermadec Islands.

Milyeringa justitia, commonly known as the Barrow cave gudgeon, is a species of fish in the family Milyeringidae endemic to groundwater systems (aquifers) of Barrow Island, around 50 km off the Pilbara coast in Western Australia. This troglobitic species has a pale body, lacking in pigment, and it is eyeless and blind, using sensory papillae located on the head and body to allow it to feed and move around in total darkness. The specific name justitia is Latin for "justice" and was given by the describers to complement the specific name of Milyeringa veritas which means "truth" in the hope that “As truth and justice are supposed to go together, we name this species justitia, from the Latin for justice, in the hope that justice helps the species to survive on Barrow Island, which has been an oilfield since 1967 and is most recently the site of the Gorgon Gas Hub development.” Very little is known about M. justitia as between 2002 and 2013 only six specimens were collected but its biology is assumed to be similar to that of M. veritas.

Jaydia queketti, the spotfin cardinal or signal cardinalfish, is a species of ray-finned fish from the Indian Ocean, it is a member of the family Apogonidae. It has colonised the eastern Mediterranean Sea by way of the Suez Canal since 2004.

Jaydia smithi, Smith's cardinalfish, is a species of ray-finned fish from the Indian and Pacific Oceans, a member of the family Apogonidae. It has colonised the eastern Mediterranean Sea by way of the Suez Canal since 2007. 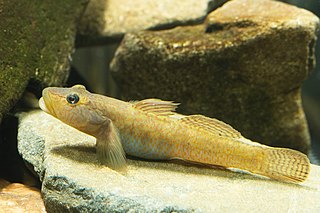