Kuse Station(久世駅,Kuse-eki) is a train station in the city of Maniwa, Okayama Prefecture, Japan.

Hokubō was a town located in Jōbō District, Okayama, Japan.

Maniwa is a district located in Okayama Prefecture, Japan.

Kuse is a district located in Kyoto Prefecture, Japan.

Chō Kuse ni Narisō is a Japanese manga series written by An Yoshimura and illustrated by Yayoi Nakano. The series tells the story of an idol singer/martial artist and the chaos that results from her efforts to have a life and love beyond her singing career. An anime adaptation by Studio Kikan aired as part of the anthology program Eisei Anime Gekijō which was broadcast on NHK.

Nexton is a Japanese software company specializing in the publishing and distribution of adult visual novel video games for twelve game developers that Nexton is partners with. The company is located in Osaka, Japan. The current president, Akihiko Suzuki has served as the chief director of the Ethics Organization of Computer Software.

Gianism Best Ofs consists of four best of albums released by Nightmare. The tracks on Gianism ~omae no mono wa ore no mono and Gianism ~Ore no mono wa ore no mono (ジャイアニズム〜俺の物は俺の物〜) are songs from the band's 'indies' era; they performed these songs during their earlier tours. These two albums were also released as a limited edition double album. The album Gianism ~Nightmare no Kuse ni Namaikidazo~, consists of their best of songs after they went major.

IBM Yamato Facility located in the city of Yamato, Kanagawa Prefecture, Japan, is where IBM's research and development activities are done for IBM's worldwide and Asia-Pacific region market. Its buildings were designed by the architecture firm of Nikken Sekkei Ltd. and completed in 1985. In July, 2012, all IBM research and development functions completed moving to IBM Toyosu Facility, Tokyo. The last IBM-related organizations left Yamoto around September, 2012, and the facility is no longer associated with IBM.

What Did I Do To Deserve This, My Lord? is a real-time strategy game for the PlayStation Portable. The game centers on creating mazes and monsters to help defend a demon lord from heroes seeking to capture him.

Night Raid 1931, is a Japanese anime television series produced by A-1 Pictures and Aniplex and directed by Atsushi Matsumoto. The 13-episode anime aired in Japan on the TV Tokyo television network starting April 5, 2010. Senkō no Night Raid is the second project of Anime no Chikara. Sentai Filmworks acquired the series and released it on Blu-ray and DVD in August 2011. Sentai Filmworks' license for the series later expired in 2018. 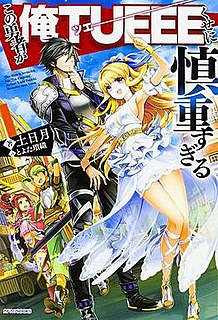 The Hero is Overpowered but Overly Cautious is a Japanese light novel series written by Light Tuchihi and illustrated by Saori Toyota. It began serialization online in June 2016 on the Kadokawa's novel publishing website Kakuyomu. It was then acquired by Kadokawa Shoten, who published the first light novel volume in February 2017 under their Kadokawa Books imprint. Five volumes have been released as of November 2018. The light novel series has been licensed in North America by Yen Press. A manga adaptation with art by Koyuki has been serialized in Fujimi Shobo's shōnen manga magazine Monthly Dragon Age since November 9, 2018. It has been collected in a single tankōbon volume. An anime television series adaptation by White Fox will premiere in October 2019.