Kusŏng (Korean pronunciation:  [ku.sʌŋ] ) is a city in central North Pyongan province, North Korea. It borders Taegwan to the north, Taechon to the east, Kwaksan and Chongju to the south, and Chonma to the west. The highest point is Chongryongsan (청룡산, 920 m). The year-round average temperature is 8.2 °C, with a January average of -9.6 °C and an August average of 23.3 °C. 1300 millimeters of rain fall in a typical year. 22% of the county's area is cultivated; 64% is forested.

Kusong is also home to much of North Korea's military industry, with both munitions factories and uranium mines in the area. [1] The No.112, also known as the January 12th Factory was the site of the first successful Hwasong-12 launch, with a memorial dedicated to the successful launch nearby. [2]

The Panghyon airfield is also located by Kusong, [3] which is a site of missile test launches, including the first successful ICBM test launch by the DPRK. [3]

Kusong is home to the Machine Plant managed by Ho Chol Yong, a large factory that produces tracked vehicles and tanks. This factory saw multiple extensions to it in 2016 and 2020. The factories' expansion is reflected on the increasing use of tracked transporter erector launchers. [4]

The city is divided into 25 neighborhoods (dong) and 18 villages (ri).

North Korea has a military nuclear weapons program and, as of early 2020, is estimated to have an arsenal of approximately 30 to 40 nuclear weapons and sufficient production of fissile material for six to seven nuclear weapons per year. North Korea has also stockpiled a significant quantity of chemical and biological weapons. In 2003, North Korea withdrew from the Treaty on the Non-Proliferation of Nuclear Weapons (NPT). Since 2006, the country has been conducting a series of six nuclear tests at increasing levels of expertise, prompting the imposition of sanctions. 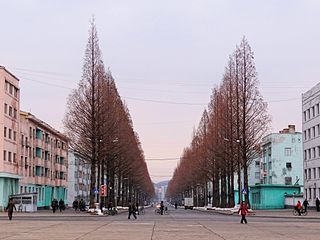 Pyongsong is a city in North Korea, the capital city of South Pyongan province in western North Korea. The city is located about 32 kilometres northeast of Pyongyang, and was formally established in December 1969. It has a population of 284,386. 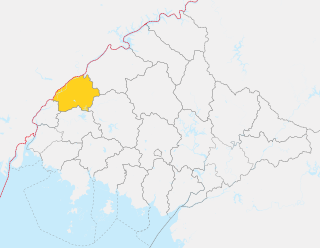 Sinpho is a port city on the coast of the Sea of Japan in central South Hamgyŏng province, North Korea. According to the last available census, approximately 152,759 people reside there. 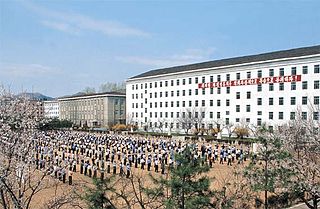 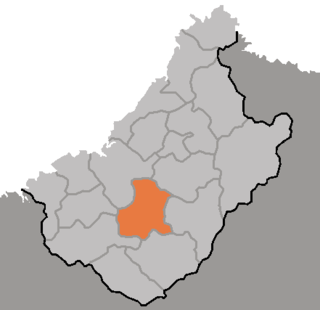 Taegwan County is a kun, or county, in northeastern North P'yŏngan province, North Korea. It lies in the province's interior, and is bounded by Tongch'ang on the east, Kusŏng and T'aech'ŏn to the south, Ch'ŏnma to the west, and Ch'angsŏng and Sakchu to the north. It was created in 1952 from portions of Sakchu county. 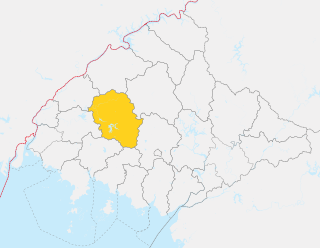 Sŏnch'ŏn County is a kun, or county, on the coast of the Yellow Sea in west-central North P'yŏngan province, North Korea. To the north it borders Ch'ŏnma, to the east Kusŏng and Kwaksan, and to the west Tongrim; to the south, it borders nothing but the sea. Sŏnch'ŏn was reorganized in 1952, with two myŏn, or townships, being split off to form the new county of Tongrim. 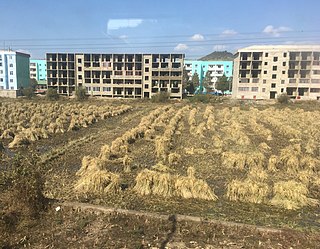 Kwaksan County is a kun in coastal southern North P'yŏngan province, North Korea. It faces the Yellow Sea to the south. By land, it is bordered by Kusŏng city in the north, Chŏngju in the east, and Sŏnch'ŏn in the west.

Sakju County is a kun, or county, in northern part of North P'yŏngan province, in North Korea. It lies along the Yalu River bordering the People's Republic of China to the north. Within North Korea, it borders Ch'angsŏng to the east, Ch'ŏnma and Taegwan to the south, and Ŭiju to the west.

Pukchang Airport is an airport in Pyongan-namdo, North Korea. It serves as the military airfield for the nearby city of Sunchon. 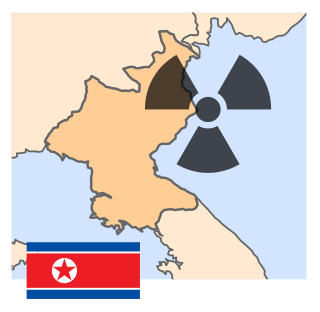 Throughout 2017, 17 missile tests were conducted by North Korea. These tests ranged in success, and included first tests of the DPRK's new missile, the Hwasong-12, which was the most-tested missile type over the course of the year. 2017's missile tests are especially notable due to the several instances of North Korean missiles passing over Japan, provoking a response from the Japanese government, as well as the test of an ICBM, the range of which prompted an Emergency Debate of the UN Security Council.

The Hwasong-14, also known under alternative US designation codename KN-20, is a mobile intercontinental ballistic missile developed by North Korea. It had its maiden flight on 4 July 2017, which coincided with the United States' Independence Day. North Korea is the only known operator of this missile.