The Kuwaiti Federation Cup is a competition organised by the Kuwait Football Association, the Kuwaiti version of a League cup and has been played in its current format every year since 2008.

The first edition of the Federation Cup however was played in the 1969-70 season, although not much is known about the competition in the early years. The competition is for senior teams playing in the top tier Kuwaiti Premier League, although the 2015–16 edition saw Burgan enter to gain much needed practice before they enter the top flight.

The cup competition is predominantly played during international breaks (Group stage) and after league match days. the Tournament was abolished at the end of 2015-16 season later returned in 2017-18.

The GCC Champions League, formerly known as the Gulf Cup for Clubs, was an annually organized football league tournament for clubs of the Arabian peninsula. The tournament was first organized in 1982 and was last played in 2015, the 31st edition. Attempts to play the 2016 and 2017 editions failed.

The Kuwait Premier League, known as STC Premier League due to sponsorship reasons, is the top division of the Kuwait football pyramid system. Formed in 1961, Al-Arabi and Qadsia are both holds the best record in the competition, having won 17 times.

Qadsia Sporting Club is primarily an association football club. Based in Kuwait City, Qadsia is the most popular club in Kuwait. Al Qadsia was founded in 1953 and it was called Al-Jazira before being renamed to Qadsia SC on 20 October 1960. Qadsia currently plays in the Kuwait Premier League and has won the league recordable 17 times, as the top winning club in the league.

Kuwait Sporting Club is a Kuwaiti professional football and basketball club based in Kuwait City. The football team has won the Kuwaiti Premier League 15 times, with the most recent one coming in 2018–19. Kuwait SC also have 47 trophies to their name in Kuwaiti Club football history. Kuwait SC plays in the Al Kuwait Sports Club Stadium, in Kaifan, which is the 5th largest stadium in Kuwait. Kuwait SC is the first Kuwaiti club to ever win an Asian title that is, the AFC Cup in 2009, 2012, 2013. Kuwait SC is also one of the first sports club to have been established in Kuwait .

Firas Mohamad Al Khatib is a Syrian former footballer who mainly played as a forward. He is the Syria national team all-time top goalscorer, with 36 goals. 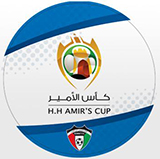 The Crown Prince Cup was the Saudi Arabian annual cup competition. It was the oldest domestic football competition in Saudi Arabia, its first edition was held in 1956–57, but was not crowned from 1975 until 1990. The competition consists of teams from the top two tiers of Saudi league football, as well as the competition runs from August until February.

The Crown Prince Cup is a Kuwaiti domestic annual football competition created in 1994.

Khaled Ahmad Khalaf Matar is a Kuwaiti footballer who plays in Attack for Kuwaiti Premier League club Al Arabi and the Kuwait national football team with his brothers in Al-Arabi Khalaf Ahmed Khalaf and Ali Khalaf.

Ali Maqseed is a Kuwaiti football midfielder. He plays left back or left wing with many other positions for Al Arabi SC in VIVA Premier League and the Kuwait national football team.

The Qatari Stars Cup is a Qatari football competition played during the Qatar Stars League season known as Ooredoo Cup due to sponsorship reasons.

The 2015 AFC Cup was the 12th edition of the AFC Cup, Asia's secondary club football tournament organized by the Asian Football Confederation (AFC).

Burgan Sports Club is one of the newer established sporting clubs in Kuwait, with Al-Qurain SC and has been registered to compete in Kuwait Football Association's domestic competition, the VIVA Premier League, Kuwait Emir Cup, Kuwait Crown Prince Cup, Kuwait Super Cup and Kuwait Federation Cup starting from the 2014–15 official football season. It is based in Al Farwaniyah.

The 2014-15 Kuwaiti Premier League season was the 53rd season of the Kuwait Premier League, Kuwait's highest football league. The season saw 14 teams compete, with Kuwait SC being crowned as champions with an undefeated 20-6-0 record. Patrick Fabiano led the league with 22 goals.

54th edition of the tournament will feature 15 teams including Burgan SC for the first time.

57th edition of the tournament. Kuwait SC are the defending champions. Originally the league was structured at 8 teams but Kuwait FA announced its expansion in football so last seasons 2017–18 relegated team have been un-relegated and 2017–18 Kuwaiti Division One winners Al-Shabab SC and losing play-off team Al-Fahaheel FC will all compete this season.