Kuwana is located in northern Mie Prefecture, facing the Pacific Ocean. It is located at the mouth of Kiso Three Rivers dividing Mie and Aichi Prefectures, the city has functioned as a regional center of fishing, industry, business, and culture.

During the late Heian period and Muromachi period, the area of modern Kuwana was known as Juraku-no-tsu (十楽の津) and was a major seaport on the east coast of Japan, controlled by a guild of merchants. The poet Socho described it in 1515 as a major city with over a thousand houses, temples and inns. During the Sengoku period, the area came under the control of the warlord Oda Nobunaga. The Sieges of Nagashima took place in 1571, 1573 and 1574, finally resulting in the destruction of the Ikkō-ikki by Nobunaga's forces.

After Nobunaga's death, the area came under the control of Toyotomi Hideyoshi, who initially installed Nobunaga's younger son Oda Nobukatsu as ruler as all of Ise Province. However, following the Battle of Odawara, Hideyoshi demoted Oda Nobukatsu, divided Ise Province into several domains, was assigned to Ujiie Yukihiro as a 22,000 koku domain in 1595. Ujiie Yukihiro sided with the pro-Toyotomi armies in the Battle of Sekigahara and was dispossessed by Tokugawa Ieyasu.

In January 1601, one of Ieyasu's main generals, Honda Tadakatsu was installed as daimyō of Kuwana Domain, with revenues of 150,000 koku. The Tokugawa Shogunate recognized the strategic value of the location as both a seaport, and also as Kuwana-juku, as the forty-second post station on the vital Tōkaidō highway connecting Edo with Kyoto. Some travelers along the road would take ships and boats across Ise Bay from Miya-juku (located in present-day Nagoya near Atsuta Shrine) to Kuwana, which reportedly made the journey more enjoyable. The trip across the Ise Bay, which took a whole day, made Kuwana a necessary stop for most of the travelers, benefiting the city's numerous inns and restaurants which served fresh sea food. Kuwana was especially known for its clams.

In 1609, Honda Tadakatsu was succeeded by his son Honda Tadamasa, who distinguished himself at the Siege of Osaka and was rewarded with a transfer to the more lucrative Himeji Domain in 1617.The strategic Kuwana Domain was then assigned to Ieyasu's half-brother, Hisamatsu Sadakatsu, whose descendants ruled until they were transferred to Takada Domain in Echigo Province in 1710, and their place taken by the Okudaira branch of the Matsudaira clan, who ruled to 1823, when a branch of the Hisamatsu returned to Kuwana from Shirakawa Domain in Mutsu Province. The Hisamatsu continued to rule Kuwana until the end of the Tokugawa shogunate. Matsudaira Sadaaki, the next-to-last daimyō of Kuwana served as the last Kyoto shoshidai and supported his brother, Matsudaira Katamori, daimyō of Aizu Domain. He fought in the Boshin War, finally surrendering to the Meiji government after the fall of the Republic of Ezo.

With the abolition of the han system in July 1871 after the Meiji restoration, Kuwana Domain became “Kuwana Prefecture”, and later became Kuwana District within Mie Prefecture.

The area re-established itself as a regional commercial center and was noted for its metal casting industry. Kuwana Town was established in April 1889. The modern city was founded on April 1, 1937, as a result of a merger between existing towns and villages in the area. The city was devastated by Allied air raids on July 17 and July 24, 1945, during World War II, which destroyed some 90% of its urban area.

Portions of the city were heavily damaged in 1959 by the Isewan Typhoon.

On December 6, 2004, old Kuwana city, the towns of Nagashima and Tado (both from Kuwana District) were merged into new and expanded city of Kuwana.

Today, the city functions as a bed town for nearby Nagoya and Yokkaichi. A large housing estate called Ōyamada (大山田) is located west of central Kuwana.

Oda Nobunaga was a Japanese daimyō and one of the leading figures of the Sengoku period. He is regarded as the first "Great Unifier" of Japan. 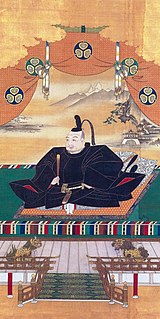 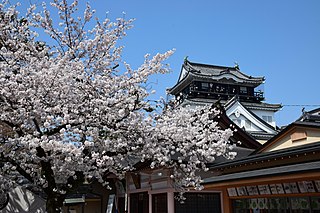 Okazaki Castle is a Japanese castle located in Okazaki, Aichi Prefecture, Japan. At the end of the Edo period, Okazaki Castle was home to the Honda clan, daimyō of Okazaki Domain, but the castle is better known for its association with Tokugawa Ieyasu and the Tokugawa clan. The castle was also known as "Tatsu-jō " (龍城).

Tokuhime (徳姫), also known as Gotokuhime (五徳姫) or Lady Toku was a Japanese noble lady from the Sengoku period. She was the daughter of daimyō Oda Nobunaga and later married Matsudaira Nobuyasu, the first son of Tokugawa Ieyasu. She is remembered as the person most responsible for the deaths of Nobuyasu and his mother, Ieyasu's wife, the Lady Tsukiyama. 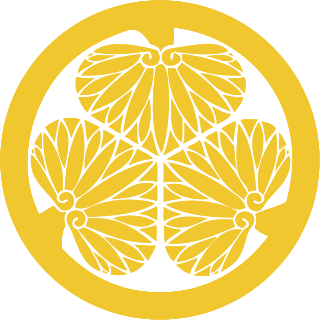 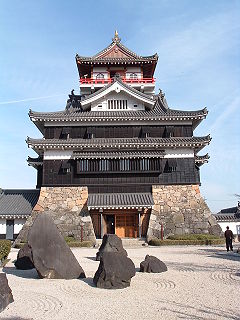 Kiyosu Castle is a Japanese castle located in Kiyosu, eastern Aichi Prefecture, Japan. It is noted for its association with the rise to power of the Sengoku period warlord, Oda Nobunaga. The kanji in the name of the castle was written as 清須城. The current partial reconstruction dates to 1989 and was built as a centennial celebration for the modern-day city of Kiyosu. 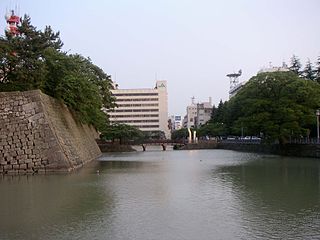 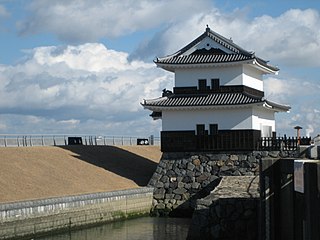 Obata Domain was a feudal domain under the Tokugawa shogunate of Edo period Japan, located in Kōzuke Province, Japan. It was centered on Obata jin'ya in what is now part of the town of Kanra, Gunma. Obata was ruled through part of its history by the Oda clan, descendants of Oda Nobunaga.

Kakegawa Domain was a feudal domain under the Tokugawa shogunate of Edo period Japan. The domain was centered at Kakegawa Castle in Tōtōmi Province, in what is now the city of Kakegawa, Shizuoka.

Ise Electric Railway, usually abbreviated as Iseden (伊勢電), was a private railway company that operated mostly in Mie Prefecture, Japan, for 25 years from 1911 to 1936, when it was absorbed by Sangū Express Electric Railway. At its height, Iseden operated three train lines, two of which it planned and built, that serviced the cities of Yokkaichi, Tsu, Suzuka, Matsusaka, Ujiyamada, and Ōgaki. Much of the infrastructure of Iseden is now owned by Kintetsu and remains in use today.

Toba Domain was a Japanese domain of the Edo period, located in Shima Province, Japan. It was centered on Toba Castle in what is now the city of Toba. 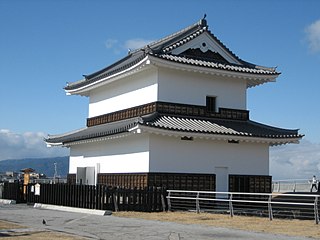