Kuyavian-Pomeranian Voivodeship, also known as Cuiavian-Pomeranian Voivodeship or simply Kujawsko-Pomorskie, [2] or Kujawy-Pomerania Province [3] (Polish : województwo kujawsko-pomorskie [vɔjɛˈvut͡stfɔ kuˈjafskɔ pɔˈmɔrskʲɛ] ) is one of the 16 voivodeships (provinces) into which Poland is divided. It was created on 1 January 1999 and is situated in mid-northern Poland, on the boundary between the two historic regions from which it takes its name: Kuyavia (Polish : Kujawy) and Pomerania (Polish : Pomorze). Its two chief cities, serving as the province's joint capitals, are Bydgoszcz and Toruń.

The Kuyavian-Pomeranian Voivodeship was created on 1 January 1999, as a result of the Polish local government reforms adopted in 1998. It consisted of territory from the former Bydgoszcz, Toruń and Włocławek Voivodeships.

The area now known as Kuyavia-Pomerania was previously divided between the region of Kuyavia and the Polish fiefdom of Royal Prussia. Of the two principal cities of today's Kuyavian-Pomeranian voivodeship, one (Bydgoszcz) was historically located in Kuyavia, whilst the other (Toruń) was an important town of Royal Prussia.

The functions of regional capital are split between Bydgoszcz and Toruń. Bydgoszcz serves as the seat of the centrally appointed governor or voivode (Polish : wojewoda), while Toruń is the seat of the elected Regional Assembly (sejmik), and of the executive elected by that assembly, headed by the voivodeship marshal (marszałek województwa).

The voivodeship contains 52 cities and towns. These are listed below in descending order of population (according to official figures for 2019 [4] ):

Transportation infrastructure is of critical importance to the voivodeship's economy. Kuyavia-Pomerania is a major node in the Polish transportation system. Railway lines from the South and East pass through Bydgoszcz to connect to the major ports on the Baltic Sea. In addition to this, Bydgoszcz is home to the rolling stock manufacturer PESA SA, Poland's largest and most modern producer of railway and tram products. The province's sole international airport, Ignacy Jan Paderewski Airport, is located in Bydgoszcz and has connections to a number of European destinations as well as Warsaw, which are all operated by either Irish carrier Ryanair or LOT Polish Airlines.

The main railway stations of the province are Bydgoszcz main station and Toruń main station; both stations are served by fast PKP Intercity trains which connect them with the capital Warsaw, as well as other major Polish cities. In addition to these fast express services, inter-regional trains are operated by the firm Przewozy Regionalne, whilst domestic rail transportation within the voivodeship is provided by Arriva RP, a private firm to which the provincial government subcontracted the provision of rail transport.

All major towns of the province have municipal transportation companies operating buses, whilst Bydgoszcz, Toruń and Grudziądz also have extensive tram systems.

The Kuyavian-Pomeranian voivodeship's government is headed by the province's voivode (governor) who is appointed by the Polish Prime Minister. The voivode is then assisted in performing his duties by the voivodeship's marshal, who is the appointed speaker for the voivodeship's executive and is elected by the sejmik (provincial assembly). The current voivode of Kuyavia-Pomerania is Ewa Monika Mes, and the present marshal is Piotr Całbecki.

The Kuyavian-Pomeranian Voivodeship is divided into 23 counties (powiats): 4 city counties and 19 land counties. These are further divided into 144 gminas.

Protected areas in Kuyavian-Pomeranian Voivodeship include the nine Landscape Parks listed below.

Pomeranian Voivodeship, Pomorskie Region, or Pomerania Province, is a voivodeship, or province, in northwestern Poland. The provincial capital is Gdańsk. 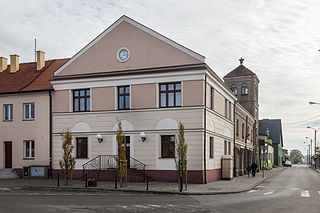 Chełmno County is a unit of territorial administration and local government (powiat) in Kuyavian-Pomeranian Voivodeship, north-central Poland. It came into being on 1 January 1999, as a result of the Polish local government reforms adopted in 1998. Its administrative seat and only town is Chełmno, which lies 40 km (25 mi) north of Toruń and 40 km (25 mi) north-east of Bydgoszcz.

The Pomeranian Voivodeship or Pomorskie Voivodeship was an administrative unit of interwar Poland. It ceased to function in September 1939, following the German and Soviet invasion of Poland.

Toruń Główny railway station is the most important railway station serving the city of Toruń, in the Kuyavian-Pomeranian Voivodeship, Poland. The station is located on the Poznań–Skandawa railway and Kutno–Piła railway. The train services are operated by PKP, Przewozy Regionalne and Arriva.

The Kuyavian-Pomeranian Regional Assembly is the regional legislature of the Voivodeship of Kuyavia-Pomerania in Poland. It is a unicameral parliamentary body consisting of thirty councillors chosen during regional elections for a five-year term. The current chairperson of the assembly is Ryszard Bober.

Romuald Kosieniak is a former Polish politician who was a 2nd Voivode of Kuyavian-Pomeranian Voivodeship (2001-2006) and Vice-Starosta of Bydgoszcz County (1998-2001). 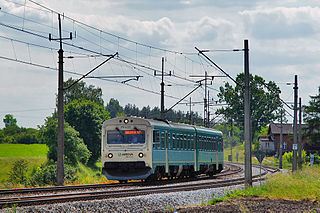 Arriva Poland Sp. z o. o. is a Polish private rail carrier providing services in the Kuyavian-Pomeranian, Masovian, Pomeranian and Warmian-Masurian voivodships. It is a subsidiary of Arriva.

Toruń is a Polish parliamentary constituency in the Kuyavian-Pomeranian Voivodeship. It elects thirteen members of the Sejm. 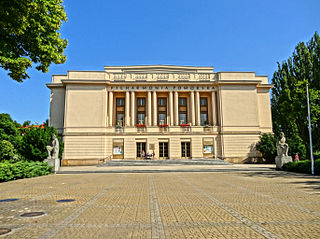 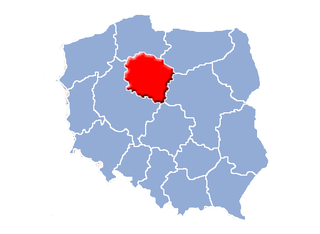 IV liga Cuyavia-Pomerania group is one of the groups of IV liga, the 5th level of Polish football league system. The league was created in season 2000/2001 after introducing new administrative division of Poland. Until the end of the 2007/08 season IV liga was placed at 4th tier of league system but this was changed with the formation of the Ekstraklasa as the top-level league in Poland.
The clubs from Kuyavian-Pomeranian Voivodeship compete in this group. The winner of the league is promoted to III liga group II. The bottom teams are relegated to the groups of Liga okręgowa from Kuyavian-Pomeranian Voivodeship. These groups are Cuyavia-Pomerania I and Cuyavia-Pomerania II.

Stefan Jan Klajbor was an architect and a cultural personage of Bydgoszcz during the 20th century.