Kwakwani is a mining and logging village on the Berbice River in the Upper Demerara-Berbice Region of Guyana. [2] Its altitude is 44 metres (147 feet). Kwakwani is approximately 100 km south of Linden. In 1942, the Berbice Bauxite Company opened a Bauxite Mining in the area which is the main industry of the village. [3] The population as of 2012 is about 2,504 people. [1]

The village has a school and a clinic. [2] It can be access via the unpaved road from Linden to Kwakani via Ituni, [4] and is one of the many gateways to the interior of Guyana. [2] The village is also home to the Kwakwani Airstrip. [5] 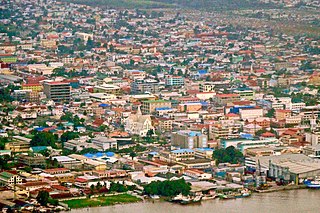 The economy of Guyana is the fastest growing in the world with a projected GDP growth of 26.2% in 2020. Guyana had a per capita gross domestic product of $8,300 in 2016 and an average GDP growth of 4.2% over the previous decade. Crude oil production started in 2019.

Port Mourant is a village on the Atlantic coast in East Berbice-Corentyne, Guyana. It is the birthplace of late president Cheddi Jagan as well as many of Guyana's most famous cricketers. Port Mourant was originally a sugar estate. Many residents are self-employed, but the sugar industry continues to be a source of employment.

Guyana Power and Light (GPL) is a publicly owned utility company in Guyana, providing electric power in the country. Domestic voltage can be 110 or 220 depending on the area, both 50 and 60 cycle power. Services are provided from Charity to Moleson Creek, including the islands of Leguan and Wakenaam in the Essequibo River.

Catherinas Lust is an estate located approximately 13.8 km from the town of Fort Wellington in the Mahaica-Berbice region of Guyana in South America. It is listed as a village in the 2012 census.