Kwansei Gakuin University (関西学院大学, Kansei Gakuin Daigaku), colloquially known as Kangaku (関学), is a non-denominational Christian private and coeducational university in Japan. The University  [ ja ] offers Bachelor’s, Master’s, and Doctoral degrees to around 25,000 students in almost 40 different disciplines across 11 undergraduate and 14 graduate programs. The university has a central campus in the city of Nishinomiya, and also has satellite campuses in Nishinomiya, Sanda, Osaka, and Tokyo. Kwansei Gakuin University has been selected for inclusion in the Japanese government's Top Global University Project as a Type B (Global Traction) university. [7] The university is often referred to as one of the four leading private universities in the greater Kansai region.

The name Kwansei Gakuin (関西学院, Kansei Gakuin) originated from the desire of Walter Russell Lambuth, the university's founder, to serve citizens of Kansai (関西), the western part of Japan, while the word gakuin (学院) means "college." The unusual romanization of Kansai as Kwansei is due to the way it would have been pronounced by progressive students in the late 19th century, when Kan-on pronunciations are seen as more educated. [8] The "official" pronunciation of kwan can be heard in performances of the school song, but the modern pronunciation of kan is the standard in other contexts. Though the university is commonly referred to as Kangaku, it would also be correct to say Kwangaku. [9]

In the context of "Mastery for Service," a "master" is an accomplished person in terms of their humanity, learning, and daily life. Kwansei Gakuin's avowed goal is to help students "master their God-given gifts in order to serve their neighbors, society and the world."

Kwansei Gakuin's symbol, the crescent moon, represents the purpose of education: students' growth to fullness in knowledge and wisdom.

Kwansei Gakuin University has agreements with several United Nations organizations. The university and United Nations Volunteers (UNV) reached an agreement establishing the university as the first institution of higher education in Asia to form a volunteer-sending partnership with the United Nations Information Technology Service (UNITeS) in 2003. KGU and the United Nations High Commissioner for Refugees (UNHCR) representation in Japan concluded an agreement to establish a special university scholarship system for refugees in Japan in May 2006. Under this agreement, Kwansei Gakuin started the UNHCR-KGU Higher Education Program for Refugees in Japan in April 2007, and two refugees were enrolled.

Kwansei Gakuin University has over 140 partner institutions overseas, and accepts more than 700 international students each year. [10]

Since 1929, the university's flagship Uegahara campus has been located in Nishinomiya, Hyōgo. The Uegahara campus was designed in a "Spanish Mission" style by William Merrell Vories (1880-1964), an American missionary, architect, educator, and entrepreneur. In 2017, the campus won an achievement award for its design from the Architectural Institute of Japan. [11] This campus is home to most of the administrative offices of Kwansei Gakuin.

This campus is home to the School of Education and Seiwa Junior College. It is 10 minutes away from the Nishinomiya Uegahara Campus on foot.

Located in Sanda, Hyōgo, this campus houses the School of Policy Studies and the School of Science and Technology. It has the same architectural style as its Nishinomiya-Uegahara predecessor, and is about an hour to 70 minutes from Nishinomiya by shuttle bus.

The Osaka Umeda Campus is located a short walk from the main public transport cluster of Osaka City. It holds graduate school classes for working people, and offers support for lifelong learning and student job placement.

The Tokyo Marunouchi Campus is on the 10th floor of the Sapia Tower, next to Tokyo Station. In addition to serving as an information hub and offering lectures, the campus provides job placement support for alumni in the Tokyo metropolitan area.

Kwansei Gakuin has one of the most diverse varsity athletic programs in Japan, with 34 varsity teams that compete in regional collegiate leagues. Although the school, unlike other private universities in the country, does not offer specific scholarships for student-athletes, it is still competitive with the top echelon of Japanese collegiate teams in the sports of American football, basketball, lacrosse and soccer.

The Fighters are one of the most decorated American football programs in Japan at the university level, with a record 28 national championships. [12] [13] [14] 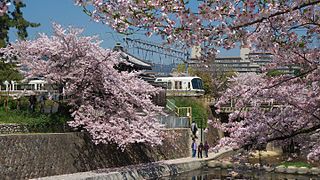 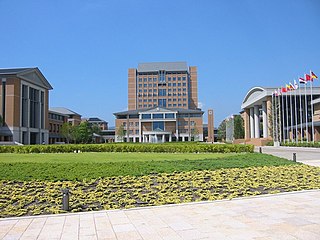 Kansai Gaidai University, almost always abbreviated Kansai Gaidai (関西外大), is located in Hirakata, Osaka, Japan. It is a private university focusing on foreign language studies. Kansai is the proper name of the large region where it is located, which includes the cities of Kyoto, Osaka and Kobe. Gaidai is a contraction of Gaikokugo Daigaku, which literally means "foreign language university". Gaidai is part of Kansai Science City, which is undergoing construction around the campus.

Kansai University, abbreviated as Kandai (関大), or Kansaidai (関西大), is a private non-sectarian and coeducational university located in Suita, Osaka, Japan as well as in two other locations: Sakai and Takatsuki, Osaka. Founded in 1886, it belongs to the old education system universities and is one of western Japan's four leading private universities: Kan-Kan-Do-Ritsu 関関同立 Kansai University, Kwansei Gakuin University, Doshisha University, and Ritsumeikan University.

Koyo Gakuin High School(甲陽学院高等学校) in Nishinomiya between Osaka and Kobe, Hyōgo Prefecture, combines junior and senior high schools for boys. Founded as a middle school in 1917 by Komakichiro Iga, supported by Tatsu-uma Family since 1920. Tatsu-uma Family is an owner of Hakushika brand, Japanese Refined Sake and the schools are run by "School Judicial Person Tatsu-uma Scholarship Society". It was reorganized into junior and senior high schools under the education reforms of 1948. Many of its alumni have succeeded in fields like business, medicine and academic.

Kobe College, abbreviated to KC, is a private non-sectarian liberal arts college located in Nishinomiya, Hyōgo, Japan. Chartered in 1948, it is the first women's college with university status in West Japan. 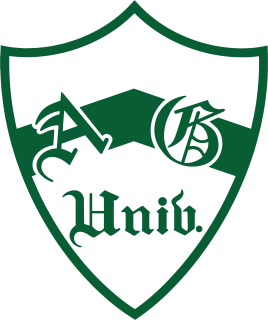 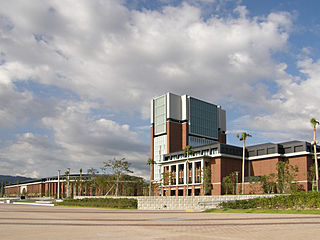 Kobe Gakuin University is a private, co-educational university located on the western edge of the city of Kobe, in Hyōgo Prefecture in Japan. It was founded in 1966 and overlooks the city of Akashi, the Akashi Straits and the Akashi Kaikyo Bridge - the longest suspension bridge in the world. The university has three campuses in Kobe. These are located near Akashi, near Nagata and on Port Island.

The city of Kobe, Japan, is home to a number of schools, both public and private. The following is a list of some of the more prominent academic institutions in Kobe:

Seiwa College was a private university in Nishinomiya, Hyōgo, Japan which was consolidated with Kwansei Gakuin University in 2009. 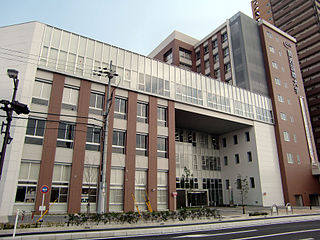 Kansai University of International Studies is a private university in Miki, Hyōgo, Japan. The school was first established as a junior women's college in 1987. In 1998 it became a co-ed four-year college. It opened a campus in Amagasaki city between Kobe and Osaka in 2009. 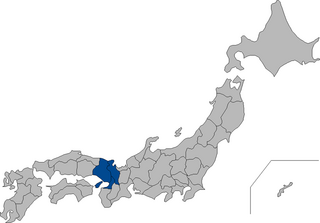 Kansai Big6 Baseball League is a collegiate baseball league located in central Kansai region of Japan, stretching from Hyōgo in the west to Kyoto in the east. The league joined the All Japan University Baseball Federation in 1951. 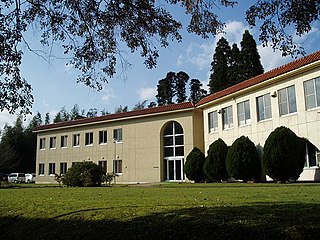 Saniku Gakuin College is a co-educational, Christian, private university in Japan. The main campus is located in Ōtaki, Chiba, Japan. The college is a part of the world-wide network of Seventh-day Adventist (SDA) institutions of higher education, the world's second largest Christian school system.

Jun Ichimori is a Japanese football player, who plays for Gamba Osaka as a goalkeeper.

Kosei Fukunaga, better known simply as Husheng or Kosei, is a Manchu-Japanese noblewoman. She was born in the Aisin Gioro clan, the imperial clan of the Qing dynasty. She is the younger daughter of Pujie, the younger brother of the last Chinese Emperor Xuantong, and her mother was Hiro Saga, a Japanese noblewoman who was distantly related to Emperor Shōwa.