Kyocera's original product was a ceramic insulator known as a "kelcima" for use in television picture tubes. The company quickly adapted its technologies to produce an expanding range of ceramic components for electronic and structural applications. In the 1960s, as the NASA space program, the birth of Silicon Valley and the advancement of computer technology created demand for semiconductor integrated circuits (ICs), Kyocera developed ceramic semiconductor packages that remain among its core product lines today.

The company acquired electronic equipment manufacturing and radio communication technologies in 1979 through an investment in Cybernet Electronics Corporation, which was merged into Kyocera in 1982. Shortly afterward, Kyocera introduced one of the first portable, battery-powered laptop computers, sold in the U.S. as the Tandy Model 100, which featured an LCD screen and telephone-modem data transfer capability.

Kyocera gained optical technologies by acquiring Yashica Company, Limited in 1983, along with Yashica's prior licensing agreement with Carl Zeiss, and manufactured film and digital cameras under the Kyocera, Yashica and Contax trade names until 2005, when the company discontinued all film and digital camera production.

In the 1980s, Kyocera marketed audio components, such as CD players, receivers, turntables, and cassette decks. These featured unique elements, including Kyocera ceramic-based platforms, and are sought by collectors to the present day. At one time, Kyocera owned the famous KLH brand founded by Henry Kloss, though Kloss and the original Cambridge design and engineering staff had left the company by the time of the Kyocera purchase. In 1989, Kyocera stopped production of audio components and sought a buyer for the KLH brand.

Expanding sales of photovoltaic solar energy products led the company to create Kyocera Solar Corporation in Japan in 1996, and Kyocera Solar, Inc. in the U.S. in 1999.

In 2008, Kyocera acquired Sanyo Mobile, the mobile phone division of Sanyo Electric Co., Ltd., and its associated operations in Japan, the United States and Canada.

In April 2009, Kyocera unveiled its EOS concept phone at CTIA, with an OLED and which is powered by kinetic energy from the user. The prototype phone also has a foldable design which is capable of morphing into a variety of shapes. [4]

In March 2010, Kyocera launched its first Smartphone (Zio) since 2001, after focusing on lower cost phones. [7]

Kyocera Document Solutions Corporation manufactures a wide range of printers, MFPs. and toner cartridges which are sold throughout Europe, the Middle East, Africa, Australia and the Americas. Kyocera printing devices are also marketed under the Copystar name in Americas and under TA Triumph-Adler and Utax names in EMEA (Europe-Middle East-Africa) region. This division is over seen by Aaron Thomas (North American division President), Henry Goode, and Adam Stevens

Kyocera manufactures mobile phones for wireless carriers in the United States and Canada. Marketing is done by its subsidiary Kyocera International, Inc.

Kyocera Corporation manufactures and markets phones for the Japanese market which are sold under different brands. Kyocera makes phones for some Japanese wireless carriers including au, willcom, SoftBank and Y!mobile.

In May 2012, Kyocera released the world's first speaker-less smartphone, the Kyocera Urbano Progresso. This phone produces vibration to conduct sound through the ear canal instead of the customary speaker, making it easier to hear phone conversations in busy and noisy places. This also benefits those who are having difficulty hearing, but are not totally deaf. It can be used across the world with CDMA, GSM, GPRS and UMTS antennas. This phone is only available in Japan. [13]

Kyocera maintains production bases for photovoltaic cells and solar modules in Japan and China. In 2009, it was announced that Kyocera's solar modules were available as on option on the Toyota Prius. [14]

Between 1978 and 1998, Kyocera and the International Affairs Board of the City of San Diego sponsored an all-expense paid tour of Japan for students from the United States called HORIZON (stylized in all capital letters and designated by year: e.g. HORIZON '98). The program's purpose was to acquaint these students with the country of Japan, its people and their culture - and to promote friendship and understanding. The program was open to students ages 10 – 14 who filled out the application and were chosen in a random drawing of all those that apply.

The brand Mita was the first main sponsor of the Argentinian team Atlético Independiente. This relationship was maintained from 1985 to 1992.

Kyocera is currently the sponsor of the soccer club Kyoto Sanga F.C. of the J-League (its hometown team; here the word "Kyocera" is written in Japanese, everywhere else in the Latinized logo).

In Japan, Kyocera holds the naming rights for the Kyocera Dome Osaka, colloquially known as Osaka Dome. The indoor dome is the home field of the baseball teams Orix Buffaloes and Hanshin Tigers.

Between 2005 and 2008, Kyocera also sponsored Reading F.C. During this period Reading won the Football League Championship with a record 106 points.

Also between 2005 and 2008, Kyocera was the sponsor of Brazilian football team Atlético Paranaense, and acquired the naming rights of their stadium. 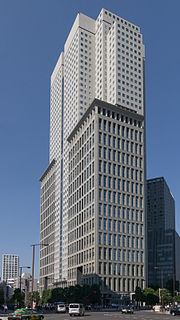 NTT Docomo, Inc. is a Japanese mobile phone operator. The name is officially an abbreviation of the phrase, "do communications over the mobile network", and is also from a compound word dokomo, meaning "everywhere" in Japanese. Docomo provides phone, video phone, i-mode (internet), and mail services. The company's headquarters are in the Sanno Park Tower, Nagatachō, Chiyoda, Tokyo. NTT Docomo is the largest wireless carrier in Japan, with 82.632 million subscribers as of March 2021.

SK Telecom Co., Ltd. is a South Korean wireless telecommunications operator and is part of the SK Group, one of the country's largest chaebols. It leads the local market with 50.5 percent share as of 2008. SK Telecom is the largest wireless carrier in South Korea, with 27.019 million subscribers as of Q4 2017.

Binary Runtime Environment for Wireless is an application development platform created by Qualcomm, originally for code division multiple access (CDMA) mobile phones, featuring third-party applications such as mobile games. It is offered in some feature phones but not in smartphones. First developed in 1999, as a platform for wireless applications on CDMA-based mobile phones, it debuted in September 2001. As a software platform that can download and run small programs for playing games, sending messages, and sharing photos, the main advantage of Brew MP is that the application developers can easily port their applications among all Brew MP devices by providing a standardized set of application programming interfaces. Software for Brew MP enabled handsets can be developed in C or C++ using the freely downloadable Brew MP software development kit (SDK). The BREW runtime library is part of the wireless device on-chip firmware or operating system to allow programmers to develop applications without needing to code for system interface or understand wireless applications. BREW is described as a pseudo operating system, but not a true mobile operating system. BREW is not a virtual machine such as Java ME, but it runs a native code.

The Kyocera QCP-6035 was one of the first smartphones to appear in the American market, released in January 2001, one of the first devices to combine a PDA with a mobile phone. Its predecessor was the Qualcomm pdQ released in 1999, built by Qualcomm's handset division, which Kyocera acquired in 2000. 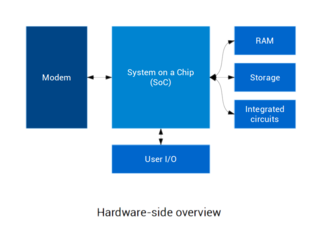 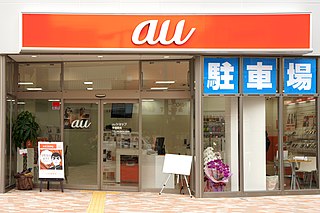 au, or au by KDDI, is a Japanese mobile phone operator. au is a brand marketed by KDDI in the main islands of Japan and by Okinawa Cellular in Okinawa for their mobile cellular services. au is the second-largest wireless carrier in Japan, with 60.398 million subscribers as of March 2021. 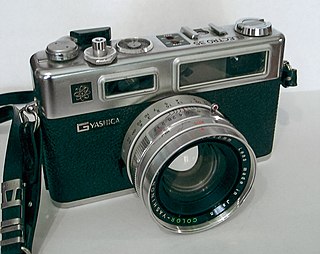 Novarra was a mobile internet software company founded in 2000 and based in Itasca, Illinois, USA. It created web-based services such as web internet access, portals, videos, widgets and advertising for mobile devices. Novarra provided access to the internet and other services through wireless handsets, PDAs and laptops and sold directly to operators, mobile handset manufacturers and internet brand companies. In 2010, Nokia acquired 100% of Novarra's shares.

Nexian is an Indonesian mobile phone company which was acquired by Spice Group in 2011. Started in 2006 by Martono Jayakusuma. They were the first local brand who achieved 100,000 locally produced handset in 6 month. It has the fourth largest market share with 5% of mobile phones in Indonesia. Nexian creates mostly QWERTY mobile phones. They sell smartphones with multi SIM cards in-one on budget markets. 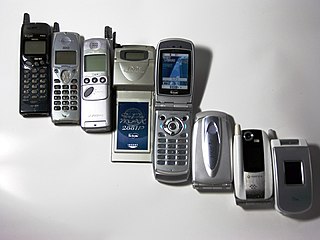 The Japanese mobile phone industry is one of the most advanced in the world. As of March, 2022 there were 199.99 million mobile contracts in Japan according to the Ministry of Internal Affairs and Communications. This is 158 percent of Japan's total population.

Wikimedia Commons has media related to Kyocera .
This page is based on this Wikipedia article
Text is available under the CC BY-SA 4.0 license; additional terms may apply.
Images, videos and audio are available under their respective licenses.