Kyoto is the capital and largest city of Kyoto Prefecture, with other major cities including Uji, Kameoka, and Maizuru. [1] (pp565–587) Kyoto Prefecture is located on the Sea of Japan coast and extends to the southeast towards the Kii Peninsula, covering territory of the former provinces of Yamashiro, Tamba, and Tango. Kyoto Prefecture is centered on the historic Imperial capital of Kyoto, and is one of Japan's two "prefectures" using the designation fu rather than the standard ken for prefectures. Kyoto has made Kyoto Prefecture one of the most popular tourism destinations in Japan for national and international tourists, and 21% of the prefecture's land area was designated as Natural Parks. Kyoto Prefecture forms part of the Keihanshin metropolitan area, the second-most-populated region in Japan after the Greater Tokyo area and one of the world's most productive regions by GDP.

Until the Meiji Restoration, the area of Kyoto Prefecture was known as Yamashiro. [1] (p780)

For most of its history, the city of Kyoto was Japan's Imperial capital. The city's history can be traced back as far as the 6th century. In 544, the Aoi Matsuri was held in Kyoto to pray for good harvest and good weather.

Kyoto did not start out as Japan's capital. A noteworthy earlier capital was Nara. In 741, Emperor Shōmu moved the capital briefly to Kuni-kyo, between the cities of Nara and Kyoto, in present-day Kyoto Prefecture. In 784, the capital was moved to Nagaokakyō, also in present-day Kyoto Prefecture. In 794, Emperor Kanmu moved the capital to Heian-kyō, and this was the beginning of the current-day city of Kyoto. Even today, almost all of the streets, houses, stores, temples and shrines in Kyoto exist where they were placed in this year.

In 1467, a great civil war, the Ōnin War, took place inside Kyoto, and most of the town was burned down. Japan plunged into the age of warring feudal lords. A new strong man, Tokugawa Ieyasu, established the shogunate at Edo (today's Tokyo) in 1603.

In the 15th century AD, tea-jars were brought by the shōguns to Uji in Kyoto from the Philippines which was used in the Japanese tea ceremony. [3]

The Meiji Restoration returned Japan to imperial rule in 1868. Emperor Meiji, who was now the absolute sovereign, went to stay in Tokyo during the next year. The imperial court has not returned to Kyoto since then. During the instigation of Fuhanken Sanchisei in 1868, the prefecture received its suffix fu . The subsequent reorganization of the old provincial system merged the former Tango Province, Yamashiro Province and the eastern part of Tanba Province into today's Kyoto Prefecture.

Although many Japanese major cities were heavily bombed during World War II, the old capital escaped such devastation. [4] During the occupation, the U.S. Sixth Army was headquartered in Kyoto. [5]

Kyoto Prefecture is almost in the center of Honshu and of Japan. It covers an area of 4,612.19 square kilometres (1,780.78 sq mi), which is 1.2% of Japan. Kyoto is the 31st largest prefecture by size. To the north, it faces the Sea of Japan and Fukui Prefecture. To the south, it faces Osaka and Nara Prefectures. To the east, it faces Mie and Shiga Prefectures. To its west is Hyōgo Prefecture. The prefecture is separated in the middle by the Tanba Mountains. This makes its climate very different in the north and south.

See also: List of cities in Kyoto Prefecture by population

Kansai Science City is located in the southwest.

Northern Kyoto on the Tango Peninsula has fishing and water transportation, and midland Kyoto has agriculture and forestry. The prefecture produces 13% of the domestic sake and green tea. Japan's largest vertical farm is located in the prefecture. [11]

The sports teams listed below are based in Kyoto.

The city of Kyoto is one of the most popular tourist spots in Japan, and many people from far and wide visit there. Along with Tokyo, Kyoto is a favorite location for the graduation trip of Junior High and High schools.

Some of the festivals held in Kyoto are Aoi Matsuri from 544, Gion Matsuri from 869, Ine Matsuri from the Edo-era, Daimonji Gozan Okuribi from 1662, and Jidai Matsuri from 1895. Every shrine and temple holds some sort of event, and many of them are open for public viewing.

On 1 August 2013, prefectural and municipal authorities gave consent for a USFJ missile monitoring station to be set up in the city of Kyōtango. It will be co-located with a JASDF facility already based in the city. At least initially, its primary sensor will be a mobile X-band radar used to gather data on ballistic missile launches which will then be relayed by the station to warships equipped with Aegis air defense systems and to ground-based interceptor missile sites. A hundred and sixty personnel will be based at the station. [16]

The current governor of Kyoto is Takatoshi Nishiwaki, a former vice minister of the Reconstruction Agency. He has been elected in April 2018. [17]

The previous governor of Kyoto is former Home Affairs Ministry bureaucrat Keiji Yamada. He has been reelected to a fourth term in April 2014 with support from the major non-Communist parties against only one JCP-supported challenger. [18] [19] [20]

The prefectural assembly has 60 members from 25 electoral districts and is still elected in unified local elections (last round: 2019). As of September 2020, it was composed as follows: Liberal Democratic Party 30, Japanese Communist Party 12, Democratic Party 11, Kōmeitō 5, Japan Restoration Party 2. [21]

Kyoto's delegation to the National Diet consists of six members of the House of Representatives and four members (two per election) of the House of Councillors. After the national elections of 2016, 2017 and 2019, the prefecture is represented by four Liberal Democrats and two Democrats in the lower house, and two Liberal Democrats, one Democrat and one Communist in the upper house.

The prefectural flower of Kyoto is the weeping cherry. The Kitayama Sugi is the official tree, and the streaked shearwater the bird that symbolizes the prefecture.

Kyoto Prefecture has sister relationships with these places: [22]

These relationships are distinct from those of cities in Kyoto Prefecture with other cities.

Uji is a city on the southern outskirts of the city of Kyoto, in Kyoto Prefecture, Japan. 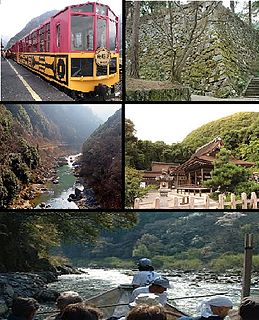 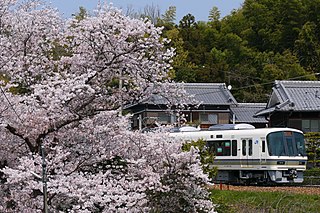 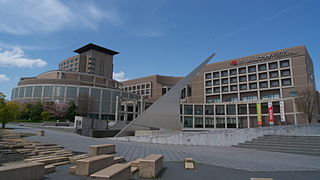 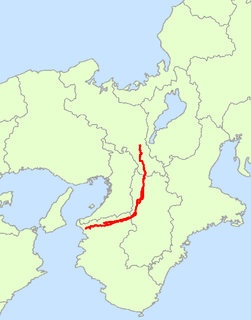 National Route 24 is a national highway connecting Kyoto and Wakayama in Japan.

The Miyazu Line is a railway line of the Kitakinki Tango Railway in Kyoto Prefecture and Hyōgo Prefecture, Japan. Trains on the line are operated by Willer Trains Inc. as part of its Kyoto Tango Railway system.

The Keinawa Expressway is a 104.9-km-long north–south National Highway with access control in the Kinki region of Japan that connects Kyoto Prefecture to Wakayama Prefecture via Nara Prefecture. It is numbered "E24" under Ministry of Land, Infrastructure, Transport and Tourism's "Expressway Numbering Systemg."