Kyriakos Mitsotakis (Greek : Κυριάκος Μητσοτάκης; born 4 March 1968) is a Greek politician that is serving as Prime Minister of Greece since 8 July 2019 . A member of New Democracy, he has been its president since 2016. Mitsotakis previously was Leader of the Opposition from 2016 to 2019 and Minister of Administrative Reform from 2013 to 2015.

He was first elected to the Hellenic Parliament for the Athens B constituency in 2004. After New Democracy suffered two election defeats in 2015, he was elected the party's leader in January 2016. Three years later, he led his party to a majority in the 2019 election. He is the son of former Prime Minister Konstantinos Mitsotakis. [1] [2] [3]

Born in Athens, he is the son of the former Prime Minister of Greece and honorary president of New Democracy, Konstantinos Mitsotakis, and his wife Marika (née Giannoukou). At the time of his birth, his family had been placed under house arrest by the Greek military junta that had declared his father persona non grata and imprisoned him on the night of the coup. [4] In 1968, when he was only 1 year old, the family escaped to Turkey with the help of then Turkish Minister of Foreign Affairs İhsan Sabri Çağlayangil. After a while, they moved from Turkey to Paris and waited until 1974 to return to Greece after democracy had been restored. [5] Later, Mitsotakis described the first six months of his life as political imprisonment. [6]

From 1990 to 1991 Kyriakos Mitsotakis worked as a financial analyst at the corporate finance division of Chase Bank in London. From 1991 to 1992, Mitsotakis returned to Greece and joined the Hellenic Army to fulfil his mandatory national service obligations. From 1995 to 1997, and following the completion of his post-graduate studies, he was employed by the consultancy McKinsey & Company in London, focusing primarily on the telecommunications and financial services industries. From 1997 to 1999 he worked for Alpha Ventures, a private equity subsidiary of Alpha Bank, as a senior investment officer, executing venture capital and private equity transactions. In 1999 he founded NBG Venture Capital, the private equity and venture capital subsidiary of the National Bank of Greece, and acted as its CEO until April 2003, when he resigned to pursue a career in politics, managing its portfolio and executing transactions in Greece and the Balkans. [7]

In January 2003 he was nominated by the World Economic Forum as a global leader of tomorrow. [8]

In 24 June 2013, Mitsotakis was appointed as the Minister of Administrative Reform and e-Governance in Antonis Samaras' cabinet, succeeding Antonis Manitakis. He served in this position until January 2015. During this time, he pursued comprehensive national reforms by implementing a functional reorganization of institutions, structures and processes. He steadfastly supported the drastic downsizing of the Public Sector and the structural reform of the tax administration.

In 2015, Mitsotakis served as a parliamentary representative for New Democracy, representing the President of the party in Parliament, as well as the body of the party's Representatives. He was charged with expressing the positions of his party during Parliamentary procedures and discourse, as well as ensuring the proper function of Parliament through a process of checks and balances. In March 2015, he claimed that then-Minister of Finance Yanis Varoufakis was undermining the Greek negotiations over the third bailout programme, saying: "Every time he opens his mouth, he creates a problem for the country’s negotiating position." [9]

Mitsotakis was the first of four New Democracy members to announce their candidacy in the leadership election, declared following the resignation of Antonis Samaras as party leader and the failure of New Democracy in the September 2015 snap election. [10] Amongst the other contestants was then-interim leader and former Speaker of the Hellenic Parliament Vangelis Meimarakis. According to the Financial Times , Mitsotakis was "billed as an outsider in the leadership race" due to the party establishment's support of Meimarakis' candidacy. [11] Following the first round of voting with no clear winner, Mitsotakis came second, 11% behind Meimarakis. [11]

On 10 January 2016, Mitsotakis was elected president of the New Democracy political party succeeding Ioannis Plakiotakis (transitional president) with almost 4% difference from opponent Vangelis Meimarakis. A week following Mitsotakis' election as leader, two opinion polls were published that put New Democracy ahead of Syriza for the first time in a year. [12]

His party won 33% of the votes in the European elections in 2019. [13] He managed to win back votes from the Golden Dawn Party. [14] Following the election results, the Hellenic Parliament was dissolved and a snap election was called. [15]

New Democracy was victorious in the 2019 legislative election, scoring 39.85% of votes and securing 158 seats in the Hellenic Parliament. On 8 July 2019, Greek President Prokopis Pavlopoulos accepted Tsipras's resignation and tasked Mitsotakis with forming a new government. [16] Mitsotakis was sworn in as Prime Minister the same day as well. [2] [3] [1] On 9 July, the ministers in his government were sworn in.

Mitsotakis is the younger brother of former Minister for Foreign Affairs and Mayor of Athens Dora Bakoyannis, making him the brother-in-law of the late Pavlos Bakoyannis, who was assassinated by the terrorist group 17 November in 1989 and the uncle of Kostas Bakoyannis, [17] former Regional Governor of Central Greece and current Mayor of Athens.

Mitsotakis is married to Mareva Grabowski, an investment banker with Greek, Polish and Egyptian roots. They have three children, Sophia, Constantine and Daphne. [18]

In addition to Greek, he speaks English, French and German. [19]

Mitsotakis is a member of the Greek Orthodox Church.

In 2007, it was reported that Mitsotakis was involved in the Siemens Greek bribery scandal. [20] However, Mitsotakis has repeatedly denied any involvement and no indication of guilt has so far been proven. The Siemens trial, in which Mitsotakis is not involved, is still pending. [21]

Electronic office equipment, call centers, air conditioners etc. worth c. €130,000 were received in the period preceding the 2007 elections (June to September 2007) by Mitsotakis from Siemens and two of its subsidiaries. The invoices indicate payment period of up to 60 days, however no part of the amount was paid until February 2008, when part of it was paid, just when the Siemens case was reopened by the courts, and an amount of €43,850 was paid by check from Mr. Mitsotakis on Monday June 2. Earlier (on 29 May) testimonies had been made about "donations and grants by Siemens to politicians" and on 30 May 2008 the prosecutor's investigation took place at the company's offices. [22] [23] 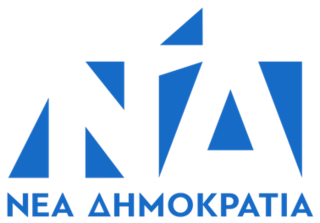 New Democracy is a liberal-conservative political party in Greece. In modern Greek politics, New Democracy has been the main centre-right political party and one of the two major parties along with its historic rival, the Panhellenic Socialist Movement (PASOK). New Democracy and PASOK were created in the wake of the toppling of the military junta in 1974, and ruled Greece alternately for the next four decades. Following the electoral decline of PASOK, New Democracy remained one of the two major parties in Greece, the other being the Coalition of the Radical Left (SYRIZA). 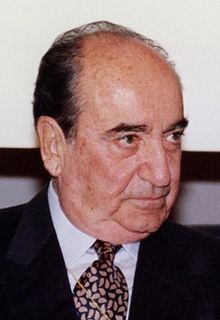 Theodora "Dora" Bakoyanni is a Greek politician. From 2006 to 2009 she was Minister of Foreign Affairs of Greece, the highest position ever to have been held by a woman in the Cabinet of Greece at the time; she was also Chairperson-in-Office of the Organization for Security and Co-operation in Europe in 2009. Previously she was the Mayor of Athens from 2003 to 2006, the first female mayor in the city's history, and the first woman to serve as mayor of a city hosting the Olympic Games. She also served as Minister for Culture of Greece from 1992 to 1993. 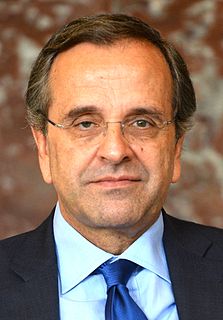 Konstantinos (Kostis) Hatzidakis is a Greek politician from the New Democracy party. He currently serves as the Minister for the Environment and Energy in the Cabinet of Kyriakos Mitsotakis.

Evangelos-Vasileios "Vangelis" Meimarakis, is a Greek lawyer and politician who served as the acting President of New Democracy and Leader of the Opposition in Greece from 5 July to 24 November 2015, competing as the challenger to Prime Minister Alexis Tsipras in the September 2015 Greek legislative election. He lost in the run-off of the New Democracy leadership election, 2015–16. Since 2019, he has been a Member of the European Parliament.

Alexis Tsipras is a Greek politician serving as Leader of the Opposition since 2019. The leader of left-wing party Syriza since 2009, he served as Prime Minister of Greece from 2015 to 2019.

Marika Mitsotakis was the wife of the former Prime Minister of Greece Konstantinos Mitsotakis. She was regarded as a prominent political voice with the New Democracy political party, her husband's government, and Greek politics. She was nicknamed "Mrs. Marika" among Greeks. 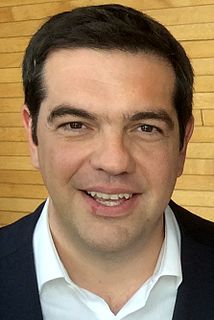 The January 2015 Greek legislative election was held in Greece on Sunday, 25 January, to elect all 300 members to the Hellenic Parliament in accordance with the constitution. The election was held earlier than scheduled due to the failure of the Greek parliament to elect a new president on 29 December 2014.

Theodoros Skilakakis is Finance State Secretary of the Hellenic Republic in the government of Kyriakos Mitsotakis, where he holds the portfolio of Government Expenditure. He is also a former Greek MEP, member of the Alliance of Liberals and Democrats for Europe and Chairman of the Central Committee of the party "Drasi". 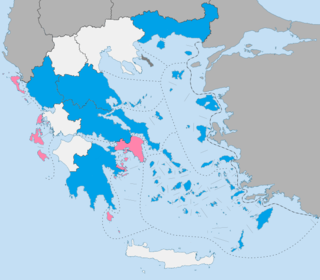 Local elections were held in Greece on 18 May 2014 and 25 May 2014. Voters elected representatives to the country's local authorities, comprising 13 regions and 325 municipalities.

The River was a centrist and social-liberal political party in Greece. The party was founded in February 2014 by Stavros Theodorakis. The party did not run in the 2019 elections and had no seats in the Hellenic Parliament.

Apostolos G. Tzitzikostas is a Greek politician of the New Democracy party, governor of the region of Central Macedonia since 2013 and President of the European Committee of the Regions since 2020. 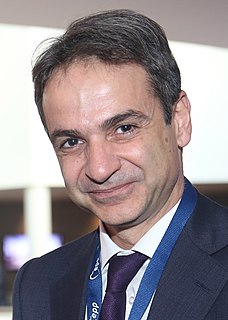 The 2019 Greek legislative election was held on 7 July 2019. All 300 seats in the Hellenic Parliament were contested.

Christos Staikouras is a Greek economist and politician who is currently New Democracy's Coordinator of Economic Affairs. Since the 2007 legislative election, he has been a Member of the Hellenic Parliament (MP) for Phthiotis. After the 2019 election, he was appointed Minister for Finance in the Cabinet of Kyriakos Mitsotakis.

This page incorporates information from the Hellenic Parliament website