Last updated September 23, 2022
Island and region of Japan
This article is about the location in Japan. For the Chinese place with the cognate name Jiuzhou, see Nine Provinces.

listen ), literally "Nine Provinces") is the third-largest island of Japan's five main islands and the most southerly of the four largest islands (i.e. excluding Okinawa). [3] [4] In the past, it has been known as Kyūkoku (九国, "Nine Countries"), Chinzei (鎮西, "West of the Pacified Area") and Tsukushi-no-shima (筑紫島, "Island of Tsukushi"). The historical regional name Saikaidō (西海道, lit. West Sea Circuit) referred to Kyushu and its surrounding islands. Kyushu has a land area of 36,782 square kilometres (14,202 sq mi) and a population of 14,311,224 in 2018. [5]

In the 8th-century Taihō Code reforms, Dazaifu was established as a special administrative term for the region. [6]

The island is mountainous, and Japan's most active volcano, Mt Aso at 1,591 metres (5,220 ft), is on Kyushu. There are many other signs of tectonic activity, including numerous areas of hot springs. The most famous of these are in Beppu, on the east shore, and around Mt. Aso in central Kyushu. The island is separated from Honshu by the Kanmon Straits. Being the nearest island to the Asian continent, [7] historically it is the gateway to Japan. [8]

Today's Kyushu Region (九州地方, Kyūshū-chihō) is a politically defined region that consists of the seven prefectures on the island of Kyushu (which also includes the former Tsushima and Iki as part of Nagasaki), plus Okinawa Prefecture to the south:

Kyushu has 10.3 percent of the population of Japan. [11] Most of Kyushu's population is concentrated along the northwest, in the cities of Fukuoka and Kitakyushu, with population corridors stretching southwest into Sasebo and Nagasaki and south into Kumamoto and Kagoshima. Except for Oita and Miyazaki, the eastern seaboard shows a general decline in population.

Politically, Kyushu is described as a stronghold of the Liberal Democratic Party. [12]

Per Japanese census data, [13] [14] the Kyushu region's population with Ryukyu Islands (Okinawa and Kagoshima Prefectures) has experienced a large population decline since around 2000. However, the population decline is mild mainly due to relatively high birth rate of Ryukyuans both within the Ryukyuan lands (Okinawa and Kagoshima) and throughout the Kyushu region. In addition, the other prefectures in Kyushu also have exceptionally high TFRs compared to the rest of Japan. [15] [16] The Ryukyuans are an indigenous minority group in Japan.

Besides the volcanic area of the south, there are significant mud hot springs in the northern part of the island, around Beppu. The springs are the site of occurrence of certain extremophile microorganisms, which are capable of surviving in extremely hot environments. [17]

Kyushu is noted for various types of porcelain, including Arita, Imari, Satsuma, and Karatsu. Heavy industry is concentrated in the north around Fukuoka, Kitakyushu, Nagasaki, and Oita and includes chemicals, automobiles, semiconductors, metal processing, shipbuilding, etc. [18]

Major universities and colleges in Kyushu:

Kyushu is linked to the larger island of Honshu by the Kanmon Railway Tunnel, [20] which carries the non-Shinkansen trains of the Kyushu Railway Company, and the newer Shin-Kanmon Tunnel carrying the San'yō Shinkansen. Railways on the island are operated by the Kyushu Railway Company and West Japan Railway Company, as well as a variety of smaller companies such as Amagi Railway [21] and Nishitetsu Railway. [22] Kyushu Shinkansen trains also operate between major cities on the island, [23] such as Fukuoka and Kagoshima, [24] with an additional route under construction between Fukuoka and Nagasaki expected to be in operation from 2023. [25] Kyushu is also known for its scenic train services, such as the Limited Express Yufuin no Mori and Limited Express Kawasemi Yamasemi. [23]

The Kanmon Bridge and Kanmon Roadway Tunnel also connect the island with Honshu, allowing for vehicular transport between the two. [26] The Kyushu Expressway spans the length of the island, linking the Higashikyushu Expressway and Ibusuki Skyline, connecting major cities such as Fukuoka and Kumamoto along the way.[ citation needed ] There are also many quiet country roads, including popular tourist routes such as the Nichinan coast road and the Aso Panorama Line in Kumamoto Prefecture. Bus services are available and cover 2,400 routes within Kyushu's cities, connecting many other destinations. [23] 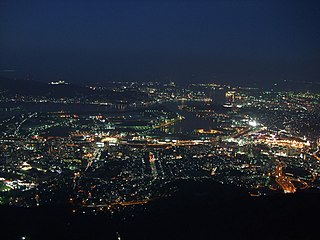 The Kyushu Shinkansen is a line of the Japanese Shinkansen high-speed railway network. It is an extension of the San'yō Shinkansen from Honshu, connecting the city of Fukuoka in the north of Japan's Kyushu Island to the city of Kagoshima in the south. The line runs parallel to the existing Kagoshima Main Line and is operated by the Kyushu Rail Company. 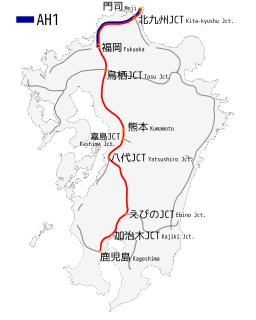 Kyushu Expressway is one of the Expressways of Japan from Kitakyūshū to west of Kagoshima linking with the Higashikyushu Expressway and the Ibusuki Skyline. It runs through the prefectures of Fukuoka, the eastern half of the Saga, Kumamoto, Miyazaki and the Kagoshima prefectures. The freeway runs entirely on the island of Kyūshū. The total length is 346.2 km. It does not cover Ōita or Nagasaki.

Northern Kyushu is a subregion of Kyushu.

The Prince Takamatsu Cup Nishinippon Round-Kyūshū Ekiden was a running race in Japan that was held annually from 1951 to 2013. Contestants from the prefectures on the island of Kyūshū, as well as from Yamaguchi and Okinawa Prefectures, gathered each November. The event was held at the Kyushu island, beginning in Nagasaki and proceeding to the cities of Sasebo, Saga, Kumamoto, Minamata, Kagoshima, Miyazaki, Nobeoka, Ōita, Kitakyushu, and finally Fukuoka. The 1064-km course consisted of 72 segments, and was the longest relay race in the world. 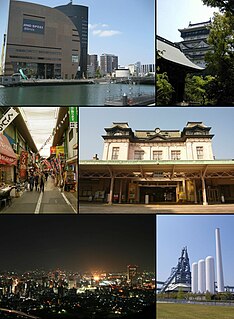 Kitakyushu is a city located in Fukuoka Prefecture, Japan. As of June 1, 2019, Kitakyushu has an estimated population of 940,978, making it the second-largest city in both Fukuoka Prefecture and the island of Kyushu after the city of Fukuoka. It is one of Japan's 20 designated cities, one of three on Kyushu, and is divided into seven wards. 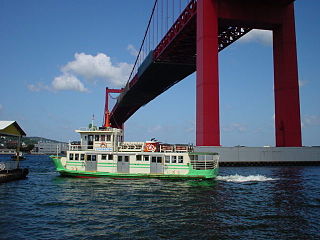 The Kyushu proportional representation block is one of eleven proportional representation (PR) blocks for the House of Representatives in the Diet of Japan. It consists of the Kyushu region and Okinawa prefecture, and consists of the prefectures of Fukuoka, Saga, Nagasaki, Kumamoto, Ōita, Miyazaki, Kagoshima, and Okinawa. Proportional voting blocks were first introduced in the 1996 General Election. The block elects 21 members to the House of Representatives.