Buzkashi is a Central Asian sport in which horse-mounted players attempt to place a goat or calf carcass in a goal. Similar games are known as kokpar, kupkari, and ulak tartysh in Kyrgyzstan and Kazakhstan, and as kökbörü and gökbörü in Turkey, where it is played mainly by communities originally from Central Asia.

Kyrgyzstan, officially the Kyrgyz Republic, also known as Kirghizia, is a landlocked country in Central Asia. It is bordered by Kazakhstan, Uzbekistan, Tajikistan and China. Its capital and largest city is Bishkek.

Bride kidnapping, also known as bridenapping, marriage by abduction or marriage by capture, is a practice in which a man abducts the woman he wishes to marry. 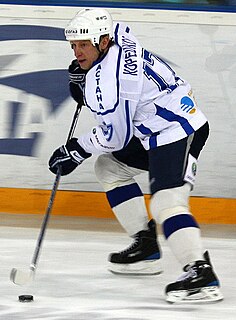 Shagai, chükö, asyk/ashyk/oshuq refers to the astragalus of the ankle of a sheep or goat. The bones are collected and used for traditional games and fortune-telling throughout Central Asia, and games involving the ankle bones may also be referred to by the name of the bones. They may be painted bright colours. Such bones have been used throughout history, and are thought to be the first forms of dice. In English language sources, shagai may be referred to as "ankle bones", and playing with shagai is sometimes called ankle bone shooting.

Ride and Tie is an endurance racing sport combining running and horse riding. Teams consist of two runners and one horse who complete a 20–100 mile trail course by "leapfrogging" one another.

The 1994 Grand National was the 147th official renewal of the Grand National horse race that took place at Aintree near Liverpool, England, on 9 April 1994.

One Man was an Irish-bred National Hunt steeplechase racehorse sired by Remainder Man out of the mare Steal On. The popular grey won 20 of 35 races, including the Queen Mother Champion Chase in 1998. He was trained by the late Gordon W. Richards and owned by John Hales. Renowned for his jumping ability and high cruising speed, he was nicknamed his "little bouncing ball" by Richards and was adopted by many as the new Desert Orchid. One Man received a Timeform rating of 179, an outstanding figure.

The 1995 Grand National was the 148th official renewal of the famous Grand National steeplechase that took place at Aintree near Liverpool, England, on 8 April 1995.

The 1992 Grand National was the 146th renewal of the world-famous Grand National horse race that took place at Aintree Racecourse near Liverpool, England, on 4 April 1992.

Buddy's Pony Express is a 1935 Warner Bros. Looney Tunes cartoon, directed by Ben Hardaway. The short was released on March 9, 1935, and stars Buddy, the second star of the series.

Tour d’Azerbaïdjan – is a 2.1 multi-stage bicycle race of the UCI Europe Tour, which takes place in Azerbaijan around May. Each day, participants start on a new phase of the race. The race is held in 7 regions of Azerbaijan and finishes in the capital, Baku. Other large cities the race moves through are: Oguz, Chamakh, Maraza, Ismayilli, Gabala, Sheki.

In Turkic mythology, Su Iyesi is a water spirit. It corresponds to the nymph in Turkic cultures. It is a disembodied, incorporeal, intangible entity, but she can turn into a female creature and daughter of Yer Tanrı. Sometimes the master of water is depicted in the form of a bull.

Yel iyesi is the Turkic spirit or deity of wind. The name comes from the Turkic words "Yel," which means wind, and "iye," the familiar spirit of any natural asset.

The 2014 World Nomad Games, officially known as the 1st World Nomad Games, was the inaugural edition held in Cholpon-Ata, Kyrgyzstan from 9–14 September 2014 with 19 sports featured in the games. While organising the first edition of the Games, the Kyrgyz government spent more than 3 million dollars. More than 400 athletes from 20 countries took part in the event.

Chatelaine (1930–1937) was a British Thoroughbred racehorse and broodmare. After failing to win in her first seven races she was still a maiden when she recorded a 25/1 upset victory in the Epsom Oaks. She went on to win the Scarbrough Stakes and dead-heated for the Champion Stakes as well as finishing second in the Jockey Club Stakes and finishing third in the Coronation Cup. She was retired to become a broodmare but died in 1937 after producing only two foals, neither of which survived. 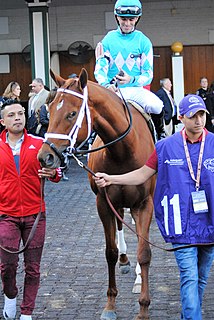 Monomoy Girl is an American Thoroughbred racehorse who was the American Champion Three-Year-Old Filly of 2018. She showed very promising form as a juvenile in 2017 when she won her first three races before being narrowly beaten in the Golden Rod Stakes. In the following spring she took the Rachel Alexandra Stakes and the Ashland Stakes before winning the Kentucky Oaks, the filly equivalent of the Kentucky Derby. She followed this up with wins in the Acorn Stakes and Coaching Club American Oaks, but was disqualified to second for interference in the Cotillion Stakes. She then rebounded to win the Breeders' Cup Distaff while facing older horses for the first time.