L'Eliana (Spanish : La Eliana) is a municipality in the comarca of Camp de Túria in the Valencian Community, Spain. 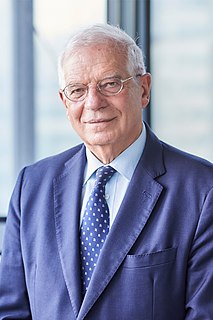 Josep Borrell Fontelles is a Spanish Argentine politician serving as High Representative of the Union for Foreign Affairs and Security Policy since 1 December 2019. A member of the Spanish Socialist Workers' Party (PSOE), he served as President of the European Parliament from 2004 to 2007 and as Minister of Foreign Affairs, European Union and Cooperation in the Government of Spain from 2018 to 2019.

Ramón Melendi Espina, known as Melendi, is a Spanish singer-songwriter. His specialties are rock, flamenco, and rumba styles.

Correfocs ; literally in English "fire-runs") are among the most striking features present in Valencian and Catalan festivals. In the correfoc, a group of individuals will dress as devils and light up fireworks – fixed on devil's pitchforks or strung above the route. Dancing to the sound of a rhythmic drum group, they set off their fireworks among crowds of spectators. The spectators that participate dress to protect themselves against small burns and attempt to get as close as possible to the devils, running with the fire. Other spectators will watch from "safe" distances, rapidly retreating as necessary.

Spain has participated in the Eurovision Song Contest 60 times since making its debut in 1961, where they finished ninth. Since 1999, Spain has been one of the "Big Five" countries, along with France, Germany, Italy and the United Kingdom, that are automatically prequalified for the final each year as they are the biggest financial contributors to the European Broadcasting Union (EBU). Spain has competed in the contest continuously since the country's debut in 1961. The only country with a longer run of uninterrupted Eurovision appearances is the United Kingdom, ever-present since 1959. 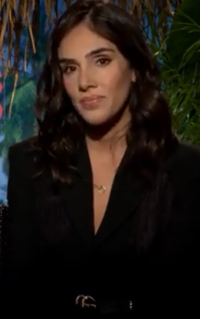 Sandra Echeverría Gamboa is a Mexican actress and singer.

Martina Stoessel-Muzlera, known professionally as Martina Stoessel, or by the stage name Tini is an Argentine actress, singer, dancer and model. Stoessel began her career by appearing on the Argentine children's television series Patito Feo (2007–2008). In her teens, she rose to prominence for her lead role as Violetta Castillo in the Disney Channel Latin America original telenovela, Violetta (2012–2015).

Club Balonmano Sagunto was a Spanish women's handball club from Sagunto founded in 1978 which in July, 2012 moved to Valencia and joint CE Handbol Marítim to play in División de Honor as Valencia Aicequip.

Eliana Menassé is a Mexican painter and member of the Salón de la Plástica Mexicana, an honor society for Mexican artists 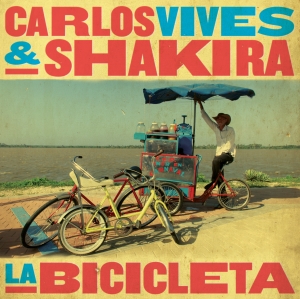 "La Bicicleta" is a song by Colombian singers Carlos Vives and Shakira from Vives' fifteenth studio album Vives (2017) and is also included as an album track on Shakira's eleventh studio album El Dorado (2017). The song was written by both singers, and produced by Andrés Castro and it marks Shakira's first collaboration with a fellow Colombian artist. "La Bicicleta" was intended to be representative of both singers' homelands musical styles in Colombia. It is a song with a mixture of various musical elements - vallenato, pop and cumbia and instrumentally, it features indigenous Colombian wind instruments and accordions. Lyrically, it is a nostalgic song, describing the duo's excursion on bikes to places of their childhood. Music critics reviewed the song positively, praising it for its catchiness and inclusion of various Colombian music elements. The song won two Latin Grammy Awards at the 17th Latin Grammy Awards for Song of the Year and Record of the Year.

Amaya Romero Arbizu, also known as simply Amaia, is a Spanish singer and pianist. She gained national recognition after taking part in series nine of the television talent contest Operación Triunfo, which she won. Romero represented Spain alongside fellow competitor Alfred García at the 2018 Eurovision Song Contest with "Tu Canción". 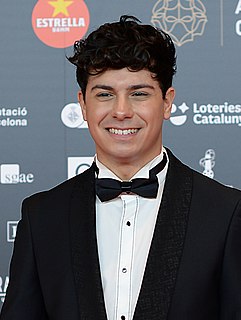 Alfred García Castillo is a Spanish singer-songwriter. He gained national recognition when he took part in series nine of the reality television talent competition Operación Triunfo, where he finished in fourth place, and also represented Spain in the Eurovision Song Contest 2018 in Lisbon, Portugal, alongside Amaia Romero, with the song "Tu canción", finishing in twenty-third place.

Spain participated in the Eurovision Song Contest 2019 with the song "La venda", performed by Miki and written by Adrià Salas. The Spanish broadcaster Televisión Española (TVE) used the tenth series of reality television talent competition Operación Triunfo as the platform to select the Spanish entry for the 2019 contest in Tel Aviv, Israel.

Aitana Ocaña Morales, known mononymously as Aitana, is a Spanish singer. She first gained national recognition in 2017, placing as the runner-up in series nine of the Spanish reality television talent competition Operación Triunfo. While competing on the show, Aitana recorded the single "Lo Malo" with fellow contestant Ana Guerra as part of the songs in the running to represent Spain in the 2018 Eurovision Song Contest. The song became an instant hit in Spain, debuting at number-one and holding the spot for several weeks. Following the competition, Aitana expanded her pre-contract with Universal Music and released her debut solo single "Teléfono" to commercial success and streaming-breaking records. 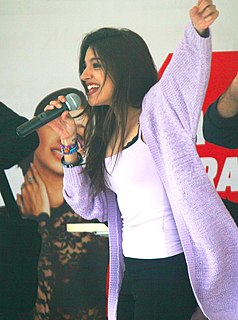 Ana Alicia Guerra Morales, better known as Ana Guerra, is a Spanish singer. She gained national recognition when she took part in series nine of the reality television talent competition Operación Triunfo, where she finished in fifth place.

The Billboard Argentina Hot 100 is the music industry standard record chart in Argentina for songs, published weekly by Billboard and Billboard Argentina magazines. It ranks the most popular songs in Argentina and is compiled by utilizing a formula blending local streaming activity on leading music services such as YouTube, Spotify and Apple Music, among others, as well as national radio airplay and plays of songs featured on a variety of Argentine TV networks. Streaming data is provided by Nielsen Music, while radio and TV measurement is powered by BMAT/Vericast.

In the run up to the 2015 Spanish local elections, various organisations carried out opinion polling to gauge voting intention in local entities in Spain. Results of such polls for municipalities in the Valencian Community are displayed in this article. The date range for these opinion polls is from the previous local elections, held on 22 May 2011, to the day the next elections were held, on 24 May 2015.