Light Italian CubeSat for Imaging of Asteroids (LICIACube) is a 6-unit CubeSat of the Italian Space Agency (ASI). LICIACube is a part of Double Asteroid Redirection Test mission and is built to carry out observational analysis of the Didymos asteroid binary system after DART's impact. It will communicate directly with Earth, sending back images of the ejecta and plume of DART's impact as well as do asteroidal study during its flyby of the Didymos system, 3 days after the Dart's impact. [2] LICIACube is the first purely Italian autonomous spacecraft in deep space, also for the ground segment (GS), with data archiving and processing managed by the Space Science Data Center (SSDC) of ASI.

LICIACube is the first deep space mission developed and autonomously managed by an Italian team: to collaborate towards the design, integration and testing of the CubeSat, the Italian Space Agency has selected the aerospace company Argotec, while the LICIACube GS has a complex architecture based on a mission control center hosted by Argotec, antennas of the NASA Deep Space Network (NASA DSN) and data archiving and processing, managed at the ASI SSDC. The scientific team making this cubesat is led by National Institute of Astrophysics INAF (OAR, IAPS, OAA, OAPd, OATs) with the support of IFAC-CNR and Parthenope University of Naples. The team is enriched by University of Bologna, for orbit determination and satellite navigation, and Polytechnic University of Milan, for mission analysis and optimisation. The LICIACube team includes a wide Italian scientific community, involved in the definition of all the aspects of the mission: trajectory design; mission definition (and real-time orbit determination during operations); impact, plume and imaging simulation and modelling, in preparation of a suitable framework for the analysis and interpretation of in-situ data. The major technological mission challenge, i.e. the autonomous targeting and imaging of such a small body during a fast fly-by, to be accomplished with the limited resources of a CubeSat, is affordable thanks to a strong synergy of all the mentioned teams in support of the engineering tasks.

LICIACube is equipped with two optical cameras for conducting asteroidal reconnaissance during flyby, dubbed LUKE (LICIACube Unit Key Explorer), a narrow field of view (FoV) camera and LEIA (LICIACube Explorer Imaging for Asteroid), a wide FoV imager with an RGB Bayer pattern infrared filter. These will capture scientific data telling about the composition of the asteroid and inform its autonomous system by finding and tracking the asteroid throughout the encounter. Due to it being released in a phase when DART will gear up for its intentional impact, it plans to take a image every 6 seconds during the DART's impact period with preliminary targets of flyby being to take 3 high resolution images telling about the asteroid's morphology and rest being concentrating on the physics of the asteroid and plume generations after impact. This may help in characterising the consequences of the impact.

After the launch, the CubeSat remains enclosed within a spring-loaded box and thus is piggybacked with Double Asteroid Redirection Test (DART), almost the entire duration of DART's mission. It will separate shortly by kicking out of a that box situated on (DART) spacecraft at roughly 4 km/h (2.5 mph), 10 days before impact to acquire images of the impact and ejecta as it drifts past the asteroid, 3 days after the impact. [3] [4] [5] [6]

After the flyby, it will spend a few weeks time in sending the data to the ground team and may die off or look for another potential asteroid visit depending on its health and remaining propellant stored in it after the flyby.

It is built with the aim of achieving: 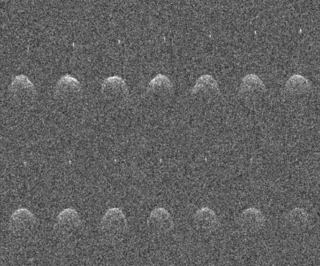 65803 Didymos is a sub-kilometer asteroid and synchronous binary system that is classified as a potentially hazardous asteroid and near-Earth object of both the Apollo and Amor group. The asteroid was discovered in 1996 by the Spacewatch survey at Kitt Peak, and its small 160-metre minor-planet moon, named Dimorphos, was discovered in 2003. Due to its binary nature, the asteroid was then named Didymos, the Greek word for 'twin'.

Europa Clipper is an interplanetary mission in development by NASA comprising an orbiter. Planned for launch in October 2024, the spacecraft is being developed to study the Galilean moon Europa through a series of flybys while in orbit around Jupiter.

Artemis 2, is the second scheduled mission of NASA's Artemis program, and the first scheduled crewed mission of NASA's Orion spacecraft, currently planned to be launched by the Space Launch System (SLS) in May 2024. The crewed Orion spacecraft will perform a lunar flyby test and return to Earth. This is planned to be the first crewed spacecraft to travel beyond low Earth orbit since Apollo 17 in 1972. Formerly known as Exploration Mission-2 (EM-2), the mission was renamed after the introduction of the Artemis program. Originally, the crewed mission was intended to collect samples from a captured asteroid in lunar orbit by the now canceled robotic Asteroid Redirect Mission.

Mars Cube One was a Mars flyby mission launched on 5 May 2018 alongside NASA's InSight Mars lander mission. It consisted of two nanospacecraft, MarCO-A and MarCO-B, that provided a real-time communications link to Earth for InSight during its entry, descent, and landing (EDL) on 26 November 2018 - when InSight was out of line of sight from the Earth. Both spacecraft were 6U CubeSats, and the mission was a test of new miniaturized communications and navigation technologies. These were the first CubeSats to operate beyond Earth orbit, and aside from telecommunications they also tested CubeSats' endurance in deep space. On 5 February 2019, NASA reported that both the CubeSats had gone silent by 5 January 2019, and are unlikely to be heard from again. In August 2019, the CubeSats were honored for their role in the successful landing of the InSight lander on Mars.

The Near-Earth Asteroid Scout is a planned mission by NASA to develop a controllable low-cost CubeSat solar sail spacecraft capable of encountering near-Earth asteroids (NEA). The NEA Scout will be one of 10 CubeSats to be carried with the Artemis 1 mission into a heliocentric orbit in cis-lunar space on the maiden flight of the Space Launch System (SLS) planned to launch in 2022. The most likely target for the mission is 1991 VG, but this may change based on launch date or other factors. After deployment in cislunar space, NEA Scout will perform a series of lunar flybys to achieve optimum departure trajectory before beginning its two-year-long cruise.

BioSentinel is a planned low-cost CubeSat spacecraft on a astrobiology mission that will use budding yeast to detect, measure, and compare the impact of deep space radiation on DNA repair over long time beyond low Earth orbit. 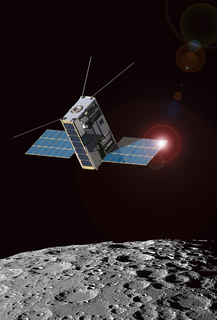 Lunar IceCube is a planned NASA nanosatellite orbiter mission to prospect, locate, and estimate amount and composition of water ice deposits on the Moon for future exploitation by robots or humans. It will fly as a secondary payload mission on Artemis 1, the first flight of the Space Launch System (SLS), planned to launch in 2022.

LunIR is a planned nanosatellite spacecraft that will fly by the Moon and collect surface spectroscopy and thermography. It is planned to fly as a secondary payload on the Artemis 1 mission in 2022.

CubeSat for Solar Particles (CuSP) is a planned nanosatellite spacecraft that will study the dynamic particles and magnetic fields that stream from the Sun.

ArgoMoon is a nanosatellite that will fly on NASA's Artemis 1 mission into a heliocentric orbit in cislunar space on the maiden flight of the Space Launch System (SLS) and the Orion spacecraft, in 2022. The satellite has the dimensions of a shoe box ; in CubeSat terms, it is a 6U. 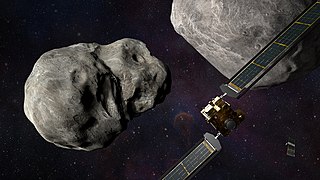 The Double Asteroid Redirection Test (DART) is a NASA space mission aimed at testing a method of planetary defense against near-Earth objects (NEOs). In September 2022, a space probe is set to deliberately crash into the minor-planet moon Dimorphos of the double asteroid Didymos to assess the future potential of a spacecraft impact to deflect an asteroid on a collision course with Earth through a transference of momentum.

These are tables of space probes which have been deliberately destroyed at their objects of study, typically by hard landings or crash landings at the end of their respective missions and/or functionality. This endeavor not only precludes the hazards of orbital space debris and planetary contamination, but also provides the opportunity in some cases for terminal science given that the transient light released by the kinetic energy may be available for spectroscopy; the physical ejecta remains in place for further study. Even after soft landings had been mastered, NASA used crash landings to test whether Moon craters contained ice by crashing space probes into craters and testing the debris that got thrown out.

Earth Escape Explorer (CU-E3) is a nanosatellite of the 6U CubeSat format that will demonstrate long-distance communications while in heliocentric orbit.

Team Miles is a type of nanosatellite called 6U CubeSat that will demonstrate navigation in deep space using innovative plasma thrusters. It will also test a software-defined radio operating in the S-band for communications from about 4 million kilometers from Earth. Team Miles will be one of ten CubeSats to be carried with the Artemis 1 mission into a heliocentric orbit in cislunar space on the maiden flight of the Space Launch System (SLS) and the Orion spacecraft, scheduled to launch in 2022.

OMOTENASHI is a small spacecraft and semi-hard lander of the 6U CubeSat format that will demonstrate low-cost technology to land and explore the lunar surface. The CubeSat will also take measurements of the radiation environment near the Moon as well as on the lunar surface. Omotenashi is a Japanese word for "welcome" or "Hospitality".

MANTIS is a mission concept that would flyby 14 asteroids covering a wide range of types and masses, and obtaining remote sensing and in-situ data. This mission would explore the diversity of asteroids to understand the Solar system's history, its present processes, and hazards. The concept was proposed in 2019 to NASA's Discovery Program to compete for funding and development.