Lake Managua (Spanish : Lago de Managua, [maˈnaɣwa] ), also known as Lake Xolotlán (Lago Xolotlán), is a lake in Nicaragua. At 1,042 km², it is approximately 65 kilometres (40 mi) long and 25 kilometres (16 mi) wide. Similarly to the name of Lake Nicaragua, its other name comes from the Nahuatl language, possibly from the Spanish Tlaxcalan and Mexica allies or the Nawat Nicarao that were already there in today Rivas Department.[ citation needed ] The city of Managua, the capital of Nicaragua, lies on its southwestern shore.

There are two uninhabited lake islands:

The level of Lake Managua raises significantly during the periods of heavy rain. The highest water level was recorded during the flooding of 1933. [1]

The lake rose 3 metres (10 ft) in five days during Hurricane Mitch in 1998, destroying the homes of many who lived on its edge. An even higher flooding occurred in September/October 2010. [1] Since then, the city has prohibited residential use of the most flood-prone areas, those with the elevation below 42.76 meters above sea level. [1]

Lake Managua has been described by some authors as "the most contaminated lake in Central America." [1] The lake has been severely polluted, mostly by decades of sewage being dumped into the lake. [2] The city sewers have drained into the lake since 1927. [1] It was only in 2009 that a modern wastewater treatment plant (built and operated by the British company Biwater) was opened in Managua, but even it treats only 40% of the city's wastewater. [1]

The lake today has no stable outlet, with only occasional floods to Lake Nicaragua through the Tipitapa River. Pollutants are thus concentrated. [3] Despite the pollution, some of the people of Managua still live along the lake's shores and eat the fish. [1]

In 2007 the malecón area was dredged, and the sediment hauled off on barges. A strong odor which permeated the area from the sediment disappeared. A stone rip-rap and concrete wharf was constructed, and a sightseeing boat called La Novia de Xolotlán makes hour-long lake tours when there are sufficient tourists.

While joined to Lake Nicaragua, the bull sharks of that lake cannot migrate to Lake Managua due to a 12-foot-high (3.7 m) waterfall on the Tipitapa River. [3] 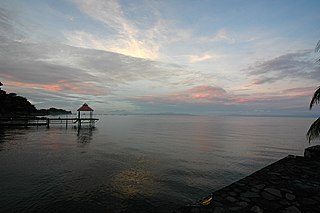 Lake Nicaragua or Cocibolca or Granada is a freshwater lake in Nicaragua. Of tectonic origin and with an area of 8,264 km2 (3,191 sq mi), it is the largest lake in Central America, the 19th largest lake in the world and the tenth largest in the Americas, slightly smaller than Lake Titicaca. With an elevation of 32.7 metres (107 ft) above sea level, the lake reaches a depth of 26 metres (85 ft). It is intermittently joined by the Tipitapa River to Lake Managua.

Nicaragua, officially the Republic of Nicaragua, is the largest country in the Central American isthmus, bordered by Honduras to the northwest, the Caribbean to the east, Costa Rica to the south, and the Pacific Ocean to the southwest. Managua is the country's capital and largest city. As of 2015, it was estimated to be the second largest city in Central America. The multi-ethnic population of six million includes people of mestizo, indigenous, European and African heritage. The main language is Spanish. Indigenous tribes on the Mosquito Coast speak their own languages and English. 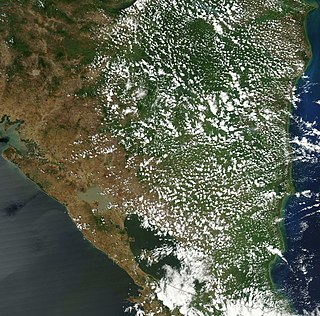 Managua is the capital and largest city of Nicaragua, and the center of an eponymous department. Located on the southwestern shore of Lake Managua and inside the Managua Department, it has an estimated population of 1,055,247 in 2020 within the city's administrative limits and a population of 1,401,687 in the metropolitan area, which additionally includes the municipalities of Ciudad Sandino, El Crucero, Ticuantepe and Tipitapa. 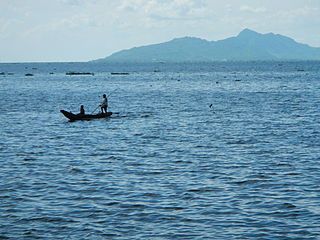 Laguna de Bay, also known as Laguna Lake, is the largest lake in the Philippines. It is located southeast of Metro Manila, between the provinces of Laguna to the south and Rizal to the north. A freshwater lake, it has a surface area of 911–949 km², with an average depth of about 2.8 meters and an elevation of about one meter above sea level. The lake is shaped like a crow's foot, with two peninsulas jutting out from the northern shore and filling the large volcanic Laguna Caldera. In the middle of the lake is the large island of Talim. 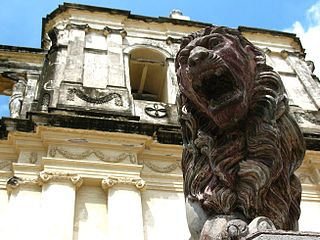 León is the second largest city in Nicaragua, after Managua. Founded by the Spanish as Santiago de los Caballeros de León, it is the capital and largest city of León Department. As of 2021, the municipality of León has an estimated population of 212,504. 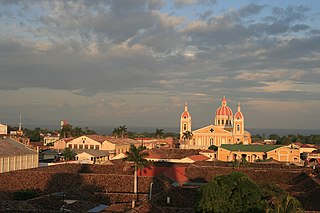 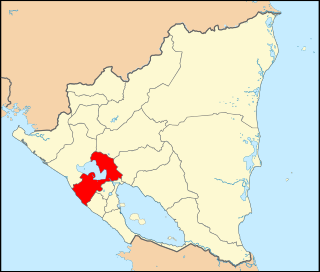 Managua is a department in Nicaragua. It covers an area of 3,465 km2 and has a population of 1,559,774, making it the country's most populated department. The capital is the city of Managua, which is also the capital of Nicaragua. The department has two coastlines, on the Pacific Ocean and on Lake Managua, but does not border Lake Nicaragua. 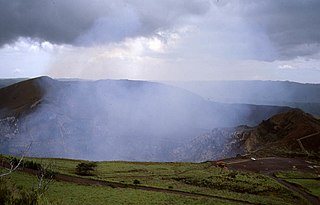 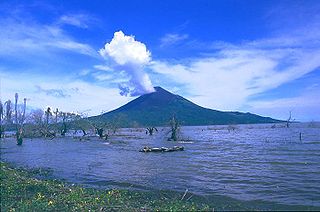 Momotombo is a stratovolcano in Nicaragua, not far from the city of León. It stands on the shores of Lago de Managua. An eruption of the volcano in 1610 forced inhabitants of the Spanish city of León to relocate about 48 km (30 mi) west. The ruins of this city are preserved at León Viejo. It also erupted in 1886, 1905, and most recently November 30, 2015. 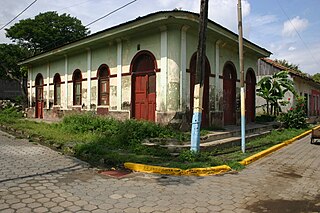 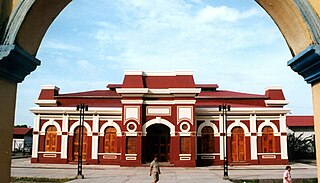 The history of rail transport in Nicaragua began in 1860s, with the first plans for a railway in Nicaragua. The first line was opened in 1882. In the past, there were 1,067 mm gauge railways on the Pacific coast, connecting major cities. A private 1,435 mm gauge line operated on the Atlantic coast. 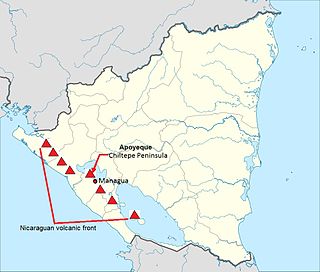 Ruins of León Viejo is a World Heritage Site in Nicaragua. It was the original location of León. It is the present location of the town of Puerto Momotombo in the Municipality of La Paz Centro of the Department of León. It is administered by the Instituto Nicaragüense de Cultura.

Chungará is a lake situated in the extreme north of Chile at an elevation of 4,517 metres (14,820 ft), in the Altiplano of Arica y Parinacota Region in the Lauca National Park. It has a surface area of about 21.5–22.5 square kilometres (8.3–8.7 sq mi) and has a maximum depth of about 26–40 metres (85–131 ft). It receives inflow through the Río Chungara with some minor additional inflows, and loses most of its water to evaporation; seepage into the Laguna Quta Qutani plays a minor role.

The geology of Nicaragua includes Paleozoic crystalline basement rocks, Mesozoic intrusive igneous rocks and sedimentary rocks spanning the Cretaceous to the Pleistocene. Volcanoes erupted in the Paleogene and within the last 2.5 million years of the Quaternary, due to the subduction of the Cocos Plate, which drives melting and magma creation. Many of these volcanoes are in the Nicaraguan Depression paralleled by the northwest-trending Middle America Trench which marks the Caribbean-Cocos plate boundary. Almost all the rocks in Nicaragua originated as dominantly felsic continental crust, unlike other areas in the region which include stranded sections of mafic oceanic crust. Structural geologists have grouped all the rock units as the Chortis Block.

Wikimedia Commons has media related to Lake Managua .
This page is based on this Wikipedia article
Text is available under the CC BY-SA 4.0 license; additional terms may apply.
Images, videos and audio are available under their respective licenses.