Lakis Petropoulos (Greek : Λάκης Πετρόπουλος, 29 August 1932 – 30 June 1996) was a Greek football player and manager. He played for Panathinaikos and capped 3 times for Greece. [1] He was member of the national side for the 1952 Olympic Games.

Giorgos Kalafatis was a Greek football pioneer, player, coach, track and field athlete and the founder of Panathinaikos football club. 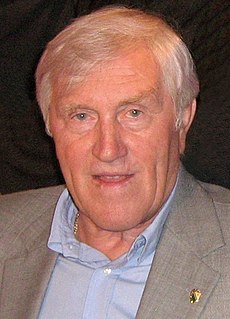 Jacek Wojciech Gmoch is a former Polish footballer, who later became a trainer and selector of the Polish National Team. 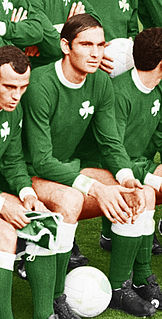 Antonis Antoniadis is a Greek footballer. He scored 187 goals in a career which spanned 22 years. He started his career at 1964 playing for Aspida Xanthi before moving to Panathinaikos on 31 July 1968. Antoniadis scored his first official goal for Panathinaikos on 27 October 1968 in a 1–0 victory over Apollon Athens. When he was playing in Xanthi, he was a goalkeeper because of his height. His nickname is The Tall. Iraklis Football Club is a Greek football club based in the city of Thessaloniki, Macedonia, Greece. The club currently competes in the fourth tier of the (amateur) Macedonia Football Clubs Association championships, the eighth and last tier of football in the region of Thessaloniki, through a successor club named Iraklis 2015 F.C.. It plays its home matches at Kaftanzoglio Stadium.

Byron Stewart Dinkins is a retired American professional basketball player who played two seasons in the NBA, from 1989 to 1991. He played college basketball for UNC Charlotte. After his stint in the NBA Dinkins pursued a professional career in Greece.

Gabriel Rodrigues dos Santos, commonly known as just Gabriel, is a Brazilian footballer, who plays primarily as a wing-back down the right hand side of the pitch; he is currently playing for Miami Dade FC.

Djamel Abdoun is an Algerian retired footballer who used to play as a winger.

Damien Jérôme Jean Richard Plessis is a French footballer who lastly played for Örebro SK in the Swedish Allsvenskan. He is also the younger brother of professional footballer Guillaume Plessis.

Nikos Kovis, known as Niko Kovi in Turkey, is a Turkish-Greek football player and manager. He was a central defender. He was born in Istanbul.

The 2009–10 season was Panathinaikos' 51st consecutive season in Super League Greece. The 2009–10 season was very successful for Panathinaikos. At the summer transfer window the club bought Djibril Cissé from Marseille, Kostas Katsouranis from Benfica, Sebastian Leto from Liverpool and various other players spending more than €35 million. The team managed to enter the final 16 of Europa League and win the Greek Championship. Panathinaikos completed the domestic double by winning the Greek Cup final.

Giorgos Machlelis is a Greek footballer who last played for Platanias.

Aris Football Club is a Greek professional football club based in the city of Thessaloniki, Macedonia, Greece, part of the multi-sports club A.C. Aris Thessaloniki. Aris is one of Greece's most successful clubs, having won the fourth most Super League titles after Olympiacos, Panathinaikos and AEK Athens, while they are tied with PAOK. Created in 1914 as Aris Thessaloniki Football Club, the club was a founding member of the Macedonian Football Clubs Association, as well as the Hellenic Football Federation. The colours of the club are golden/yellow, a dominant colour in the culture of Macedonia and reminiscent of the Byzantine heritage of Thessaloniki, and black. It is named after Ares, the ancient Olympian "God of War," associated also with courage and masculinity, whose image is portrayed on the club's logo as depicted in the Ludovisi Ares sculpture.

Yiannis "Dan" Georgiadis was a Greek football player and manager.

Miltiadis "Miltos" Papapostolou was a Greek football player and manager.

Giorgos Koutroubis is a Greek professional footballer who plays as a centre-back for OFI.

The 2014–15 season is the Panathinaikos' 56th consecutive season in Superleague Greece.