A Lancaran is a type of sailing ship used in the Nusantara archipelago. Although similar in shape to Mediterranean galleys, lancaran was the backbone of the regional fleet before Mediterranean influence came. [1]

The term lancaran is derived from Malay word lancar, which means "swift", "fast", "not hindered", and "velocity without effort". Thus the word lancaran may be interpreted as "swift vessel". [2]

Lancaran is swift, local ship propelled by oars and sails with two quarter rudders, one on either side of the stern. Lancarans were taller than galley but equalled them in length. [3] They had one, two, or three masts, with junk sail or tanja sails (canted rectangular sail). Lancarans had a crew of between 150 and 200 crew. Lancaran can be equipped with several lela (medium cannon equivalent to falconet) and swivel guns of cetbang and rentaka variety. One distinguishing feature from the galley is the presence of an elevated fighting platform (called a balai), in which warriors usually stood and perform boarding actions. [1] Cargo lancaran could carry 150 tons of cargo. The lancaran of Sunda had unique masts shaped like a crane, with steps between each so that they are easy to navigate. [4]

Lancaran were used both as warships and for commerce. In the 14th-15th century A.D., Kingdom of Singapura and Sungai Raya each has 100 three-masted lancaran. [5] [6] During the Demak Sultanate attack on Portuguese Malacca of 1513, lancaran were used as armed troop transports for landing alongside penjajap and kelulus, as the Javanese junks were too large to approach shore. [7] Lancaran was the other type of vessels counted by Tome Pires after junks and penjajap upon arriving at a port. [4]

Royal lancaran of Lingga is said to carry 200 men and about the size of large galleas (i.e. larger than ordinary galleys). Regular lancaran of Pasai is said to carry 150 men, and is under the command of Javanese captain. Large ones with 300 crew are said to have been Javanese vessels. In 1520s, smaller lancarans of Bintan and Pahang were armed with only 1 berço (breech-loading swivel gun, likely refers to cetbang), but also had arrows, spears, and fire-hardened wooden spars. Nicolau Pereira's account of 1568 Acehnese siege of Malacca said that Aceh's boats is usually lancaran. It has two row of oars and as long as galleys. [8] An anonymous work depicting the 1568 siege showed a ship with double quarter rudder and 3 masts, corresponds with "lancaran bertiang tiga" (three-masted lancaran) mentioned in Malay texts. [1] 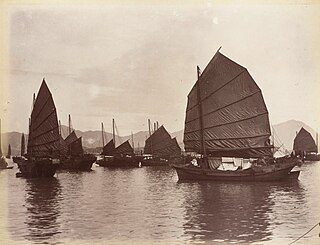 A junk is a type of Chinese sailing ship with fully battened sails. There are two types of junk in China: Northern junk, which is developed from Chinese river boats, and southern junk which is developed from Austronesian ship designs, examples of which have been trading with the Eastern Han dynasty since the 3rd century BCE. They continued to evolve in the later dynasties, and were predominantly used by Chinese traders throughout Southeast Asia. They were found, and in lesser numbers are still found, throughout Southeast Asia and India, but primarily in China. Found more broadly today is a growing number of modern recreational junk-rigged sailboats. Chinese junks referred to many types of coastal or river ships. They were usually cargo ships, pleasure boats, or houseboats. Historically they have ranged in size from small river and coastal vessels to large ocean going ships, and there are significant regional variations in the type of rig, however they all employ fully battened sails.

A launch is an open motorboat. The forward part of the launch’s deck may be covered. Prior to the era of engines on small craft, a launch was the largest boat carried on a sailing vessel, powered by sail or by oars. In competitive rowing, a launch is a motorized boat used by the coach during training.

A galley is a type of ship that is propelled mainly by rowing. The galley is characterized by its long, slender hull, shallow draft, and low freeboard. Virtually all types of galleys had sails that could be used in favorable winds, but human effort was always the primary method of propulsion. This allowed galleys to navigate independently of winds and currents. The galley originated among the seafaring civilizations around the Mediterranean Sea in the late second millennium BC and remained in use in various forms until the early 19th century in warfare, trade, and piracy. 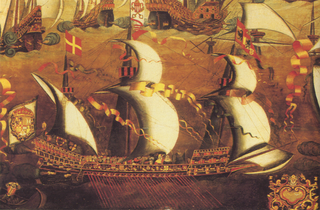 Galleasses were military ships developed from large merchant galleys, and intended to combine galley speed with the sea-worthiness and artillery of a galleon. While perhaps never quite matching up to their full expectations, galleasses nevertheless remained significant elements in the early modern naval armoury for some considerable time.

The Battle of Shancaowan, also known as Battle of Veniaga Island was a naval battle between the Ming dynasty coast guard and a Portuguese fleet led by Martim Afonso de Mello that occurred in 1522. The Ming court threatened to expel Portuguese traders from China after receiving news that the Malacca Sultanate, a Ming tributary, had been invaded by the Portuguese. In addition, the Portuguese had been purchasing slaves on the Chinese coast, to sell in Portuguese Malacca. Portuguese traders were executed in China and a Portuguese embassy was arrested, with their freedom promised on the condition that the Portuguese returned Malacca to its sultan. Martim Afonso de Mello arrived at the Pearl River but was blockaded by a Ming fleet despite his offers of amends. After two weeks without being able to gain a foothold in China they decided to run the blockade and managed to escape with the loss of two ships and several dozen men. The battle was fought off the northwestern coast of Lantau Island, Hong Kong at a location called Sai Tso Wan today.

The Malayan–Portuguese war was an armed conflict involving Malacca forces, Sultanate of Johor and the Dutch East India Company, against the Portuguese Empire.

A turuma was a type of warship built for the Swedish archipelago fleet in the late 18th century. It was specifically developed for warfare in the Archipelago Sea and along the coasts of Svealand and Finland. The turuma was designed by the prolific naval architect Fredrik Henrik af Chapman for use in an area of mostly shallow waters and groups of islands and islets that extend from Stockholm all the way to the Gulf of Finland. 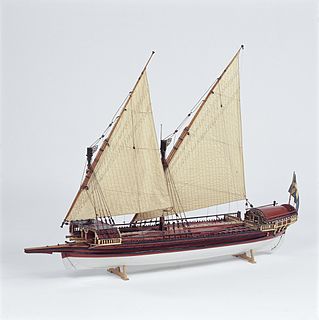 The archipelago fleet, officially the Fleet of the army, was a branch of the armed forces of Sweden which existed between 1756 and 1823. Its purpose was to protect the coasts of Sweden, which was surrounded by a natural barrier of archipelagoes. Throughout its existence, it was a largely independent arm of the army, separate from the navy, with the exception of a few years in the late 1760s. In a number of respects, it was a precursor of the Swedish Coastal Artillery and its coastal fleet. 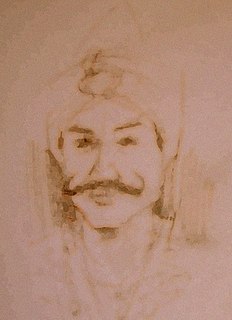 Parameswara, thought to be the same person named in the Malay Annals as Iskandar Shah, was the last king of Singapura and the founder of Malacca. According to the Malay Annals, he ruled Singapura from 1389 to 1398. The king fled the island kingdom after a Majapahit naval invasion in 1398 and founded his new stronghold on the mouth of Bertam river in 1402. Within decades, the new city grew rapidly to become the capital of the Malacca Sultanate. Portuguese accounts, written a hundred years after his death, however, suggest he was from Palembang and usurped the throne of Singapura before he was driven out, either by the Siamese or the Majapahit, and founded Malacca.

The gallivat was a small, armed boat, with sails and oars, used on the Malabar Coast in the 18th and 19th centuries. The word may derive from Portuguese "galeota"; alternatively, it may derive from Maratha "gal hat" - ship. Hobson-Jobson has an extensive discussion of the origins of the term and its usage. 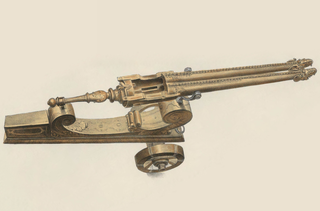 The Cetbang was a type of cannon produced and used by the Majapahit Empire (1293–1527) and other kingdoms in the Indonesian archipelago. The cetbang is a breech-loading cannon, it is different from typical European and Middle Eastern cannons, which are usually muzzleloader. In the Sekar inscription it states that the main production foundries of cetbang were in Rajekwesi, Bojonegoro, whereas the black powder was produced in Swatantra Biluluk (Lamongan). 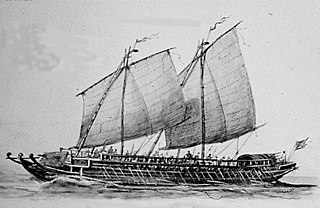 Lanong were large outrigger warships used by the Iranun and the Banguingui people of the Philippines. They could reach up to 30 m (98 ft) in length and had two biped shear masts which doubled as boarding ladders. They also had one to three banks of oars rowed by galley slaves. They were specialized for naval battles. They were prominently used for piracy and slave raids from the mid-18th century to the early 19th century in most of Southeast Asia. The name lanong is derived from Lanun, an exonym of the Iranun people.

Garay were traditional native warships of the Banguingui people in the Philippines. In the 18th and 19th centuries, they were commonly used for piracy by the Banguingui and Iranun people against unarmed trading ships and raids on coastal settlements in the regions surrounding the Sulu Sea.

Penjajap, also pangajava and pangayaw, were native outrigger warships used by several Austronesian ethnic groups in maritime Southeast Asia. They were typically very long and narrow, and were very fast. They are mentioned as being used by native fleets in Indonesia, the southern Philippines, Malaysia, and Brunei. 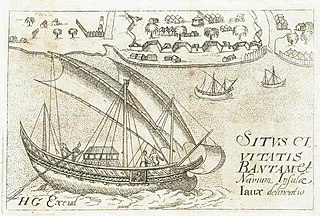 Kelulus or kalulus is a type of rowing boat used in Indonesia. It is typically small in size and propelled using oar or paddle. However, for long distance voyages, this boat can be equipped with sails. It is not the same as prahu kalulis of the eastern part of the Indonesian archipelago. 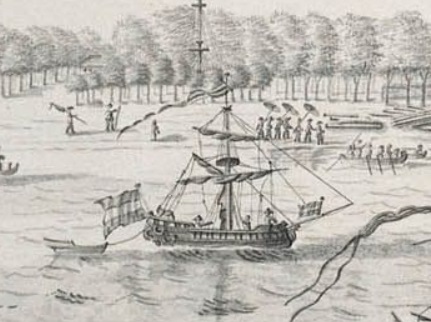 Chialoup was a type of sloop used in the East Indies, a combination of western (Dutch) and Nusantaran (Indonesian) technologies and techniques. Many of these "boat-ships" were produced by VOC shipwrights in Rembang and Juwana, where the majority of the workers were local Javanese. Chialoups were used by the Dutch East India Company and private merchant-sailors of western and Nusantaran origin.

Ghurab or gurab is a type of merchant and warship from Nusantara archipelago. The ship was a result of Mediterranean influences in the region, particularly introduced by the Arabs, Persians, and Ottoman. 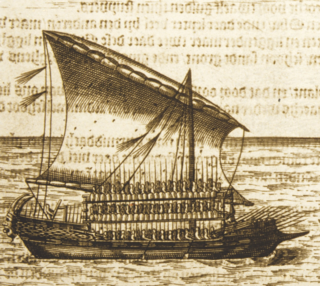 Ghali, gali or gale are a type of galley-like ships from the Nusantara archipelago. Several native galley-like ships already existed in the archipelago, some with outriggers. The design of ghalis is the result of the impact made by Mediterranean shipbuilding techniques on native shipbuilding, introduced particularly by Arabs, Persians, Ottoman Turks, and Portuguese. The terms may also refer to Mediterranean vessels built by local people, or native vessels with Mediterranean influence.

Java arquebus refer to long primitive firearm from Indonesian archipelago, dating back to the last quarter of 15th century. The weapon was used by local armies, albeit in low number compared to total fighting men, before the arrival of Iberian explorers in the 16th century. In historical records the weapon may be classified as arquebus or musket.