Langenberg Wildlife Park (German : Wildpark Langenberg) is a zoo situated in the municipality of Langnau am Albis in the Sihl Valley to the south of the city of Zürich in Switzerland. The wildlife park now forms part of the Zürich Wilderness Park. [1] [2]

The park was founded in 1869 by the Zürich city forester Carl Anton Ludwig von Orelli, making it the oldest Swiss wildlife park. In 2009, the management of the Langenberg Wildlife Park was combined with that of the nearby Sihlwald forest, to form the Zürich Wilderness Park. [2] [3]

Langenberg is home to 16 native or formerly native animals such as bears, beavers, elk, hare, lynxes, wild boar, and wolves. [3] In 2012, European bison and Przewalski’s horse were introduced to the park.

The wildlife park can be reached via the Wildpark-Höfli railway station, served by service S4 of the Zurich S-Bahn.

Langnau am Albis is a village in the district of Horgen in the canton of Zürich in Switzerland. 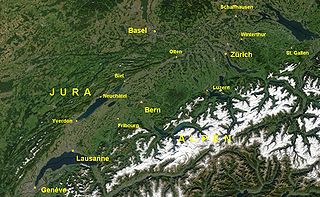 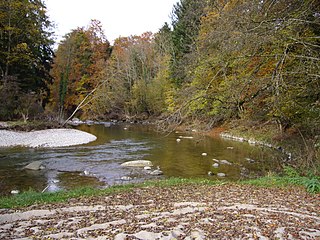 Oerlikon is a quarter in the northern part of the city of Zürich, Switzerland. A formerly independent municipality, Oerlikon was merged with Zürich in 1934 and forms today, together with Affoltern and Seebach, the city district 11. 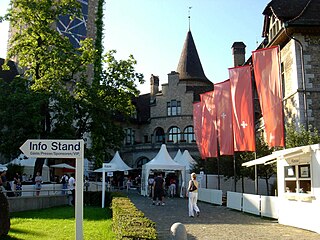 The Swiss National Museum —part of the Musée Suisse Group, itself affiliated with the Federal Office of Culture is located in the city of Zurich, Switzerland's largest city, next to the Hauptbahnhof.

Seebach is a quarter in the district 11 of Zürich, located in the Glatt Valley. 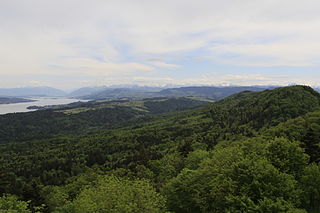 The Sihlwald is a forest and nature reserve in the Sihl Valley of the Swiss canton of Zürich. It is a rare example of a large-scale and original forest, situated on the eastern slopes of the Albis hills to the west side of the Sihl river. Although the forest is owned by the city of Zürich, it is situated outside the city boundary, within the municipality of Horgen and several adjoining municipalities. The Sihlwald now forms part of the Zürich Wilderness Park. 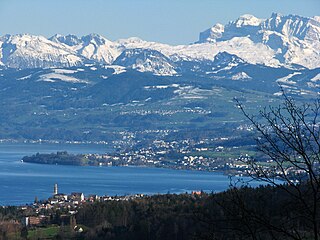 The Au Peninsula is located on the Swiss Zürichsee lake shore in the municipality of Au, Canton of Zürich. 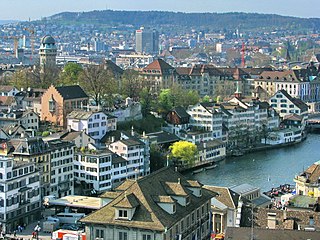 The Lindenhof is a moraine hill and a public square in the historic center of Zürich, Switzerland. It is the site of the Roman and Carolingian era Kaiserpfalz around which the city has historically grown. The hilltop area—including its prehistoric, Roman, and medieval remains—is listed as a Swiss heritage site of national significance. 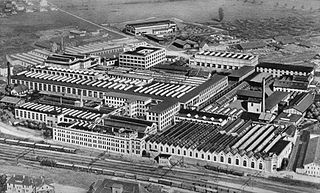 Maschinenfabrik Oerlikon was a Swiss engineering company based in the Zürich district of Oerlikon known for the early development of electric locomotives. It was founded in 1876 by the industrialist Peter Emil Huber-Werdmüller, and occupied a large site immediately to the west of Oerlikon railway station.

Zürich District is a district of the Swiss canton of Zürich in Switzerland.

Sihl Valley is a river valley and belongs to the Zimmerberg-Sihltal region located in the district of Horgen in the canton of Zurich, Switzerland. Commonly Sihltal is used as the name of the Lower Sihl Valley, i.e. the area in the southwest of the city of Zürich. 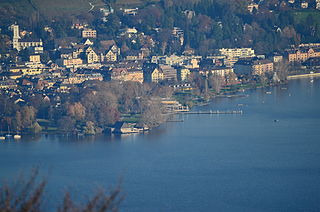 Zürichhorn is a river delta on Zürichsee's eastern shore in the lower basin of the lake. The area is part of the parks and quays in the Seefeld quarter of the city of Zürich in Switzerland. The gardens are one of the most popular recreational areas within the city of Zürich. 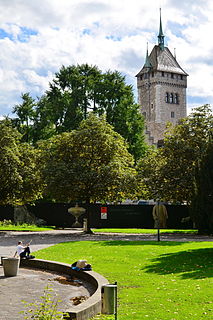 The Platzspitz park is a park in Zurich, located next to the Swiss National Museum.

Wildpark-Höfli is a railway station in the Sihl Valley, and the municipality of Langnau am Albis, in the Swiss Canton of Zurich. The station is on the Sihltal line, which is operated by the Sihltal Zürich Uetliberg Bahn (SZU). It takes its name from the nearby settlement of Höfli, and the Wildpark Langenberg, a nearby zoo.

Zürich Wilderness Park is a wilderness park near the city of Zürich in Switzerland. It includes the Sihlwald forest, the largest mixed deciduous and coniferous forest in the Swiss Mittelland, and the Langenberg Wildlife Park, the oldest Swiss wildlife park. Both sites are situated in the Sihl Valley to the south of Zürich, but are separated from each other by the town of Langnau am Albis. 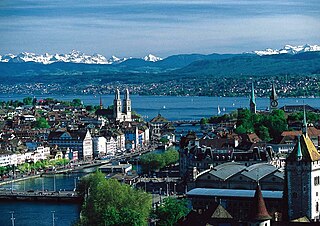 Zürich is the largest city in Switzerland, and the capital of the canton of Zürich. It is located in north-central Switzerland, at the northwestern tip of Lake Zürich. As of January 2020, the municipality has 434,335 inhabitants, the urban area (agglomeration) 1.315 million (2009), and the Zürich metropolitan area 1.83 million (2011). Zürich is a hub for railways, roads, and air traffic. Both Zurich Airport and railway station are the largest and busiest in the country. 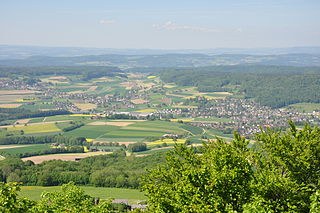 Wehntal is the name of a valley region in the Canton of Zürich in Switzerland.