Lanxess Arena (originally Kölnarena, German for Cologne Arena) is an indoor arena, in Cologne, North Rhine-Westphalia, Germany. It is known as the 18,500-capacity home of the Kölner Haie. The arena opened in 1998 and can accommodate 20,000 people for concerts. With its capacity of 18,500, it is the largest ice hockey arena outside North America.

It is primarily used by Kölner Haie (ice hockey), VfL Gummersbach (handball), Köln RheinStars (basketball), and as a concert venue.

The arena is spanned by a steel arch supporting the roof via steel cables. The height of the arch is 76 m (249 ft) and its weight is 480 tons.

On June 2, 2008, it was announced that Kölnarena would be renamed Lanxess Arena, for a period of ten years. [2] The sponsor, Lanxess AG, is a specialty chemicals group based in the Lanxess Tower in Deutz, Cologne.

Lanxess Arena has been one of the top entertainment venues in Cologne since its opening. Many international artists have performed at the venue, spanning a wide range of music genres. Artists that have performed their concerts at the venue are listed in the table below.

The arena was used for the 2007 World Men's Handball Championship, including the third place game and the final game.

On June 13, 2009, the Ultimate Fighting Championships held UFC 99 at the Lanxess Arena. [28] This was the first time the UFC has made its way to Germany.

The arena was one of the venues for the 2010 IIHF World Championship, including both semi-finals, the Bronze medal game and the Championship game.

On October 8, 2018, the arena hosted an exhibition ice hockey game between Kölner Haie and the Edmonton Oilers, part of the 2018 NHL Global Series Challenge.

On July 5–7, 2019, the arena hosted another edition of the ESL One Cologne, a Counter-Strike: Global Offensive tournament with a prize pool of $300,000.

From July 12 to 13, 2019, the arena will host the 2019 German Darts Masters, part of the Professional Darts Corporation World Series.

The venue will host some group phase matches at the FIBA EuroBasket 2022 which the country and Berlin alongside Czech Republic in Prague, Georgia in Tbilisi and Italy in Milan.

The Kölner Haie are an ice hockey club based in Cologne, Germany that plays in the professional Deutsche Eishockey Liga (DEL). The team was one of the founding members of the DEL. 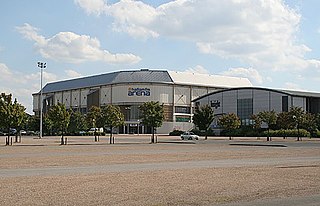 Sheffield Arena is a multi-purpose arena located in Sheffield, England. It is situated near Meadowhall and lies between Sheffield city centre and Rotherham town centre. 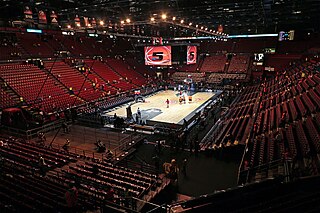 Uwe Gerd Krupp is a German former professional hockey defenceman and former coach of the German national ice hockey team. Widely considered one of the greatest German players of all time, he was the first German-born player to win the Stanley Cup, and the second German-born professional to play in an NHL All-Star Game, after Walt Tkaczuk. Following Tkaczuk, Krupp was only the second German-born player to have a lasting career in the National Hockey League although, unlike Tkaczuk, Krupp spent his formative years in Germany, and arrived in North America as a young but experienced professional.

Minsk Arena is the main indoor arena in Minsk, Belarus.

Ryan Michael Stewart Jones is a Canadian former professional ice hockey right winger. He was drafted in the fourth round, 111th overall, by the Minnesota Wild in the 2004 NHL Entry Draft and played for the Nashville Predators and Edmonton Oilers in the National Hockey League (NHL). He played out the remainder of his professional career with Kölner Haie of the Deutsche Eishockey Liga (DEL).

The 2009–10 EHF Champions League was the 50th edition of Europe's premier club handball tournament and the seventeenth edition under the current EHF Champions League format. It was also the first edition under the new qualifying format. Ciudad Real were the defending champions. The final was played on 30 May 2010, at the Lanxess Arena, home ground of VfL Gummersbach and Kölner Haie, in Cologne, Germany. 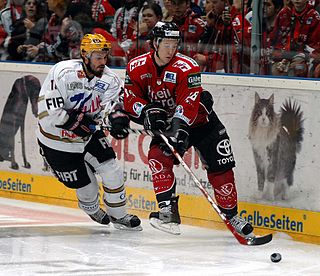 Kai Hospelt is a German professional ice hockey player currently playing for the Ravensburg Towerstars of the DEL2. He was an Olympian at the 2010 Olympic Winter Games in Vancouver, British Columbia, Canada.

Tauron Arena Kraków is an indoor arena located in Kraków, Poland. It has a seating capacity of 15,030 for sporting events. It hosted the 2014 FIVB Volleyball Men's World Championship tournament, 2016 European League of Legends Championship Finals and 2015 IIHF Ice Hockey World Championship Division I.

Maury Edwards is a Canadian professional ice hockey defenceman who is currently playing for Kölner Haie in the Deutsche Eishockey Liga (DEL). 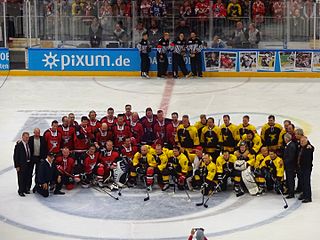 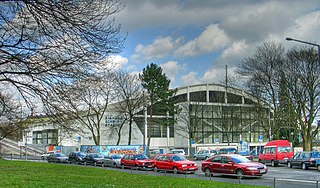 Eis- und Schwimmstadion, is an arena in Cologne, Germany. It is primarily used for ice hockey, and was the home to the Kölner Haie of the Deutsche Eishockey Liga until the Lanxess Arena opened in 1998. It opened in 1936 and holds 7,200 spectators.

ESL, formerly known as Electronic Sports League, is an esports organizer and production company that produces video game competitions worldwide. ESL was the world's largest esports company in 2015, and the oldest that is still operational. Based in Cologne, Germany, ESL has eleven offices and multiple international TV studios globally. ESL is the largest esports company to broadcast on Twitch. 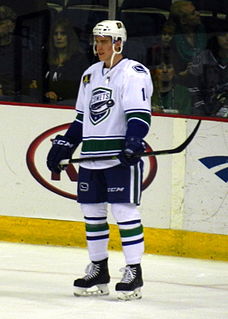 Michael Zalewski is an American professional ice hockey player. He is currently under contract with Kölner Haie of the Deutsche Eishockey Liga (DEL). Zalewski previously played with the Vancouver Canucks of the National Hockey League (NHL). 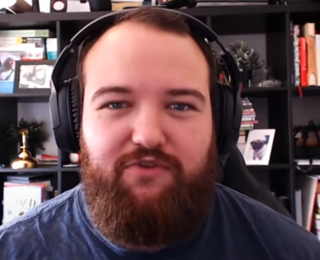 Anders Blume is a Danish Counter-Strike: Global Offensive commentator and co-founder of RoomOnFire. He has been present as a caster at all of the Valve sponsored CS:GO Majors, with the exception of EMS One Katowice 2014. He has worked for a wide variety of tournament organisers including Electronic Sports League (ESL), Dreamhack and Gfinity. He is more often than not paired with Auguste 'Semmler' Massonnat, also a co-founder of RoomOnFire and Jason "Moses" O'Toole, for his casts. He is famous for his energetic casts, including the use of what has become his catchphrase, "Are you kidding me?". In 2015, he won the Golden Joystick award for esports icon of the year.