The Larache expedition occurred in June 1765 when French Navy troops attacked the Moroccan city of Larache following a bombardment of Salé and Rabat. [1] It is an example of the sporadic failure of Western arms against local forces in colonial campaigns. [2]

After the end of the Seven Years' War, France turned its attention to the Barbary corsairs, especially those of Morocco, who had taken advantage of the conflict to attack Western shipping. [3]

A French squadron was led by Duchaffault de Besné, comprising a 52-gun ship Utile and 15 frigates, xebecs and galliots. [3] The 30-gun Héroine was commanded by Captain De Grasse. [3] The xebec Singe was under the command of Pierre André de Suffren de Saint Tropez. [3] It arrived off the coast of Larache on 26 June 1765, after a successful bombardment of Salé between 2 and 11 June. [3]

Larache was bombarded successfully on the 27th and 28th, and the city was evacuated. [3] Some small boats of the French squadron under Captain Latouche Beauregard sailed up the Lixa river, in an attempt to set fire to some Moroccan ships. This force was encircled by the Moroccans. Seven small boats were captured, while nine were able to return to the squadron. 200 French sailors were killed, and 48 were captured and enslaved. [1] [3] One of the captives, Bidé de Maurville, who remained in captivity for two years, wrote in 1775 an account of the expedition, in Relation de l'affaire de Larache. [1]

The captured men are said to have participated in the construction of the city of Essaouira, which was being designed by Theodore Cornut for the ruler of Morocco, Mohammed ben Abdallah.

The fleet was unable to recover the prisoners or to inflict retribution on Moroccan forces. This was a low point for the French Navy, after the Seven Years' War, and before the revival of the French fleet at the end of the 18th century. [3]

The defeat at Larache led to a truce and a treaty between France and Morocco in 1767, with terms which were nevertheless favourable to French trade. [Note 1] 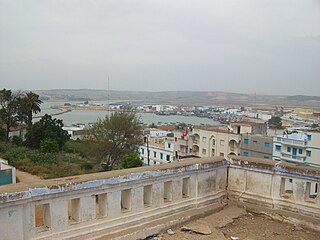 Larache is an important harbour town in the region of Tanger-Tetouan-Al Hoceima in northern Morocco. The town was probably founded by the Banu Arous tribe, who gave it the name Araich Beni Arous.

Mohammed Ben Abdellah al-Khatib was Sultan of Morocco from 1757 to 1790 under the Alaouite dynasty. He was the governor of Marrakech around 1750. He was also sultan briefly during 1748. He rebuilt many cities after the earthquake of 1755, including Mogador, Casablanca, and Rabat, and Abdallah Laroui described him as "the architect of modern Morocco." He is notable for having been the leader of one of the first nations to recognize American independence.

Safi or Asfi is a city in western Morocco on the Atlantic Ocean. It is the capital of Asfi Province. It recorded a population of 308,508 in the 2014 Moroccan census. The city was occupied by the Portuguese Empire from 1488 to 1541, was the center of Morocco's weaving industry, and became a fortaleza of the Portuguese Crown in 1508. Safi is the main fishing port for the country's sardine industry, and also exports phosphates, textiles and ceramics. During the Second World War, Safi was the site of Operation Blackstone, one of the landing sites for Operation Torch.

Robert Duff was an officer of the Royal Navy during the War of the Austrian Succession, the Seven Years' War and the American War of Independence. He rose to the rank of Admiral, and served briefly as colonial governor of Newfoundland.

Théodore Cornut, also Cornout, was a French mathematician and military architect of the 18th century, born in Avignon, who worked for the King of Morocco.

The military history of Morocco covers a vast time period and complex events. It interacts with multiple military events in a vast area containing North Africa and the Iberian peninsula.

The Loukkos River is a major river in northern Morocco. Although it is relatively short, the river is the third largest in Morocco with an average flow of 50 m³/s. The Loukkos river's source is located in the Rif Mountains and flows into the Atlantic Ocean in the city of Larache; the city's port is on the river. The Loukkos river basin is 3,730 km² and contains one of the most fertile and productive agricultural lands in the country. One of the river's tributaries, Oued Makhazine, bears great historical importance since it witnessed one of the most decisive battles in the history of Morocco: the Battle of Alcácer Quibir. In the battle on 4 August 1578, the joint army of deposed Moroccan monarch Abu Abdallah Mohammed II Saadi and his ally, King Sebastian of Portugal, was defeated by the army of the new Moroccan sultan from the same Saadi dynasty.

Lodewijk Count van Bylandt was a Dutch lieutenant-admiral. He gained a certain notoriety in the Affair of Fielding and Bylandt of 1779 and even more in consequence of the refusal of the Dutch navy to put out to sea to combine with the French fleet in Brest in 1783, during the Fourth Anglo-Dutch War, for which refusal many held him responsible. He was court-martialed and exonerated in the first case, and in the second case an inquiry into his conduct was long delayed and eventually quietly abandoned after stadtholder William V had prevailed against the Patriots in 1787. This made his promotion to lieutenant-admiral possible. He died in office as inspector-general and commander of the gunners corps of the navy of the Dutch Republic. 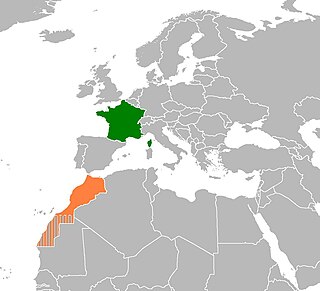 France–Morocco relations are bilateral relations between Morocco and France. They are part of the France–Africa relations.

The Siege of Melilla was an attempt by the British-backed Sultanate of Morocco to capture the Spanish fortress of Melilla on the Moroccan Mediterranean coast. Mohammed ben Abdallah, then Sultan of Morocco, invested Melilla in December 1774 with a large army of Royal Moroccan soldiers and Algerian mercenaries. The city was defended by a small garrison under Irish-born Governor Don Juan Sherlocke until the siege was lifted by a relief fleet in March 1775.

The Invasion of Algiers was a massive and disastrous amphibious attempt in July 1775 by a combined Spanish and Tuscan force to capture the city of Algiers, the capital of The Deylik of Algeria. The amphibious assault was led by Spanish general Alexander O'Reilly and Tuscan admiral Sir John Acton, commanding a total of 20,000 men along with 74 warships of various sizes and 230 transport ships carrying the troops for the invasion. The defending Algerian forces were led by Baba Mohammed ben-Osman. The assault was ordered by the King of Spain, Charles III, who was attempting to demonstrate to the Barbary States the power of the revitalized Spanish military after the disastrous Spanish experience in the Seven Years' War. The assault was also meant to demonstrate that Spain would defend its Moroccan enclaves against any Ottoman encroachment, and reduce the influence that the Barbary states held in the Mediterranean.

Morocco–Portugal relations cover a period of several centuries to the present. Initial contacts started in the 8th century, when Muslim forces invaded most of the territory of the Iberian peninsula. After the Reconquista, Portugal would then expand into Africa, starting with the territory of Morocco, by occupying cities and establishing fortified outposts along the Moroccan coast.

The Battle of Grand Turk was a battle that occurred on 9 March 1783 during the American Revolutionary War. France had seized the Turks and Caicos archipelago, islets of rich salt works, seizing Grand Turk in February 1783. The British responded by deploying 28-gun frigate HMS Albermarle with a force of more than 100 men under the command of Captain Horatio Nelson. Although the mission failed, the islands were restored to Britain in the second Treaty of Paris that formally concluded the war.

The Utile was a 56-gun Bordelois-class ship of the line of the French Navy. She was funded by a don des vaisseaux donation from the States of Flander, and built by engineer Léon Guignace on a design by Antoine Groignard. Completed too late to serve in the Seven Years' War, she served in the Mediterranean before becoming a junk in Rochefort.

Georges-François Godefroy Framond de La Framondie was a French Navy officer. He served in the War of American Independence, earning membership in the Society of the Cincinnati.