Larry Cleo Morris (December 10, 1933 – December 19, 2012) was an American football linebacker. The 1950 graduate of Decatur High School became an All-American at Georgia Tech before his career in the NFL. "The Brahma Bull" was named one of the linebackers on the NFL 1960s All-Decade Team. He was sentenced to probation for his role in the Savings and loan crisis.

Morris was a four-year starter and a two-way player at center and linebacker positions for the Georgia Tech Yellow Jackets. Morris was also selected as three times first-team All-SEC and a team captain as a senior. He played during coach Bobby Dodd's most successful seasons at Georgia Tech. The Yellow Jackets had a 40-5-2 record over Morris’ four seasons, won two SEC titles, four bowl games and a share of the 1952 national championship with a 12-0 record. In his final game as a Yellow Jacket against rival Georgia in Athens on November 27, 1954 he played the entire game and was credited with 24 tackles as his team won 7-3. He was later named to the All-SEC 25-year team spanning 1950–1974 and in 1992 was inducted into the College Football Hall of Fame, one of 12 Tech players there. [1] [2]

Morris was the seventh overall pick of the 1955 NFL draft. He was named one of the linebackers on the NFL 1960s All-Decade Team. Morris played 12 seasons total with the Los Angeles Rams, Chicago Bears, and Atlanta Falcons. He was the MVP of the 1963 NFL Championship Game for the Bears. In addition, he was a member of the Atlanta Falcons' first team in 1966. [3]

Morris was featured in an article in The Sporting News about former football players who suffer from head injuries that happened during their career. According to the article, Morris had little, if any, recollection of his playing days. [6] [7]

Larry Cleo Morris died on December 19, 2012. A native Atlantan, he spent his last few years, since 2009, under nursing home care, at Presbyterian Village, in the city of Austell, Georgia. [8] His brain was donated by his family to Boston University for the study of brain injuries associated with former professional football players. [9]

Bobby Dodd Stadium at Historic Grant Field is the football stadium located at the corner of North Avenue at Techwood Drive on the campus of the Georgia Institute of Technology in Atlanta. It has been home to the Georgia Tech Yellow Jackets football team, often referred to as the "Ramblin' Wreck", in rudimentary form since 1905 and as a complete stadium since 1913. The team participates in the NCAA Division I Football Bowl Subdivision as a member of the Atlantic Coast Conference. It is the oldest stadium in the FBS and has been the site of more home wins than any other FBS stadium. 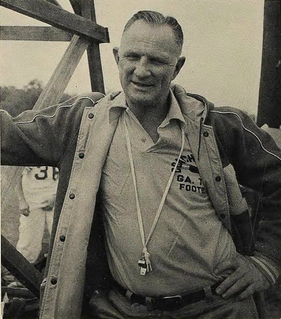 Robert Lee Dodd was an American college football player and coach, college baseball coach, and college athletics administrator. He served as the head football coach at Georgia Tech from 1945 to 1966, compiling a record of 165–64–8. His teams won consecutive Southeastern Conference (SEC) title in 1951 and 1952, and his 1952 Georgia Tech Yellow Jackets football team won the 1953 Sugar Bowl and was recognized as a national champion by a number of selectors through they finished second behind Michigan State in both major polls. Dodd was also Georgia Tech's head baseball coach from 1932 to 1939, tallying a mark of 43–64–2, and the school's athletic director from 1950 until 1976. All together, Dodd served Georgia Tech 57 years in various capacities. 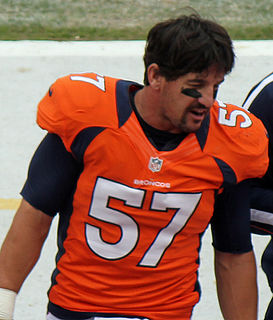 Keith Howard Brooking is a former American football linebacker in the National Football League (NFL). He was drafted by the Atlanta Falcons in the first round of the 1998 NFL Draft and also played for the Dallas Cowboys and Denver Broncos. He played college football at Georgia Tech. Brooking was a five-time Pro Bowl selection with the Falcons. 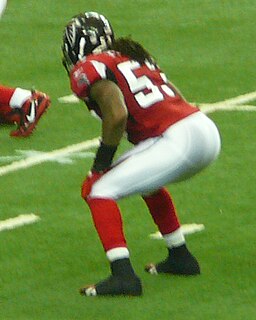 Porter Michael Peterson is an American football coach and former player. He is currently the outside linebackers coach at the University of South Carolina. Peterson played college football at the University of Florida, where he was a member of a national championship team and earned All-American honors. He was a second-round pick in the 1999 NFL Draft and played professionally for thirteen seasons with the Indianapolis Colts, Jacksonville Jaguars and Atlanta Falcons of the National Football League (NFL).

Harold Moreland "Hal" Herring was an American football player and coach. He played college football at Auburn University and professionally as a center and linebacker for the Buffalo Bills in the All-America Football Conference (AAFC) and the Cleveland Browns in the National Football League (NFL). He later was a defensive coach at Auburn and for the NFL's Atlanta Falcons and San Diego Chargers.

Alpette C. Richardson is a former American football linebacker in the National Football League (NFL) who spent six seasons with the Atlanta Falcons. He played college football for the Georgia Tech Yellow Jackets. In his rookie season of 1980, Richardson set the record for most interceptions recorded by a linebacker (7), which he returned for 139 yards, while also recovering three fumbles. He won the AP Defensive Rookie of the Year in 1980 along with Buddy Curry, and made the NFL's All-Pro 2nd team. He finished his career with 9 interceptions, six fumble recoveries, and 9 sacks.

Brick Haley is an American football coach and former player. He most recently was the defensive line coach for the University of Missouri and LSU Tigers football teams.

Philip Gregory Wheeler is an American football linebacker who is currently a free agent. He was drafted by the Indianapolis Colts in the third round of the 2008 NFL Draft. He played college football at Georgia Tech.

Joshua Leonard Nesbitt is a former American football safety for the Buffalo Bills of the National Football League (NFL). He was formerly the starting quarterback for the Georgia Tech Yellow Jackets. 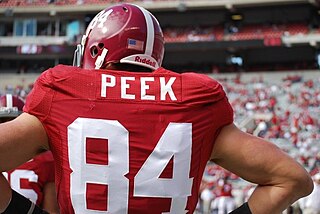 Colin Davis Peek is a former American football tight end. He attended the Georgia Institute of Technology before transferring to the University of Alabama. Peek signed a free agent contract after going undrafted, due to an injury at the NFL Combine, in the 2010 NFL draft. He was part of the Crimson Tide in the 2010 BCS National Championship.

Jacob Thomas Matthews is an American football offensive tackle for the Atlanta Falcons of the National Football League (NFL). He was drafted by the Falcons sixth overall in the 2014 NFL Draft. He played college football at Texas A&M. He is a member of the Matthews family of football players. 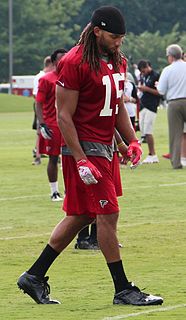 Kevin Lamar Cone is a retired American football wide receiver who is currently the Assistant Director of Football Operations at Georgia Tech. He was signed by the Atlanta Falcons as an undrafted free agent in 2011. 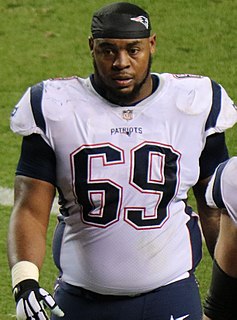 Shaquille Olajuwon Mason is an American football offensive guard for the New England Patriots of the National Football League. Mason played at Georgia Tech from 2011 to 2014 and was drafted by the Patriots in the fourth round of the 2015 NFL Draft. 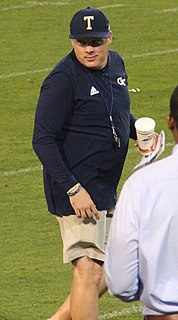 William Geoffrey Collins is an American football coach and former player. On December 7, 2018, Collins was announced as the head coach at Georgia Tech. He was previously the head coach at Temple University, and had served in the past as defensive coordinator for the University of Florida and Mississippi State University.

The 1983 Georgia Tech Yellow Jackets football team represented the Georgia Institute of Technology during the 1983 NCAA Division I-A football season. The Yellow Jackets were led by fourth-year head coach Bill Curry, and played their home games at Grant Field in Atlanta. In their first year as full members of the Atlantic Coast Conference, the team finished in third with a final record of 3–8.