A larva ( /ˈlɑːrvə/ ; plural larvae /ˈlɑːrviː/ ) is a distinct juvenile form many animals undergo before metamorphosis into adults. Animals with indirect development such as insects, amphibians, or cnidarians typically have a larval phase of their life cycle.

The larva's appearance is generally very different from the adult form (e.g. caterpillars and butterflies) including different unique structures and organs that do not occur in the adult form. Their diet may also be considerably different.

Larvae are frequently adapted to different environments than adults. For example, some larvae such as tadpoles live almost exclusively in aquatic environments, but can live outside water as adult frogs. By living in a distinct environment, larvae may be given shelter from predators and reduce competition for resources with the adult population.

Animals in the larval stage will consume food to fuel their transition into the adult form. In some organisms like polychaetes and barnacles, adults are immobile but their larvae are mobile, and use their mobile larval form to distribute themselves. [1] [2]

Some larvae are dependent on adults to feed them. In many eusocial Hymenoptera species, the larvae are fed by female workers. In Ropalidia marginata (a paper wasp) the males are also capable of feeding larvae but they are much less efficient, spending more time and getting less food to the larvae. [3]

The larvae of some organisms (for example, some newts) can become pubescent and do not develop further into the adult form. This is a type of neoteny. [4]

It is a misunderstanding that the larval form always reflects the group's evolutionary history. This could be the case, but often the larval stage has evolved secondarily, as in insects. [5] [6] In these cases the larval form may differ more than the adult form from the group's common origin. [7]

Within Insects, only Endopterygotes show complete metamorphosis, including a distinct larval stage. [9] [10] Several classifications have been suggested by many entomologists, [11] [12] and following classification is based on Antonio Berlese classification in 1913. There are four main types of endopterygote larvae types: [13] [14]

Beetles are insects that form the order Coleoptera, in the superorder Endopterygota. Their front pair of wings are hardened into wing-cases, elytra, distinguishing them from most other insects. The Coleoptera, with about 400,000 described species, is the largest of all orders, constituting almost 40% of described insects and 25% of all known animal life-forms; new species are discovered frequently, with estimates suggesting that there are between 0.9 and 2.1 million total species. Found in almost every habitat except the sea and the polar regions, they interact with their ecosystems in several ways: beetles often feed on plants and fungi, break down animal and plant debris, and eat other invertebrates. Some species are serious agricultural pests, such as the Colorado potato beetle, while others such as Coccinellidae eat aphids, scale insects, thrips, and other plant-sucking insects that damage crops. 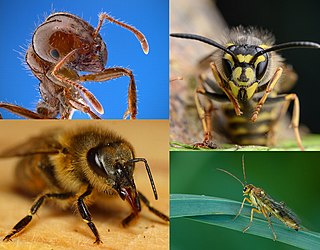 Hymenoptera is a large order of insects, comprising the sawflies, wasps, bees, and ants. Over 150,000 living species of Hymenoptera have been described, in addition to over 2,000 extinct ones. Many of the species are parasitic. Females typically have a special ovipositor for inserting eggs into hosts or places that are otherwise inaccessible. This ovipositor is often modified into a stinger. The young develop through holometabolism —that is, they have a wormlike larval stage and an inactive pupal stage before they mature. 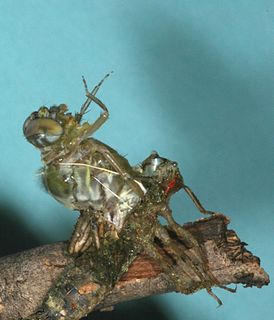 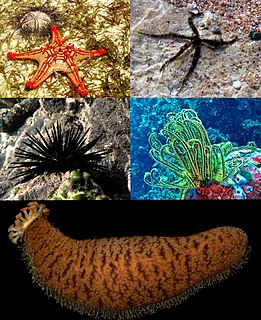 An echinoderm is any member of the phylum Echinodermata. The adults are recognisable by their radial symmetry, and include starfish, brittle stars, sea urchins, sand dollars, and sea cucumbers, as well as the sea lilies or "stone lilies". Adult echinoderms are found on the sea bed at every ocean depth, from the intertidal zone to the abyssal zone. The phylum contains about 7,000 living species, making it the second-largest grouping of deuterostomes, after the chordates. Echinoderms are the largest entirely marine phylum. The first definitive echinoderms appeared near the start of the Cambrian. 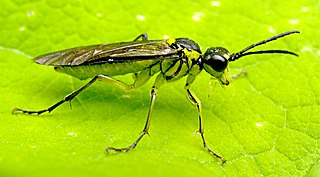 Sawflies are the insects of the suborder Symphyta within the order Hymenoptera, alongside ants, bees, and wasps. The common name comes from the saw-like appearance of the ovipositor, which the females use to cut into the plants where they lay their eggs. The name is associated especially with the Tenthredinoidea, by far the largest superfamily in the suborder, with about 7,000 known species; in the entire suborder, there are 8,000 described species in more than 800 genera. Symphyta is paraphyletic, consisting of several basal groups within the order Hymenoptera, each one rooted inside the previous group, ending with the Apocrita which are not sawflies.

Histeridae is a family of beetles commonly known as clown beetles or Hister beetles. This very diverse group of beetles contains 3,900 species found worldwide. They can be easily identified by their shortened elytra that leaves two of the seven tergites exposed, and their geniculate (elbowed) antennae with clubbed ends. These predatory feeders are most active at night and will fake death if they feel threatened. This family of beetles will occupy almost any kind of niche throughout the world. Hister beetles have proved useful during forensic investigations to help in time of death estimation. Also, certain species are used in the control of livestock pests that infest dung and to control houseflies. Because they are predacious and will even eat other Hister beetles, they must be isolated when collected. 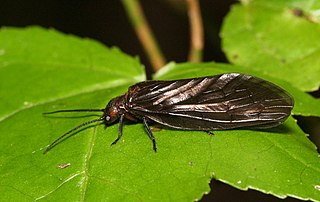 Megaloptera is an order of insects. It contains the alderflies, dobsonflies and fishflies, and there are about 300 known species. 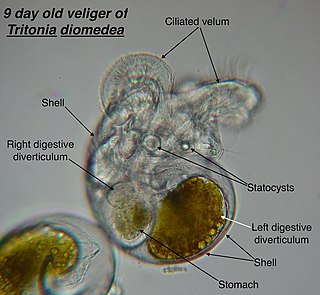 A veliger is the planktonic larva of many kinds of sea snails and freshwater snails, as well as most bivalve molluscs (clams) and tusk shells.

Holometabolism, also called complete metamorphosis, is a form of insect development which includes four life stages: egg, larva, pupa, and imago. Holometabolism is a synapomorphic trait of all insects in the superorder Endopterygota. Immature stages of holometabolous insects are very different from the mature stage. In some species the holometabolous life cycle prevents larvae from competing with adults because they inhabit different ecological niches. The morphology and behavior of each stage are adapted for different activities. For example, larval traits maximize feeding, growth, and development, while adult traits enable dispersal, mating, and egg laying. Some species of holometabolous insects protect and feed their offspring. Other insect developmental strategies include ametabolism and hemimetabolism. 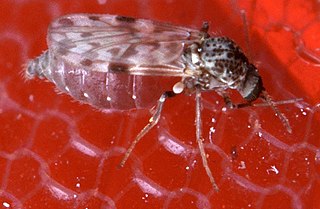 Ceratopogonidae is a family of flies commonly known as no-see-ums, or biting midges, generally 1–3 millimetres in length. The family includes more than 5,000 species, distributed worldwide, apart from the Antarctic and the Arctic.

The soldier flies are a family of flies. The family contains over 2,700 species in over 380 extant genera worldwide. Adults are found near larval habitats, which are found in a wide array of locations, mostly in wetlands, damp places in soil, sod, under bark, in animal excrement, and in decaying organic matter. The Stratiomyinae are a different subgroup that tends to have an affinity to aquatic environments. They are diverse in size and shape, though they commonly are partly or wholly metallic green, or somewhat wasplike mimics, marked with black and yellow or green and sometimes metallic. They are often rather inactive flies which typically rest with their wings placed one above the other over the abdomen. 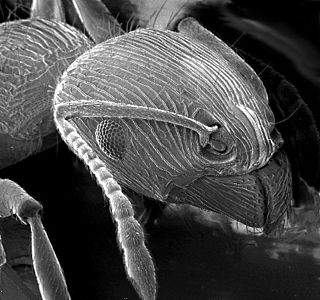 Arthropods are covered with a tough, resilient integument or exoskeleton of chitin. Generally the exoskeleton will have thickened areas in which the chitin is reinforced or stiffened by materials such as minerals or hardened proteins. This happens in parts of the body where there is a need for rigidity or elasticity. Typically the mineral crystals, mainly calcium carbonate, are deposited among the chitin and protein molecules in a process called biomineralization. The crystals and fibres interpenetrate and reinforce each other, the minerals supplying the hardness and resistance to compression, while the chitin supplies the tensile strength. Biomineralization occurs mainly in crustaceans. In insects and arachnids, the main reinforcing materials are various proteins hardened by linking the fibres in processes called sclerotisation and the hardened proteins are called sclerotin. The dorsal tergum, ventral sternum, and the lateral pleura form the hardened plates or sclerites of a typical body segment. 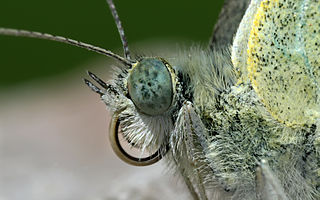 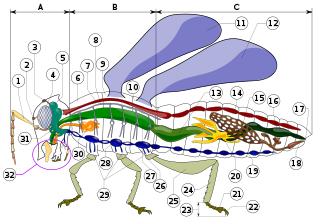 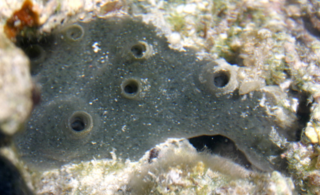 Amphimedon queenslandica is a sponge native to the Great Barrier Reef. Its genome has been sequenced. It has been the subject of various studies on the evolution of metazoan development.

Wikisource has the text of the 1911 Encyclopædia Britannica article " Larval Forms ".