Note: At the 1992 Olympics, Berezhna had one foul in the qualifying round before withdrawing from the competition. 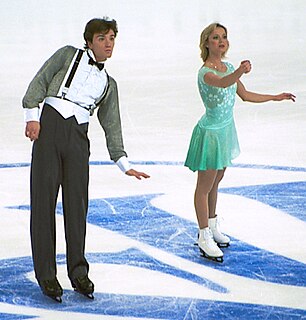 Elena Viktorovna Berezhnaya is a Russian former pair skater. With partner Anton Sikharulidze, she is the 1998 and 1999 World champion, 1998 Olympic silver medalist and 2002 Olympic champion.

Larisa Semyonovna Latynina is a former Soviet artistic gymnast from southern Ukraine. Between 1956 and 1964 she won 14 individual Olympic medals and four team medals. She holds the record for the most Olympic gold medals by a gymnast, male or female, with 9. Her total of 18 Olympic medals was a record for 48 years. She held the record for individual event medals with 14 for 52 years. She is credited with helping to establish the Soviet Union as a dominant force in gymnastics. 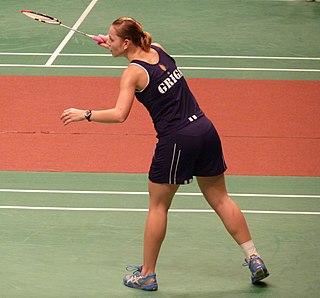 Larisa Valeriïvna Griga is a badminton player from Ukraine. She was the gold medalist at the 2003 European Junior Championships in the girls' singles event. She competed at the 2008 and 2012 Olympic Games.

Joanne Wise is a female former British track and field athlete who competed in the long jump. In 1998, she won the Commonwealth Games gold medal in Kuala Lumpur. She also competed at the Barcelona Olympic Games in 1992 and the Sydney Olympic Games in 2000.

Larisa Yevgenyevna Lazutina is a Russian former professional cross-country skier. Lazutina was awarded the Holmenkollen medal in 1998. In the 1998 Winter Olympics in Nagano, Japan, she won five medals: three gold, one silver and one bronze medal. She was the most successful athlete at the 1998 Winter Olympics. After the Olympics, Boris Yeltsin awarded her the title Hero of the Russian Federation.

Larisa Alexandrovna Peleshenko, née Agapova is a retired Russian shot putter best known for winning the Olympic silver medal in 2000. In her early career she won European Indoor silver medals, but in February 1995 she received a four-year drugs ban. Having originally won the 1995 World Indoor Championships, she lost the medal. She won the 2001 Indoor Championships and finished fourth at the World Championships the same year, and retired at the end of the season.

Larisa Yurievna Selezneva is a Russian former pair skater who represented the Soviet Union. With partner and husband Oleg Makarov, she is the 1984 Olympic bronze medalist, 1985 World silver medalist, 1988 World bronze medalist, and two-time European champion. They were coached by Igor Moskvin.

Larisa Korotkevich is a retired female discus thrower from Russia. Her personal best throw is 71.30 m, achieved on 29 May 1992 in Sochi. This mark ranks her 16th on the all-time discus rankings and, as of 2014, no woman has surpassed that mark since it was set.

Ukraine competed in the 2008 Summer Olympics.

Larisa Leonidovna Petrik is a former Soviet gymnast and Olympic champion. Petrik competed at the 1966 World Championships where she shared in the team silver medal and earned an individual bronze medal on the beam. She also competed at the 1968 Summer Olympics in Mexico City, where she received a gold medal in floor exercise, a gold medal in team combined exercises, and a bronze medal in balance beam. Her gold medal on floor was very controversial because originally, Čáslavská won outright. After the competition was concluded, Petrik's prelims scores were changed to let her tie with Čáslavská, an action which caused Čáslavská to publicly defy the Soviets who had recently invaded her home country.

Larisa Yevgenyevna Kiselyova is a Russian handball player who competed for the Unified Team in the 1992 Summer Olympics.

Deborah Jane Marti is a former high jumper from England, who was born in Switzerland. She represented Great Britain at the Olympic Games in Barcelona 1992 and Atlanta 1996, finishing ninth in the 1992 final. She set her outdoor personal best of 1.94 metres, on 9 June 1996 at a meet in Tallinn. On 23 February 1997 in Birmingham, she cleared 1.95 metres to set a British indoor record, which stood for 17 years (1997–2014). She also won bronze medals at the 1983 European Junior Championships and the 1994 Commonwealth Games.

Inna Vasilyevna Deriglazova is a Russian foil fencer. At the 2016 Rio de Janeiro Olympics, she won the gold medal in the Individual event, where she defeated the Italian champion Elisa Di Francisca She is a 6-time World champion and 4-time European champion

Larisa Yuryevna Belokon is a Soviet breaststroke swimmer who mostly competed in the 100 m and 200 m breastroke and 4 × 100 m medley relay. In these events she won a bronze and two silver medals at the 1981 European Aquatics Championships and three gold medals at the 1983 Summer Universiade. She missed the 1984 Summer Olympics due to the boycott by the Soviet Union and took part in the Friendship Games instead, winning three medals in the same three events.