In European lithostratigraphy, the name "Malm" indicates rocks of Late Jurassic age. [3] In the past, Malm was also used to indicate the unit of geological time, but this usage is now discouraged to make a clear distinction between lithostratigraphic and geochronologic/chronostratigraphic units.

The Late Jurassic is divided into three ages, which correspond with the three (faunal) stages of Upper Jurassic rock:

During the Late Jurassic epoch, Pangaea broke up into two supercontinents, Laurasia to the north, and Gondwana to the south. The result of this break-up was the spawning of the Atlantic Ocean. However, at this time, the Atlantic Ocean was relatively narrow.

Life forms of the epoch

This epoch is well known for many famous types of dinosaurs, such as the sauropods, the theropods, the thyreophorans, and the ornithopods. Other animals, such as crocodiles and the first birds, appeared in the Jurassic. Listed here are only a few of the many Jurassic animals: 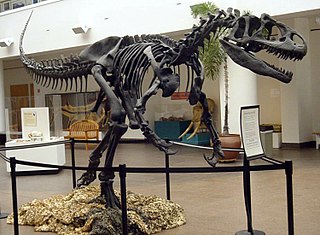 Allosaurus is a genus of carnivorous theropod dinosaur that lived 155 to 145 million years ago during the late Jurassic period. The name "Allosaurus" means "different lizard" alluding to its unique concave vertebrae. It is derived from the Greek ἄλλος and σαῦρος. The first fossil remains that could definitively be ascribed to this genus were described in 1877 by paleontologist Othniel Charles Marsh. As one of the first well-known theropod dinosaurs, it has long attracted attention outside of paleontological circles.

The Jurassic is a geologic period and system that spanned 56 million years from the end of the Triassic Period 201.3 million years ago (Mya) to the beginning of the Cretaceous Period 145 Mya. The Jurassic constitutes the middle period of the Mesozoic Era, also known as the Age of Reptiles. The start of the period was marked by the major Triassic–Jurassic extinction event. Two other extinction events occurred during the period: the Pliensbachian-Toarcian extinction in the Early Jurassic, and the Tithonian event at the end; neither event ranks among the "Big Five" mass extinctions, however. 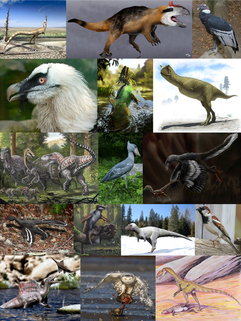 Theropoda or theropods are a dinosaur clade that is characterized by hollow bones and three-toed limbs. They are generally classed as a group of saurischian dinosaurs. Theropods were ancestrally carnivorous, although a number of theropod groups evolved to become herbivores, omnivores, piscivores, and insectivores. Theropods first appeared during the Carnian age of the late Triassic period 231.4 million years ago (Ma) and included the sole large terrestrial carnivores from the Early Jurassic until at least the close of the Cretaceous, about 66 Ma. In the Jurassic, birds evolved from small specialized coelurosaurian theropods, and are today represented by about 10,500 living species. 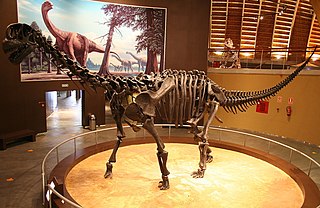 Camarasaurus was a genus of quadrupedal, herbivorous dinosaurs. It was the most common of the giant sauropods to be found in North America. Its fossil remains have been found in the Morrison Formation of Colorado and Utah, dating to the Late Jurassic epoch, between 155 and 145 million years ago.

Ceratosaurus was a carnivorous theropod dinosaur in the Late Jurassic period. This genus was first described in 1884 by American paleontologist Othniel Charles Marsh based on a nearly complete skeleton discovered in Garden Park, Colorado, in rocks belonging to the Morrison Formation. The type species is Ceratosaurus nasicornis. 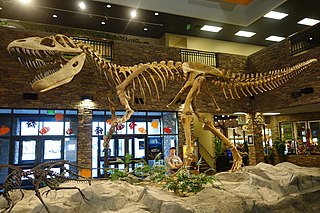 Torvosaurus is a genus of carnivorous megalosaurid theropod dinosaurs that lived approximately 153 to 148 million years ago during the Late Jurassic Period in what is now Colorado and Portugal. It contains two currently recognized species, Torvosaurus tanneri and Torvosaurus gurneyi.

Giraffatitan is a genus of sauropod dinosaur that lived during the late Jurassic Period. It was originally named as an African species of Brachiosaurus (B. brancai), but this has since been changed. Giraffatitan was for many decades known as the largest dinosaur but recent discoveries of several larger dinosaurs prove otherwise; giant titanosaurians appear to have surpassed Giraffatitan in terms of sheer mass. Also, the sauropod dinosaur Sauroposeidon is estimated to be taller and possibly heavier than Giraffatitan. 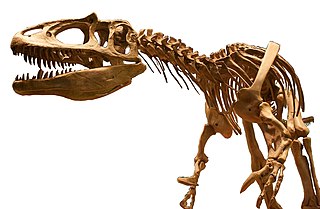 Saurophaganax is a genus of allosaurid dinosaur from the Morrison Formation of Late Jurassic Oklahoma, United States. Some paleontologists consider it to be a species of Allosaurus. Saurophaganax represents a very large Morrison allosaurid characterized by horizontal laminae at the bases of the dorsal neural spines above the transverse processes, and "meat-chopper" chevrons. The maximum size of S. maximus has been estimated at anywhere from 10.5 meters (34 ft) to 13 meters (43 ft) in length, and about 3 metric tons to 4.5 metric tons in weight.

Stokesosaurus is a genus of small, carnivorous early tyrannosauroid theropod dinosaurs from the late Jurassic period of Utah, United States.

Dinheirosaurus is a genus of diplodocid sauropod dinosaur that is known from fossils uncovered in modern-day Portugal. It may represent a species of Supersaurus. The only species is Dinheirosaurus lourinhanensis, first described by José Bonaparte and Octávio Mateus in 1999 for vertebrae and some other material from the Lourinhã Formation. Although the precise age of the formation is not known, it can be dated around the early Tithonian of the Late Jurassic.

Dromaeosauroides is a genus of dromaeosaurid theropod dinosaur from the Early Cretaceous of what is now Denmark. It was discovered in the Jydegaard Formation in the Robbedale valley, on the island of Bornholm in the Baltic Sea. This is the only likely place for dinosaur remains to be discovered on Danish territory, since the Mesozoic deposits exposed in the rest of the country are marine. Dromaeosauroides is the first known dinosaur from this location, and the only one which has been scientifically named. It is one of the oldest known dromaeosaurs in the world, and the first known uncontested dromaeosaur from the Early Cretaceous of Europe.

Lusotitan is a genus of herbivorous brachiosaurid sauropod dinosaur from the Late Jurassic Period of Portugal.

Marshosaurus is a genus of medium-sized carnivorous theropod dinosaur, belonging to the Megalosauroidea, from the Late Jurassic Morrison Formation of Utah and possibly Colorado. 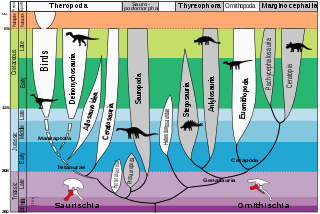 Dinosaurs evolved within a single lineage of archosaurs 243-233 Ma from the Anisian to the Carnian ages, the latter part of the middle Triassic. Dinosauria is a well-supported clade, present in 98% of bootstraps. It is diagnosed by many features including loss of the postfrontal on the skull and an elongate deltopectoral crest on the humerus.

Brachiosaurus is a genus of sauropod dinosaur that lived in North America during the Late Jurassic, about 154–153 million years ago. It was first described by American paleontologist Elmer S. Riggs in 1903 from fossils found in the Colorado River valley in western Colorado, United States. Riggs named the dinosaur Brachiosaurus altithorax; the generic name is Greek for "arm lizard", in reference to its proportionately long arms, and the specific name means "deep chest". Brachiosaurus is estimated to have been between 18 and 21 meters long; weight estimates range from 28.3 to 58 metric tons. It had a disproportionately long neck, small skull, and large overall size, all of which are typical for sauropods. Atypically, Brachiosaurus had longer forelimbs than hindlimbs, which resulted in a steeply inclined trunk, and a proportionally shorter tail.

Elrhazosaurus is a genus of basal iguanodontian dinosaur, known from isolated bones found in Lower Cretaceous rocks of Niger. These bones were initially thought to belong to a species of the related dryosaurid Valdosaurus, but have since been reclassified.