Laughing in the Sunshine

Laughing in the Sunshine (Swedish: Ett kungligt äventyr) is a 1956 British-Swedish film directed by Daniel Birt and starring Jane Hylton, Bengt Logardt and Adolf Jahr. [1] It was his final film. It is sometimes alternatively described as a British-Danish co-production. [2]

Bengt Logardt was a Swedish actor, screenwriter and film director. He appeared in 31 films between 1941 and 1959.

Jean Anderson was an English actress born in Eastbourne, Sussex. She is best remembered for her television roles as hard-faced matriarch Mary Hammond in the BBC drama The Brothers (1972–76) and as rebellious aristocrat Lady Jocelyn "Joss" Holbrook in the Second World War series Tenko (1982–84).

Ragnar Arved Arvedson, was a Swedish actor, director, writer and producer. Arvedson appeared in about 50 roles in films between 1920 and 1970 and directed about 20 films between 1935 and 1949. 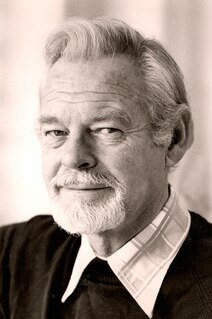 Peter Dyneley was an Anglo-Canadian actor. Although he appeared in many smaller roles in both film and television, he is best remembered for supplying the voice of Jeff Tracy for the 1960s "Supermarionation" TV series Thunderbirds and its two film sequels, Thunderbirds Are Go (1966) and Thunderbird 6 (1968), all produced by Gerry Anderson. Uncredited, Dyneley also provided the voice of the countdown that introduces the Thunderbirds title sequence. 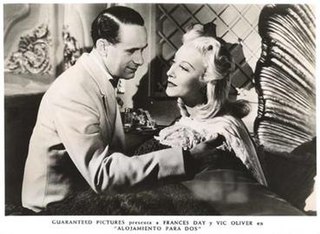 Room for Two is a 1940 British comedy film directed by Maurice Elvey and starring Frances Day, Vic Oliver and Greta Gynt. The film was written by Gilbert Wakefield, based on his 1938 stage farce. The film's Italian setting was overtaken by events, as by the time of its release Fascist Italy had entered the Second World War against Britain.

Johan Adolf Reinhold Jahr, born Johansson was a Swedish film actor. He appeared in 68 films between 1925 and 1962.

The Chinese Bungalow, also known as Chinese Den, is a 1940 British drama film directed by George King and starring Kay Walsh, Jane Baxter and Paul Lukas. It was adapted from the play The Chinese Bungalow by Marion Osmond and James Corbett. King was a former producer of quota quickies who was increasingly working on films with better budgets during the early war years.

Night Train for Inverness is a black and white 1960 British drama film directed by Ernest Morris and starring Norman Wooland, Jane Hylton and Dennis Waterman. It is notable as the film debut of Dennis Waterman. 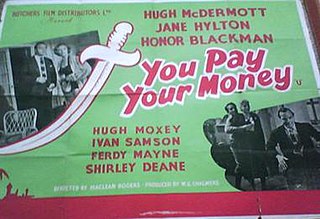 You Pay Your Money is a 1957 British crime drama film directed by Maclean Rogers and stars Hugh McDermott, Jane Hylton and Honor Blackman. The thriller was one of the Butcher's Film Service's 1950s B film genre. 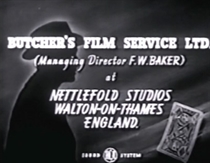 Climb Up the Wall is a 1960 British comedy and musical film directed by Michael Winner and starring Jack Jackson, Glen Mason and Russ Conway. It also includes uncredited appearances by Peter Sellers and Harry Secombe. 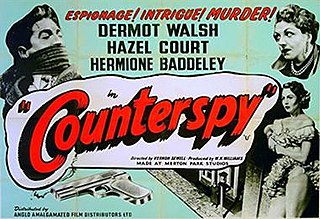 Counterspy is a 1953 British thriller film directed by Vernon Sewell and starring Dermot Walsh, Hazel Court and Hermione Baddeley. It was made at Merton Park Studios, and released in the U.S. as Undercover Agent. A mild mannered accountant comes into possession of secret papers that both the government and a spy ring are after. Alexander Gauge turns in a good performance as a villain rather in the mould of Sydney Greenstreet.

The Man from Yesterday is a 1949 British thriller film directed by Oswald Mitchell and starring John Stuart, Henry Oscar and Marie Burke. It was made at Southall Studios.

The Temptress is a 1949 British drama film directed by Oswald Mitchell and starring Joan Maude, Arnold Bell and Don Stannard. It was made as a second feature at Bushey Studios. It was the final film directed by Mitchell before his death the same year.

Death of an Angel is a 1952 British crime drama film directed by Charles Saunders and starring Patrick Barr, Jane Baxter and Jean Lodge. It was made at the Bray Studios as a second feature.

The Happiness of Three Women is a 1954 British drama film directed by Maurice Elvey and starring Brenda de Banzie, Donald Houston and Petula Clark. The film was released on the Odeon Circuit as a double bill with The Crowded Day. It was made at Walton Studios. It was adapted from Eynon Evans's Welsh-set play of the same name.

There Was a Young Lady is a 1953 British comedy film directed by Lawrence Huntington and starring Michael Denison, Dulcie Gray and Sydney Tafler. It was made at Nettlefold Studios. Huntington had been a prominent director in the 1940s but after this film he dropped into making second features.

Devil's Bait is a 1959 British drama film directed by Peter Graham Scott and starring Geoffrey Keen, Jane Hylton and Gordon Jackson. It was a second feature, made for release by the Rank Organisation.