Laura Keene (20 July 1826 – 4 November 1873) was a British stage actress and theatre manager. In her twenty-year career, she became known as the first powerful female manager in New York. She is most famous for being the lead actress in the play Our American Cousin , which was attended by President Abraham Lincoln at Ford's Theater in Washington on the evening of his assassination.

Keene was born Mary Frances Moss in Winchester, England. She was the fourth and final child of Tomas and Jane Moss (née King). Her aunt was British actress Elizabeth Yates. [1] At the age of 18, she married British Army officer Henry Wellington Taylor (some sources identify Taylor as "John"). [1] [2] Taylor was reportedly the nephew and godson of Arthur Wellesley, 1st Duke of Wellington. [1] The couple had two daughters, Emma (born 1846) and Clara Marie Stella (born 1849). [3] After being discharged from the army, Taylor opened his own tavern. Around 1850, Taylor was arrested, though the nature of his crime is now unknown. After being convicted, he was reportedly sent from England to Australia on a prison ship. [2] [4] Keene would later travel to Australia in order to locate Taylor to divorce him but could never determine his whereabouts. (Some accounts say that Keene did find Taylor but he refused to consent to a divorce.) [1] They remained married until Taylor's death in 1860. [4] [5]

After her husband was sent to prison, Keene was left alone with two children and no money. On the advice of her aunt, she decided to pursue a career as an actress, and would apprentice at her aunt's theatre. [1] [2] As it was then socially unacceptable for a woman with children and no husband to act in the theatre, she changed her name to "Laura Keene". Her now widowed mother Jane took over raising her two daughters. [1]

Keene made her professional debut as Pauline in The Lady of Lyons in London in October 1851. This was followed by performances at London's Royal Olympic Theatre and Royal Lyceum Theatre, including several months working under Madame Vestris. [6] In 1852, less than a year performing in Britain, Keene accepted an offer from James William Wallack to go to New York City, and serve as the leading lady in the stock company at his successful theater. [5] [7]

Her first performance at his theatre was in The Will as Albino Mandeville. She enjoyed great popularity during her time at Wallack's Theatre (20 September 1852, through 22 November 1853). In order to have greater control over her career, she then entered into theater management with the help of John Lutz, whom she married in 1860 and was with her for the rest of her career. [8] She left Wallack's company unexpectedly one night and moved to Baltimore. Keene leased the Charles Street Theater, in Baltimore, from 24 December 1853, to 2 March 1854, where she acted as manager, director and performer. She started doing touring performances in California (6 April through 29 July 1854), in Australia (23 October 1854 through January 1855), and again in California (9 April through 4 October 1855). During the first stint in California, she was hired by Catherine Norton Sinclair to play opposite Edwin Booth. After spending a month as the manager and lessee of the Union Theatre in San Francisco (from 29 June through 29 July 1854), Keene and Booth toured to Australia. Booth's drunken behavior in Australia put an end to their relationship and their tour. On her return to California, she also managed the American Theatre. She managed and performed there for a few years until a new law was passed in California banning any form of entertainment on the Sabbath. This greatly decreased the attendance of theatre performances and gave Keene reason to leave and start a new project in New York.

Upon returning to New York City, Keene leased the Metropolitan Theatre, remodeled it, renamed it Laura Keene's Varieties. She served as manager, director and star performer until 23 December when William Burton, purchased the building, and moved his own operation there. (It was renamed Burton's New Theatre, and then the Winter Garden.)

At this point, she lined up investors, along with an architect who specialized in theaters, and a new theater was constructed to her specifications. Named the Laura Keene's Theatre, it opened on 18 November 1856. In November 1857 she put on The Sea of Ice to financial success.

Stage entertainment turned over quickly in that era, with few productions exceeding a dozen performances, but Keene bucked those odds. An 1857 show called The Elves ran for a record 50 performances. Moreover, 1860 was to prove itself an important year for her theater and American drama as well. On 29 March, she premiered Dion Boucicault's The Colleen Bawn, which ran for six weeks until the end of the season on 12 May; the highlight of this play was the creation of an ocean island on stage in a scene which culminated with the hero diving into the ocean to save the colleen bawn Eily O'Connor. (Betting on the play's success, Boucicault took The Colleen Bawn to London, where it opened on 10 September 1860 and ran for 230 performances, becoming the first long run in the history of English theater.) In November 1860, Keene premiered the musical The Seven Sisters, which featured extravagant sets and ran for 253 performances, an astonishing total for the time. [9]

In 1858, Our American Cousin debuted in Laura Keene's Theater. On the night of 14 April 1865, Keene's company, which primarily included John Dyott and Harry Hawk, were performing Our American Cousin at Ford's Theatre in Washington, D.C. In attendance that night were President Abraham Lincoln and his wife First Lady Mary Todd Lincoln. Actor John Wilkes Booth fatally shot President Lincoln while Lincoln watched the play from the presidential box; Booth then fled the theatre. Amid the confusion, Keene made her way to the presidential box where Lincoln lay dying and cradled the mortally wounded President's head in her lap. [10] President Lincoln's fatal head wound bled on her dress, staining her cuff. The cuff was later donated to the National Museum of American History. [11]

By 1863, Keene was forced to give up managing her own theatre due to poor health. [12] Keene continued as manager and star of a company which toured the United States for most of the next ten years. She also served as manager of the Chestnut Street Theatre in Philadelphia, from 20 September 1869, through 25 March 1870. [13] Her final performance was on 4 July 1873, while touring in northern Pennsylvania.

Our American Cousin is a three-act play by English playwright Tom Taylor. It is a farce featuring awkward, boorish American Asa Trenchard, who is introduced to his aristocratic English relatives when he goes to England to claim the family estate. The play premiered with great success at Laura Keene's Theatre in New York City in 1858, with Keene in the cast, the title character played by Joseph Jefferson, and Edward Askew Sothern playing Lord Dundreary. The play's long-running London production in 1861 was also successful.

Dionysius Lardner "Dion" Boucicault was an Irish actor and playwright famed for his melodramas. By the later part of the 19th century, Boucicault had become known on both sides of the Atlantic as one of the most successful actor-playwright-managers then in the English-speaking theatre. Although The New York Times hailed him in his obituary as "the most conspicuous English dramatist of the 19th century," he and his second wife, Agnes Robertson Boucicault, had applied for and received American citizenship in 1873.

John Johnstone Wallack, was an American actor-manager and son of James William Wallack and Susan Johnstone. He used the stage name John Lester until October 5, 1858, when he first acted under the name Lester Wallack, which he retained the rest of his career. 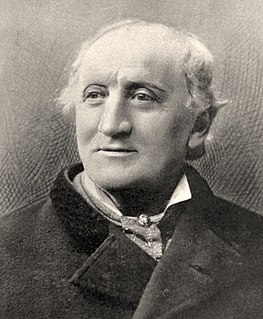 Charles Fisher was an Anglo-American stage actor and comedian. Born to a prolific theatrical family from Norfolk, England, Fisher went on to find success as an actor in different parts of England, and then from 1852 onwards in New York City where he worked as a highly regarded performer for almost 40 years in the companies of William E. Burton, Laura Keene, James William Walluck, and Augustin Daly. 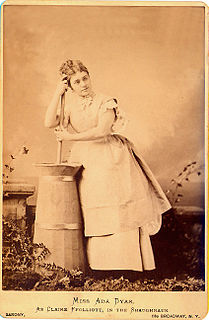 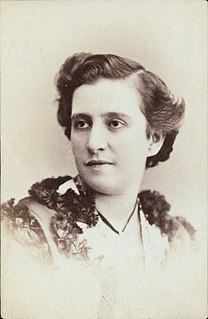 Rose Eytinge was a Jewish American actress and author. She is thought to be the first American actor to earn a three figure salary.

Jean Margaret Davenport, later Mrs. Frederick William Lander, was an English actress with a career in both England and the United States.

The Colleen Bawn, or The Brides of Garryowen is a melodramatic play written by Irish playwright Dion Boucicault. It was first performed at Laura Keene's Theatre, New York, on 27 March 1860 with Laura Keene playing Anne Chute and Boucicault playing Myles na Coppaleen. It was most recently performed in Dublin at the Project Arts Centre in July and August 2010 and in Belfast by Bruiser Theatre Company at the Lyric Theatre in April 2018. Several film versions have also been made.

Events from the year 1860 in Ireland. 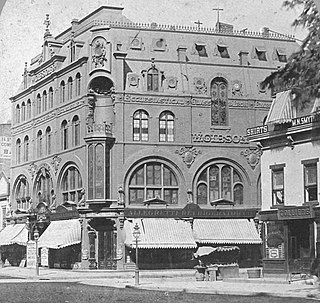 Three New York City playhouses named Wallack's Theatre played an important part in the history of American theater, as the successive homes of the stock company managed by actors James W. Wallack and his son, Lester Wallack. During its 35-year lifetime, from 1852 to 1887, that company developed and held a reputation as the best theater company in the country.

The first theatre in New York City to bear the name The Winter Garden Theatre had a brief but important seventeen-year history as one of New York's premier showcases for a wide range of theatrical fare, from variety shows to extravagant productions of the works of Shakespeare. Initially known as Tripler's Hall or Metropolitan Hall, it burned down in 1854 and was rebuilt as The New York Theatre. Although it burned to the ground several times, it rose from the ashes under different managers, bearing various names, to become known as one of the most important theatres in New York history.

Our American Cousin is a 2008 opera in three acts by American composer Eric Sawyer with libretto by poet John Shoptaw. The opera depicts the assassination of Abraham Lincoln from the standpoint of the actors presenting Tom Taylor's play of the same name at Ford's Theatre at the end of the American Civil War. It aims to offer something new in the realm of American contemporary opera, an American myth told in an unfamiliar way, with both poetic and musical language drawing from the past but refracted through the present.

Harry Hawk was an American actor and comedian, remembered as the only performer on stage at Ford's Theatre at the moment Abraham Lincoln was shot on April 14, 1865.

Abbey's Park Theatre or Abbey's New Park Theatre was a playhouse at 932 Broadway and 22nd Street in what is now the Flatiron District of Manhattan in New York City. It opened as the New Park Theatre in 1874, and was in use until 1882 when it burned down and was never rebuilt as a theatre.

Agnes Kelly Robertson was born in Edinburgh and became a popular actress on the American stage.

Olympic Theatre was the name of five former 19th and early 20th-century theatres on Broadway in Manhattan and in Brooklyn, New York.

Minnie Walton was an Australian-American singer and actress. She began her career in Australia in 1867, moving to California in 1868, where she played the title role in The Colleen Bawn, among others. She performed in the United States until 1874, when she appeared for a season in England playing Mary in Our American Cousin, among other roles. She then made appearances in Australia before returning to California, where she died in 1879.

John Billington was an English actor, for many years a member of the company of the Adelphi Theatre in London.

Blanche Chapman was an American actress. She started in numerous Gilbert and Sullivan productions.